Humphreys and Wheeler Peak in 2 days

The Plan:  Having been snowed out of our summit attempt of Granite Peak in September.  We decided to head to the south to try to bag some peaks before the end of the year.  We decided that we would head to the warmth of Arizona and while we were in the neighborhood, we would head over to New Mexico.  The  plan was to leave Idaho Falls, Idaho Thursday night, drive through the night, arrive in Flagstaff and climb Humprheys Peak, hurry and drive to Taos, get a good nights sleep and climb Wheeler Peak in the morning, then finish up with a 14 hour drive home.

Trip Report:  We left Idaho Falls Halloween night at about 10:30 in a Toyota Sienna mini van with a foam mat in the back.  We tried to keep the driver company while one person got to sleep.  We stopped once for gas in Beaver, Utah and then went on through Page, AZ and on to Flagstaff, AZ.  We pulled into Flagstaff at about 9:00 in the morning, having made pretty good time through the Arizona desert on some pretty good 2 lane roads.  After a quick breakfast at the local Maverick, Adventure's Travel Stop, we drove the 15 minutes to the Arizona Snow Bowl Ski Resort and drove to the easily marked trail head.  There had been scattered snow storms 3 days before we arrived so the lower part of the trail was covered with patchy snow.  We got onto the trail at about 9:30 and the trail was very easy to follow in the packed down snow. 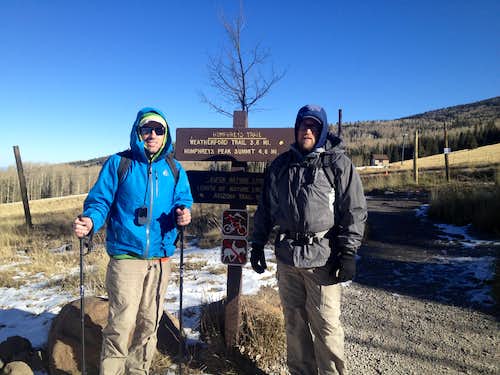 The trail winds through the trees along side the ski resort for about 2 miles.  After breaking the tree line the saddle is within view. 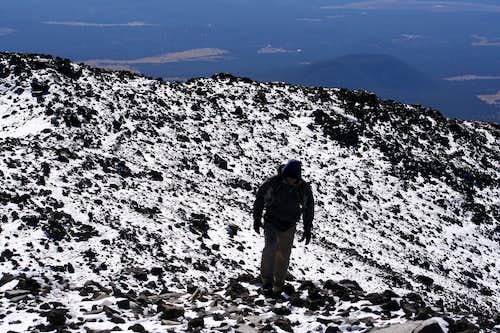 Turning left on the saddle, the trail is well marked with log poles that have been placed in the rocks along the trail about every 1/4 mile or less. 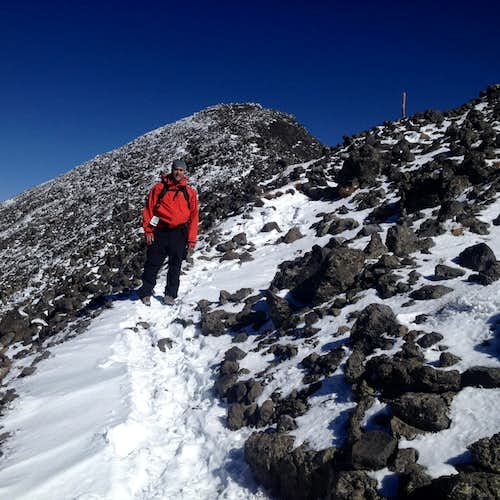 The climb is moderately steep, but feels a little difficult because the altitude does cause some shortness of breath.  There are 3 false summits and the second one is definitely a heart breaker, because I was sure I was finally reaching the summit and was pushing hard for the top, only to see the true summit much further off to the left. We reached the summit at about 1:00.  The view from the summit is spectacular.  It was very clear but windy when we got to the top with about 4 inches of snow.  We had a nice view of the Grand Canyon. 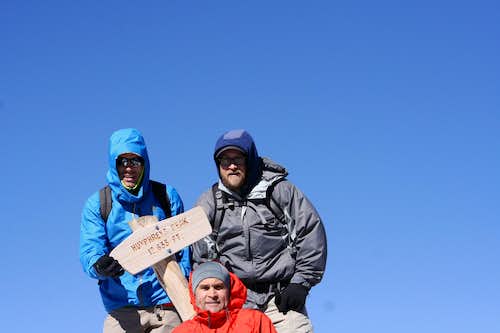 We passed 6 other hikers on our way to the top, and had the summit to ourselves.  We were wearing shells and a fleece jacket under the shell.  We had brought down jackets to wear under the shells, just in case, but it didn't get that cold.  We had hats and gloves and were glad for them at the top as it was pretty chilly up there.  The hike to the top from where we parked was almost 5 miles exactly on our Garmin GPS.  On the way down, we left the trail when we could see the ski slope and walked down the bare ski slope and saved a mile of hiking.  No one seemed to notice or care that we were hiking down the ski hill.  We arrived at our car at 3:00.

We drove to a gas station and grabbed snacks and filled up the tank and headed out for New Mexico.  We drove down I-40 to Albuquerque which is one busy freeway with more semi-trucks than cars.  We made it to Albuquerque at 9:00 and had a nice dinner and jumped back in the car to make the final push for Taos.  We pulled into Taos at 12:30.  The final 40 miles into Taos are down a 2 lane road that is pretty slow going.  We checked in at the no-frills Super 8 showered and passed out.

Saturday started at 7:00 with a hearty no-frills breakfast provided by the Super 8.  We then took the 2 lane road from Taos to Taos Ski Valley.  There are actually some inns located 3 minutes from the Taos Ski Valley resort, and I would recommend staying there if you are looking to get an earlier start on your climb.  However the rooms might be more than the 50 dollars we paid for the Super 8.  We had heard there was snow in Taos but could never get a definitive answer as to how much snow so we were a little anxious about what we would find on the resort.  There was definitely snow on the base of the resort and the road was icy and slick.  The road for the Williams Lake Trail head actually goes past the parking lots and up past the resort for almost 2 miles.  However 1 mile into the ride, the minivan lost traction and got stuck.  We abandoned the van and proceeded on foot up to the trail head.  There was a foot of powder on the ground and it was easy to follow the packed snow of the trail.  We walked right by the Bavarian grill and carried on up the trail.  It is a very nice and easy hike for 2 miles up to the Williams Lake.  We actually started hiking at 8:30 and made it to the lake by 9:30.  The trail is well marked with blue dots painted onto the trees in about 10-15 foot intervals.  When we arrived at the foot of Williams lake, we saw a sign post pointing straight ahead to Williams Lake, where all of the packed trail continued on, and then an arrow to the Left for Wheeler Peak, for which there was not one track in that fresh powder.  We decided to try to find the trail through the trees by connecting the blue dot to dots, and it was fairly easy.  The elevation at Williams lake is about 11,000 feet, and that is after 2 miles hiking.  The trail to the top of Wheeler Peak is only 3 and 1/2 miles, so the last mile is almost a 2,000 foot gain.  We made it to the end of the trees and also the end of the trail, as there were no more dots to connect.  There was a large steep snow filled chute that we climbed that led to the wide snow covered face that was very steep.  It was very disheartening to see the top of the peak so close and to make such slow work of plodding through knee to hip deep snow in our effort to inch our way to the top.  After climbing to within 500 feet of the top, we ran into part of a switch back that had some of the snow blown off of it and we were able to walk on that up to the saddle.  In looking at the saddle, there are 2 tall peaks that look equal in height one to the far left and one to the far right.  The one on the far left has a sign on it, so one might be fooled into thinking that the peak on the left is Wheeler Peak, but it is not.  Turn to the right.  The wind was incredibly powerful on the top.  Easily gusting at 90 mph.  I was fearful that I might turn into a kite and wind up in Texas, but after walking along the saddle and up a small peak and then over the ridgeline, we made it to the summit of Wheeler Peak.  We arrived at the top at about 1:10. 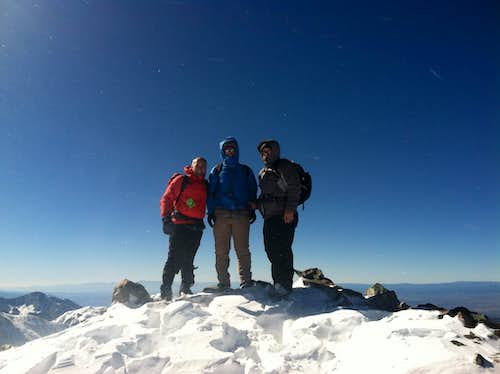 We were able to snap a few pictures but it was too cold to stay very long at the top, it was a very clear day and the views were spectacular, but we had to hustle off of the top.  With the aid of the snow, we were able to fly down the steep snow fields and descended 2000 feet in about 30 minutes.  It was an awesome trip down, a miserable trip up.  We were wearing shells and we all had our down jackets under our shells for the last 300 feet.  We were all wearing water proof hiking shoes and our feet stayed dry and reasonably warm as long as we were moving.  We made it down to the trail head at 3 and with the help of a good Samaritan got our van unstuck and hit the road home.  After a late dinner in Durango, we made it back to Idaho Falls at 4 AM on Sunday.  Almost 33 hours driving with 2 Peaks thrown in between.