Hut to Hut in the White Mountains

When my wife and I first heard about the hut to hut hikes in New Hampshire’s White Mountains, it sounded like a great way to see some fall colors in New England. Having done some backpacking in Glacier National Park in Montana as well as on trips to climb Mt Rainier, Granite Peak and Gannett Peak and soggy fiascos in Alaska, the alternative of a light day pack with breakfast and supper provided along with a bunk was enticing.

Since we have completed many hikes in the western US, we expected the portions of the famous Appalachian trail to be rather straightforward and easy to follow. This was not a good assumption. There was a lot of rock hopping and some route finding required and a map was quickly determined to be a useful addition. We joined the AMC (Appalachian Mountain Club) and the membership benefits quickly equaled the annual cost due to special rates at the huts and on the shuttle bus. We hiked nearly 50 miles during our journey which was a loop from Joe Dodge Lodge at Pinkham Notch hiking to Layfayette Place and catching the shuttle bus back. 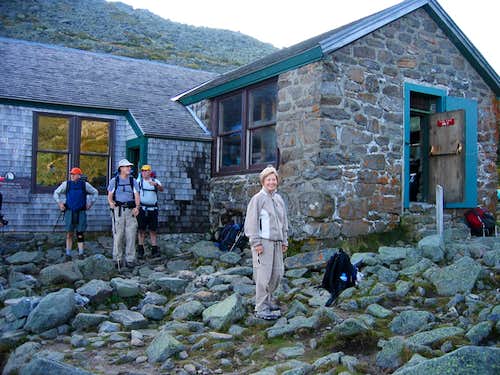 Our trip was a great experience, but could have been much tougher if we hadn’t enjoyed very good weather along the way. Mt Washington, at 6,288’, is known for its extreme weather with high winds and blinding snow storms possible most of the year. Its buttress ridges lie at the intersection of two jet streams which have produced temperatures of 60 below zero and winds of 231 mph. Over the years these lethal conditions have caused over 125 deaths and uncounted desperate survivals.

On September 6, 2006, we flew to Manchester, NH for an adventure trip to the White Mountains. We had made arrangements to hike and spend six nights in AMC huts along the Appalachian Trail (AT). The AMC website enables you to book reservations in advance online. Hut availability 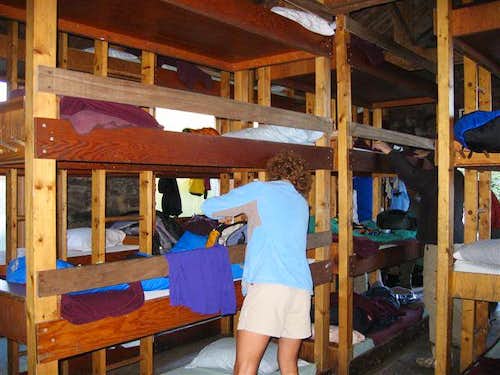 MADISON SPRING HUT - ELEVATION 4800’
After overnighting in Manchester we drove our rental car to Pinkham Notch, where we would return after our trip. We went into the visitor’s center to get directions to the first hut, Madison Springs. How hard could it be; just follow the Appalachian Trail signs, right? 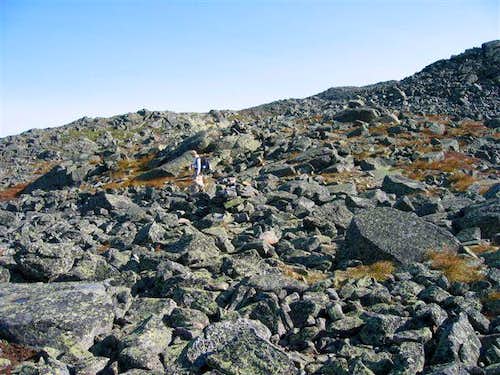 hiking to Lakes of the Clouds

We set off at 10:45a.m., traveling north while following the AT Southbound on a trail called the Old Jackson Road. The weather was moderate and we made good progress at first. We became alarmed when the trail (Great Gulf trail?) trended downward since we knew we had to make at least 3000 feet of elevation. After some deliberation, we continued onward and even further down before we crossed a bridge. Right after that we saw a sign for Madison Springs Hut. At the next intersection, we headed straight and up where the trail turned right finding ourselves on a slightly used trail (Madison Gulf Trail) that quickly faded. 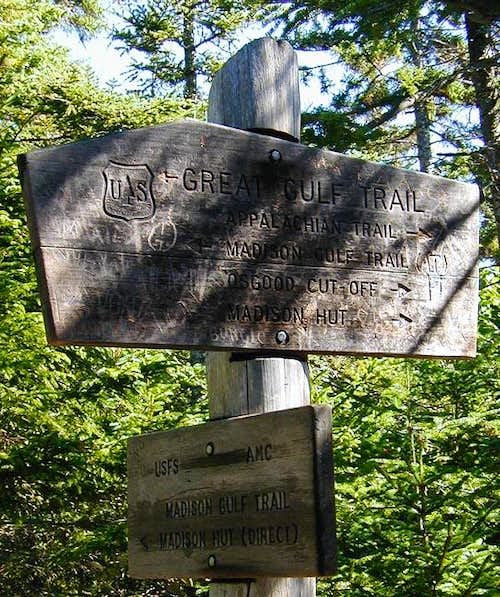 We encountered increasingly more difficult terrain and no discernible trail with only occasional signs of cut downfalls. We followed a creek bed (Parapet brook) upward convinced that we had to start gaining thousands of vertical feet to reach the hut and started climbing up over slippery rocks. About midway up, Jim left Pat to scout ahead. A long time passed (45 minutes?) before Jim returned having spotted a trail at the top. We continued to scramble up and finally reached Madison Hut at 5:00p.m., exhausted. It turned out we had taken a difficult “short cut” instead of the longer winding trail to the hut.

The hut was full. After a nice dinner of chili over rice, we retired. Snoring and creaking and bathroom runs in the bunk room made for a restless night. This was a hard day. Mileage to hut: 7.7 miles, elevation gain 4,050’. 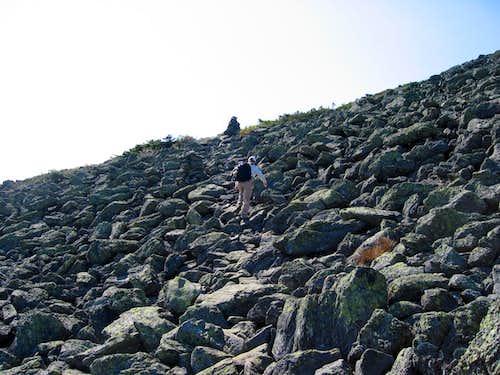 LAKES OF THE CLOUDS HUT - ELEVATION 5012’
We left Madison Springs hut at 8:00a.m., and headed toward Lakes of the Clouds Hut. The route takes the Gulfside trail to Cog railway and the Westside Trail to the Lakes hut, traversing Mt.Washington about 500’ below the summit enroute. 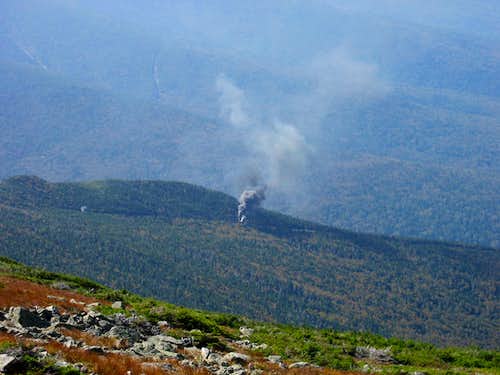 We were among the first to arrive and were assigned to a room for 8. Pat got hot soup, and we relaxed. This is a very popular hut and sleeps 90. It was over capacity due to some through hikers on the AT who were allowed to sleep inside on the floor and fed supper for helping with chores. Dinner was tamale pie, polenta and carrot cake. We started to know a few of the hikers that were hiking to the first three huts. 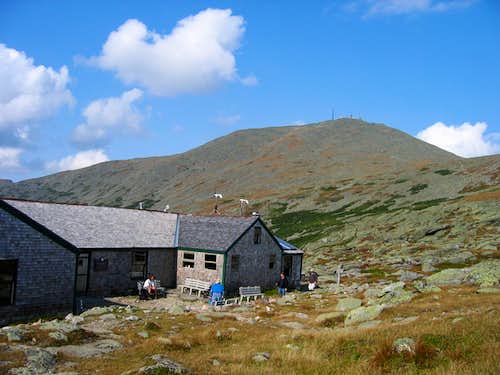 Lakes of the Clouds Hut

One of our bunkmates hung his camelback upside down on a rack above Pat’s pack and when she awoke everything inside was wet and cold. This did not make her happy, but she got over it. It was a medium hard day. Mileage to hut: 6.8 miles, elevation gain: 1850’

MIZPAH SPRINGS HUT - ELEVATION 3800’
This was an easy day taking only three hours to hike to Mizpah Springs Hut. We crossed the summits of Mt. Monroe and Mt. Eisenhower along the way. Mts. Franklin and Pierce also were visible. We arrived at 11:00a.m. Heavy rain commenced about 30 minutes later and into the evening. The hut, which sleeps 60, was again full. Dinner was ham and mashed potatoes with lemon cake. Mileage to hut: 5 miles, elevation gain: 1050’ counting Monroe and Washington. 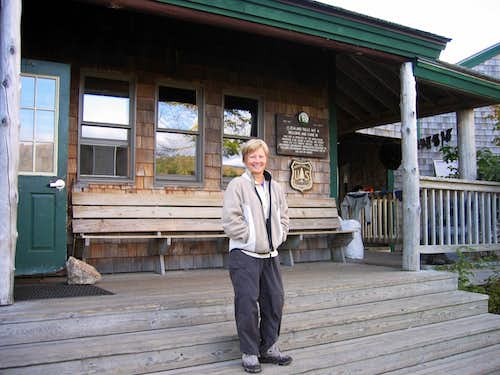 ZEALAND FALLS HUT - ELEVATION 2630’
We left Mizpah at 7:45a.m. The rocky and wet trail dropped down to the Mizpah cutoff and the Crawford Path where Jim slipped, fell and had a broken finger to show for it. After reaching Crawford Notch, we started climbing, Avalon and A-Z trails. It was a hard day of climbing and we did not arrive until 1:00p.m. Pat was really tired and had a small meltdown requiring tea and hot soup. We actually got a private room. This is a smaller hut that sleeps 36 but there were maybe 10 guests that night. Outside was a beautiful waterfall which we enjoyed. Dinner that night was pea soup, pasta with red sauce, pina colada cake. All the meals in the huts are prepared by young people who also provide a bit of entertainment in the evenings, for which they would like a tip! Mileage to hut: 8.1, elevation gain: 2000’ 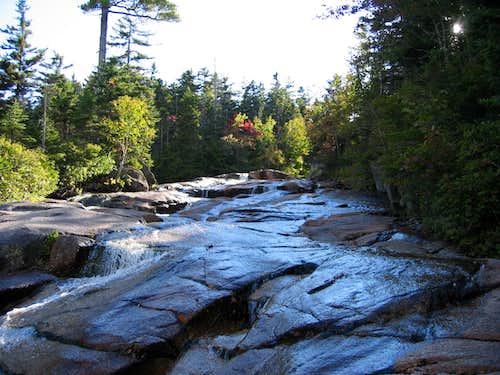 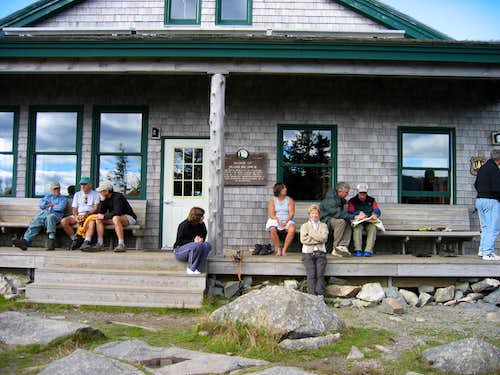 GALEHEAD HUT - ELEVATION 3800’
We left Zealand Falls Hut at 8:00a.m., hiking on the Twinway Trail and passing over Zealand mountain, South Twin and Guyot Peaks and arriving at Galehead about 1:00p.m. This hike rose steeply to Zealand Peak and ended with a steep downhill to the hut. 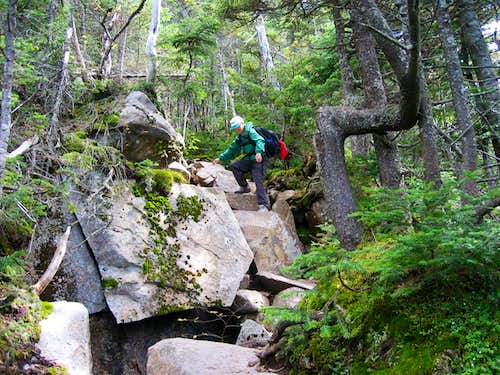 The hut was full including French speaking hikers and thru hikers. Thru hikers were often given free room and board in exchange for work. These thru hikers were nearing the final push of their long journey on the AT. They looked trail weary and scruffy. Dinner was Teriyaki chicken, oatmeal cookies. Mileage to hut 7.7 miles, elevation gain: 3450’ 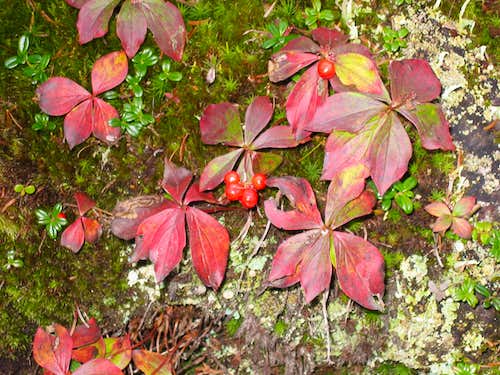 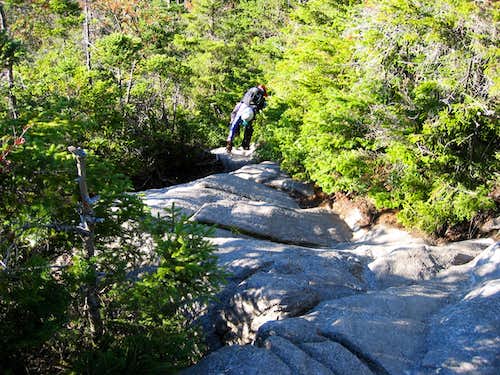 GREENLEAF HUT - ELEVATION 4200’
The hike from Galehead to Greenleaf is known locally as “the death march”. It follows the Garfield Ridge Trail which is notoriously steep and rocky. Pat whined a little and had to be scolded to keep moving. 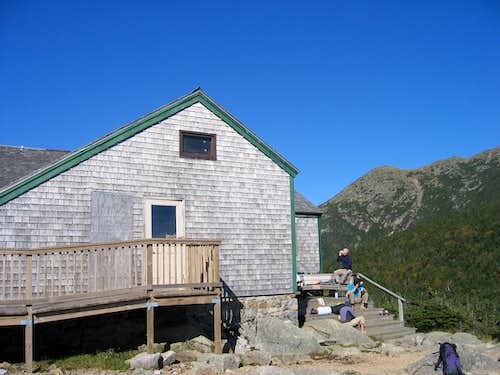 We crossed Mount Garfield and Mount Lafayette summits followed by a steep descent to the hut arriving at 2:00p.m. 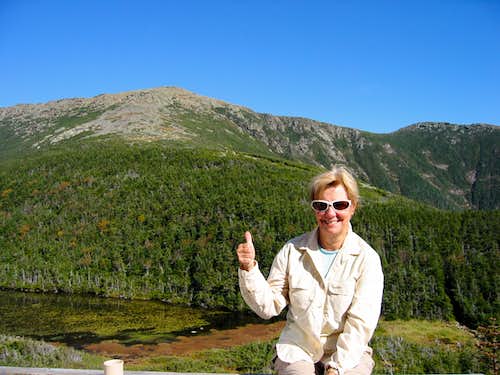 The young hosts were sunbathing on the porch. Pat got potato soup. The evening passed pleasantly as we anticipated our return to civilization the next day. Mileage to hut: 7.7 miles, elevation gain: 2950’ 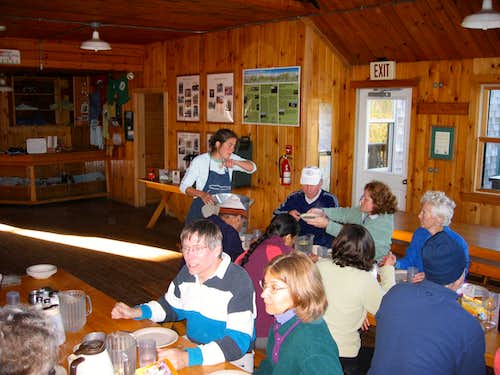 JOE DODGE LODGE, PINKHAM NOTCH.
The morning hike out entailed a drop of 2450’ and 2.9 miles to Layfayette Place where we caught the morning shuttle bus back to the start of our hike at Joe Dodge Lodge. The upper portion of the trail was full of boulders and very difficult. However, the young people who go down for supplies do it in FLIPFLOPS! 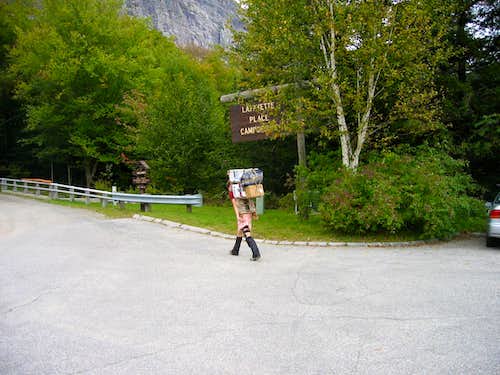 Packing out trash packing in supplies

We got a room at Joe Dodge Lodge and enjoyed a dinner in the restaurant. The next morning we drove back to Manchester to catch our flight home.

Thanks. Can't beat it when the only rainstorm starts and ends while you are enjoying the comforts of the Mizpah Springs hut!

Thanks for posting this report!
Cheers from Austria,
Eric

Glad you enjoyed it. It was just about perfect for my wife and me...not too easy, not too difficult

I've always wondered about a hut to hut trip and what it actually entailed. You did a nice job of the basics and it was great to see people over 40 hiking too!

Thanks for posting this!

Re: Informative but good read!

Some of the toughest hikers I know are in their 70s, but hiking with 20 somethings will open your eyes to some of the perks of youth!

I have also a picture of that sign, and hiked that path with my mother on her 60th birthday. Subsequently, due to the epic nature of that 4 day backpacking trip, I returned to retrace my steps. Unfortunately, this path is striken from all maps I have looked at, and no one at the visitors center had any recollection of this path. I would love if anyone had any geo / coordinates so I can re-find this path.