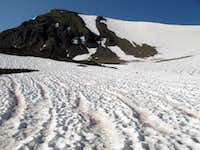 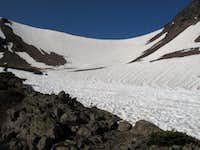 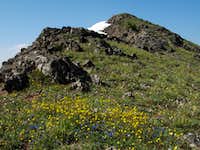 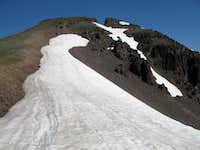 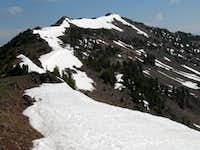 This route is up to 18 miles RT, entailing a total elevation gain of up to around 4500’ and involving some Class 3 and Class 4 terrain (it is not incredibly difficult to keep it at Class 3 if desired). It climbs three unnamed peaks, two of which offer some interesting scrambling, and although it can stand alone, it is also a more challenging and more scenic way to approach Hyalite Peak and/or Divide Peak.

The route traverses Hyalite Ridge between Squaw Creek Divide and the saddle just northwest of Hyalite Peak. It can be done in either direction, but it is probably better to do it from Hyalite Peak to Squaw Creek Divide. There are two principal reasons for this. First, since you likely will be out there in the morning, the sun will be at your back much of the way, making the scenery in front of you more spectacular and making it easier for you to study the route ahead. Second, you will be climbing up on the better scrambling sections, which will be safer and more enjoyable.

Note: This route does not traverse all of Hyalite Ridge, which on maps runs roughly north-south for several miles between Elephant Mountain and Hyalite Peak, crossing several summits, most of them unnamed (one of those summits is Mount Bole, which shares with Mount Chisholm the distinction of being the highest peak in the northern Gallatins). The route this page covers traverses a little less than half of Hyalite Ridge's entirety.

I describe the route from Hyalite Peak to Divide Peak.

The Hyalite Creek Trail starts at about 6900’ and climbs for 5 moderate miles, passing several waterfalls, to a signed junction at about 8900’ in Hyalite Basin. Pretty little Hyalite Lake, a nice spot to camp, is a short walk to the east. At the junction, you can go left to follow a trail up Hyalite Peak or go right to reach Squaw Creek Divide.

Go left and ascend for about 2 miles to a 10,000’ saddle just northwest of Hyalite Peak. It is likely that there will be snowbanks to cross during the last 300-500 vertical feet, and it is also possible that all of Hyalite Basin will be filled with snow and the trail will be indistinguishable. From the saddle, it is less than half a mile and about 300 vertical feet to Hyalite’s summit.

Return to the saddle and then hike up the ridge to Point 10,201, which has an interesting notch in it and allows you to see the rest of the route all the way to Divide Peak. You are likely to notice Point 10,024, the next peak on the ridge, and see that it looks somewhat challenging (and fun).

Descend to a 9700’ saddle and then scramble up Point 10,024, which is, in my opinion, the best peak on this route. The dark volcanic rock that makes up the Gallatins provides excellent traction but can be a little rough on the hands, though you shouldn’t end up shredding them. If you stay on the ridge, you WILL encounter at least Class 3 conditions. It is not especially difficult to keep it at Class 3, but it is also not especially hard to wind up before a Class 4 pitch. If you want to, you can avoid the scrambling by staying below the ridge on its left (south) side, but you will end up having to give back some elevation gained, and you will be hiking up steep talus (and perhaps snow as well). Near the top, the difficulties end and the route returns to just a hike.

Return to Squaw Creek Divide and hike the trail back to the junction in Hyalite Basin. Then enjoy the pleasant hike back down Hyalite Creek to the trailhead. That cold beer or soda in the cooler will taste really good.

The north-facing basins here collect plenty of snow and keep it well into the summer. I have seen the trails mostly clear in Mid-July, and I have also seen them buried and thus indistinguishable. Having an ice axe and a good map (and the ability to use both) is strongly recommended.

Because of the likelihood of snow blocking the trails in the upper basins, it is a good idea to carry an ice axe. Also strongly recommended is the Fridley Peak USGS quad. 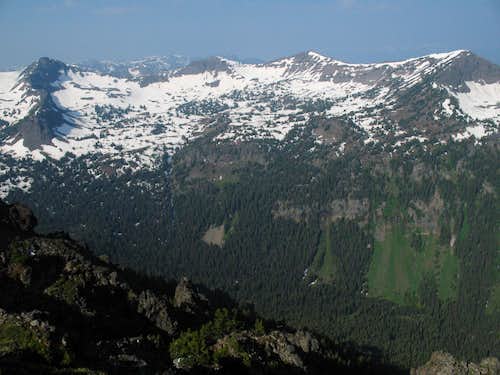 The traverse as seen from Overlook Mountain; Divide Peak is to the right. 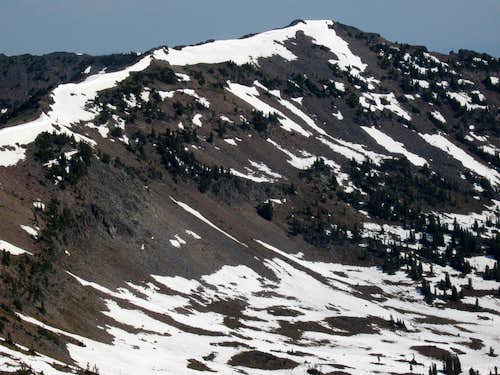