With the wife and kids away, what better time to try to sneak in a solo trip up Hyndman.  Though Hyndman Creek Road is unmarked, the directions on the Hyndman “parent” post are pretty good.  Just keep driving past this guy: 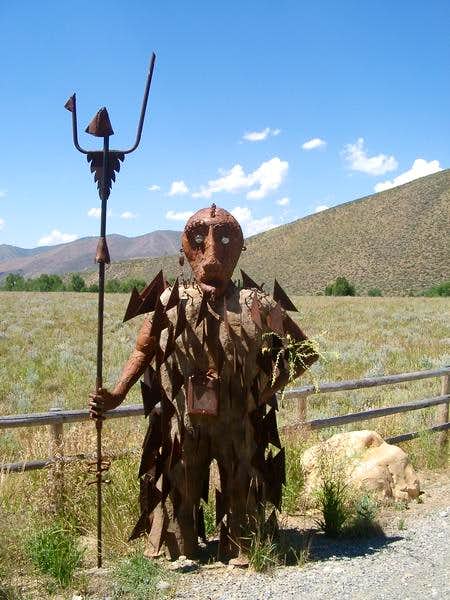 and ignore then head-scratcher of a sign on this dead-end road “No Parking. No Turnaround”.  (Imagine the pile-up at the end if that were true.)  I pulled in after 6pm and set up camp at the trailhead.  Four other cars were there, but no other car campers.  Presumably the others belonged to backpackers who used this spot as their launch.

Hit the trail at 7am the next morning under beautiful skies.  Strolled peacefully for a few hours before I ran across other humans:  A young couple emerging out of the scree field and heading back down the trail.  I asked if they had made the top, and they said no.  While headed for the saddle between Hyndman and Old Hyndman, they tacked too soon and took a line up the younger Hyndman that led into some rock walls.  Pointing to a mangled thumb, the guy indicated their efforts to navigate a tricky line proved unsuccessful.  Despite the set-back, the pair was in good spirits and wished me luck.  Even the guy’s bloody and possibly-broken appendage was convalescing in the thumbs-up position, itself encouraging me to make the summit.

I planned to follow the loose consensus of the few trip reports I consulted earlier in the week, which recommended heading all the way to the saddle and then following the ridgeline to the peak.  The Mangled Thumb Guy’s advice -- “do not turn up too soon” -- only confirmed my thinking. The trek to the saddle was somewhat of a slow slog, bouldering across a few false saddles and pausing to consider whether the better route here is closer to Hyndman or Old Hyndman.  (Probably the former.)

After nearing the saddle ridge, at last I turned left to face my goal.  I scrambled along parallel to the ridge for a while until I noticed a little gap in the ridgeline that offered a clear (and protected) view of the north side.  From my research, I knew the north side was an exposed drop, but that knowledge did little to prepare my nerves for peeking into the abyss.  Here is a shot from my perch, with my back to the void. 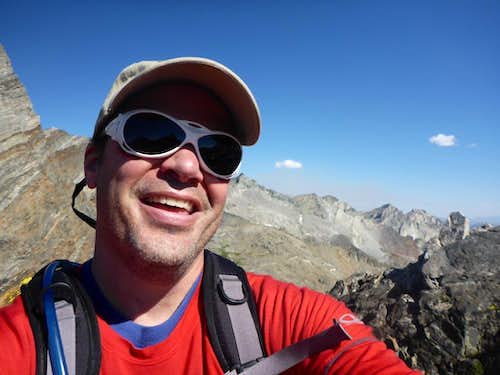 Peeking over the North Side

From the north side, the summit of Hyndman looks more pointy and precarious than the peak from which the Grinch nearly disposed of the Hoos presents. 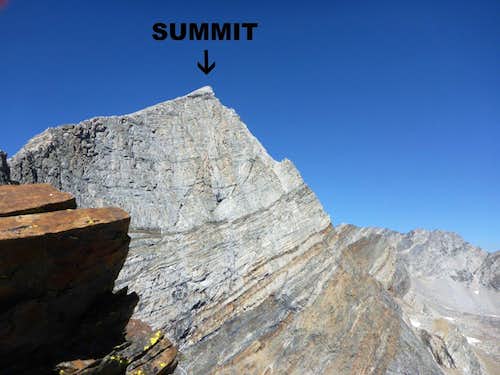 Enough of that.  I climbed down an overly safe distance from the ridgeline and then resumed my parallel course to the summit.  Moments later, though, I came to an impasse.  Well, I call it an impasse anyway.  In reality, it was an unexpected 10+ foot high vertical wall with a number of potential handholds.  (I came to the conclusion about handholds only after looking at my pictures, because at the time I was not remotely in possession of any notion of climbing it….solo….near (in my mind) to the northern exposure….without ability to see what was on the other side.) 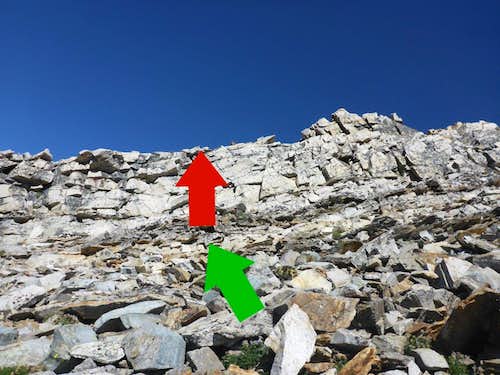 Instead, there was only one option, also unattractive.  I had to descend in order to ascend.  Probably only hundred vertical feet or so, but it was hard to give up any altitude that you know you have to earn back.  By now I had been dropping dotted lines worthy of a Family Circus cartoon.  So feeling a bit tired and less resistant to the occasional thought to abort, I decided it was time simply to beeline to the summit.  Moments later, I came across a cairn -- useless for its intended purpose, because there was no semblance of a trail here, but quite valuable to my spirits: Not only had other humans had walked here (though none yet on this day), other humans were saying I’m on the right (if invisible) path. 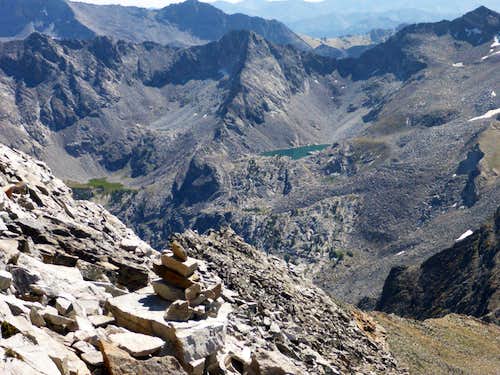 Riding that bit of inspiration, I made the last push to the summit.  I think I could hear the Hoos singing as I reached the peak.  Of all the beautiful views from that perch, perhaps none was more rewarding than that of the dusty olive ammunition can holding the summit log, which I promptly and proudly signed. 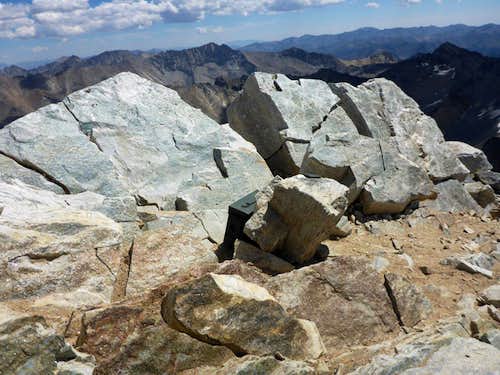 This view wasn't bad either.

Following the obligatory rest, gawk, and documentation, it was time to descend.  No doubt about it this time, I was going straight down to the saddle valley.  Halfway down I saw a couple ascending towards me.  These were the first humans I had seen since Mangled Thumb Guy.  Also likely a husband and wife team.  This fit-looking pair was motoring straight up from the saddle valley, somewhere in between where Mangled Thumb Guy and I chose to turn to the summit.  When close enough, the guy and I paused to chat.  Turns out the guy is both expert and helpful about Hyndman. I described my circuitous route, and the Helpful Expert promptly told me I went the wrong way, even though “the books” talk about that route.  Best to just go straight up “the draw” to the top, he explained.  The Helpful Expert then asked me why I had “my sticks” out.  I explained that I just took my trekking poles out for the scree descent, but explained I had packed them away for everything up to that point.  He repeated that I didn’t need them yet.

Then he pointed at my daypack and asked me if I had “everything and the kitchen sink” with me.  (He and his wife travelled with no “sticks” and only a fanny pack holding a couple of liters of water.) I explained that I was training for a Kilimanjaro climb in September, and was packing the gear I would likely have in my daypack with me in order to test it out.  In case I hadn’t done any research before booking my trip, the Helpful Expert informed me that Kilimanjaro was a long trek, but that there’s no technical climbing involved.

Somehow the topic of Borah came up, which I had climbed a couple of weeks before.  When I mentioned the challenges of Chicken-Out Ridge, he repeated the same tallish tale I had read on some blogs before climbing Borah:  “We hiked and hiked, and at some point we asked someone where Chicken-Out Ridge was, and they told us we had just crossed it without even knowing it!” (Read my Borah trip report if you’re not sure how that comment resonated.  Also, because I’m petty like that, I’ll point out that the Helpful Expert didn’t do COR, but did only the “go around” route to the left.) At that point, his wife caught up and power-scrambled by.  A moment later, our conversation was punctured by a loud crash, as she picked the wrong rock for a foothold and sent a 100+ lb. boulder tumbling down the mountain – something that is frighteningly easy to do on this scramble.  Probably by design, the Helpful Expert was climbing on a different, parallel line from his wife – and, by luck and not design, I was well to the south – so no damage except to the psyche.  I joked that I had a spork with me in case my leg got trapped under a rock and I needed to cut free.  (And, no, if I had the kitchen sink with me, I didn’t really have a spork!)

Quick word of advice about rock-fall on Hyndman:  Trekking up Hyndman solo probably isn’t a great idea, because you could fairly easily twist an ankle or break a leg.  But at least you don’t have to worry about a partner’s rock-fall.  Best bet is to take the implicit advice I got from the Helpful Expert:  go with a partner and stay out of each other’s fall line at all times.

After saying goodbye to Mr. and Mrs. Helpful Expert (who, joking aside, were both very nice and, yes, helpful), I headed straight down “the draw” to the saddle valley.  Once into the valley, the bouldering still does not yet end, but demands another 30 minutes or so before you can finally get the hell off of these damn rocks!  Back on glorious dirt trail, you’ve got maybe 5 miles between you and a soak in the cold creek by the trailhead.  Wahoo-Booray!

Here's a picture that might help you find "the draw". 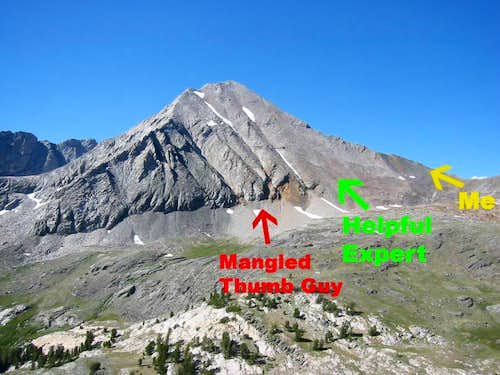 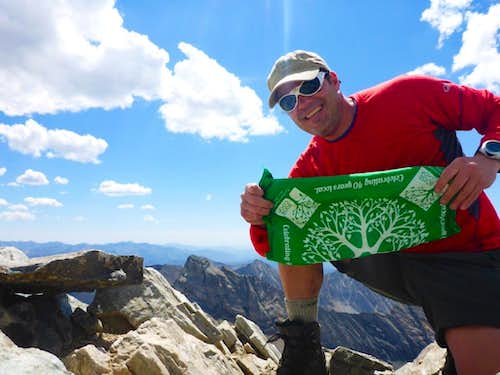