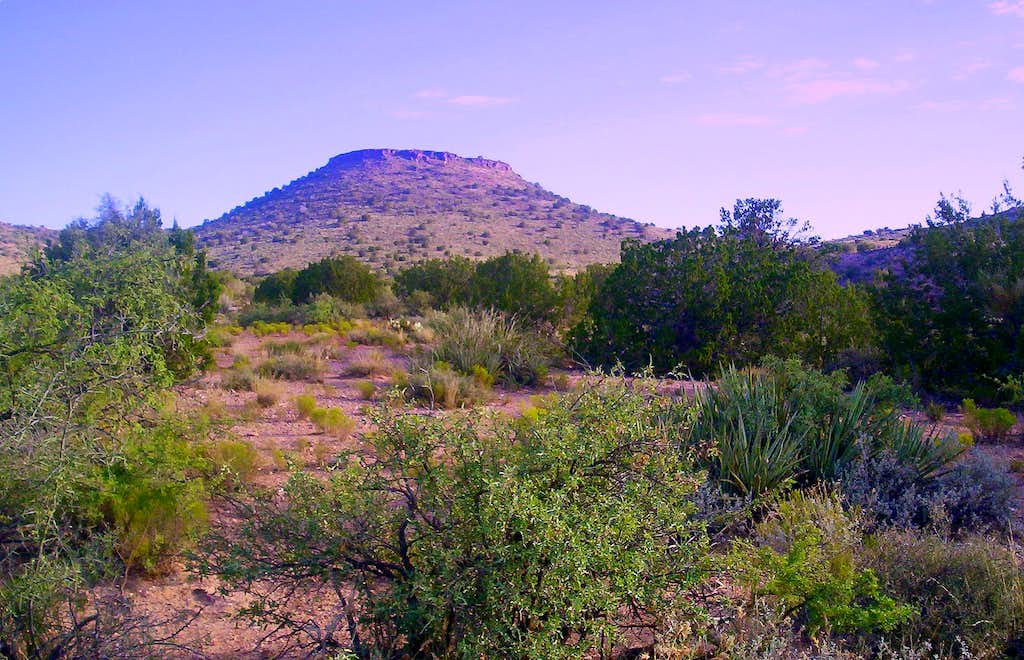 Red sky in the morning - Climber, take warning! Red sky at night - Climber's Delight!! House Mountain, as seen at daybreak, lies in the Coconino National Forest between the Village of Oak Creek and Cornville, Arizona. House Mountain Shield Volcano outside the Village of Oak Creek first erupted 14.5 million years ago, just under what was then the original edge of the Mogollon Rim. One of five active volcanoes in the Verde Valley, the House Mountain lava flows were deflected by the the imposing Mogollon Rim, covering the Verde Valley many meters deep in lava. The Verde Fault was more active then, and over 6,000' of rock was down- dropped to create the Verde Valley. Continued subsistence eventually caused the Verde River to stop flowing, forming the ancient Verde Lakes. Two million years ago, the valley was filled with sediments which completely covered House Mountain Volcano. The Verde River and Oak Creek flowed over the sediments, swiftly cutting into them. The top fifty feet or so of the mesa known as Tabletop Mesa, site of the Sedona Airport, was deposited by Oak Creek!! As these erosional forces continue over the NEXT million years, the Mogollon Rim will eventually MEET with the Grand Canyon, creating a SUPER GRAND CANYON covering most of northern and central Arizona. [Photo taken north of central AZ's (Beaverhead-Cornville Road), which is the only approach to this dormant volcano. Please prepare for Catclaw, various types of cactus and shin-dagger Agave plants. Rattlers in season!!] August 16, 2008
« PREV NEXT »

I don't get it

Is this the volcano you spoke of? Didn't you say it got buried?

During that time, sedimentation, uplifting,
and massive erosion have LEFT the volcano
in the form that you see here today.

It's really not KNOWN (by most) as being a
volcano, though it rises near a major
highway between the Village of Oak Creek
and Interstate 17.

I wonder what other gems are in these photos of yours. At any rate if you don't mind I will add this to my 'Pageless volcanoes' album because it is so great.

Re: I love massive erosion!

I really don't mind at all. That photo has
just found a good HOME with other volcanoes,
which are probably more famous and higher in
status and elevation than Arizona's volcanoes.