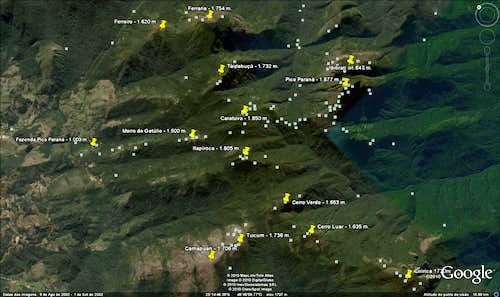 Serra do Ibitiraquire is a mountain range just outside of Curitiba city, Paraná. It's part of a much bigger chain of mountains called Serra do Mar (Sea Sierra). The Serra do Mar is a great mountain range which runs along the brazilian coast for about 1500kms, from Espirito Santo state to the South of Santa Catarina. In Paraná the Serra do Mar is not only a step between the coast and the first plateau of the interior, but also a typical marginal mountain that rises from 500 to 1000 m on the average level of the plateau. It is divided into several blocks by massive ups and downs, which have regional names just like Ibitiraquire. The highest altitudes of the Sierra in the south region are in Ibitiraquire. There, the highest summits are named "Giants of Ibitiraquire".

The Serra do Mar has been placed under public protection in 1952. The act felt that this forest is vital to the city of Curitiba and metropolitan region, who can not live without water from the Serra do Mar. Similarly, conservation is absolutely necessary for the bays of Paranaguá and Guaratuba, which suffer rapid siltation process. Its surface covers part of the cities of Campina Grande do Sul, Antonina, Morriston, Pinhais, Piraquara, Quatro Barras and a total of 66,732.99 acreage.

The totality of the Serra do Mar in Parana is covered by formations of Rain Forest classified as lowland (50-50 masl), Rain Forest Sub-Montana (50 to 500 m), Forest Dense Rain Montana (500-1200 m) and Rain Forest upper montane (1200 to 1400 m). Above 1400 m, the ridge of the mountains, there are the ecological sanctuaries. These altitudes have been established for locations between 24°S and 32°W in the Project Radam Brazil.

Rain Forest in upper montane soils have become more shallow and eroded, precluding the development of lush trees Montana. These altitudes, on soils favored locally, there is the advancement of species characteristic of the formation Montana, but showing reduced development.
Under these conditions we observe the guaraperê or guaperê, or the yellow-ipe ipe-colored mountain oak, carob, the Cuvat the miguel-painted and-meat-beef, among others. The upper limits are clear, reaching altitudes up to 1400-1500 m, where the mien of montane grasslands determines the contact Rain Forest High Montana/ Ecological Refuge.

Main photo page: The Paraná Peak Group, The fantastic landscape of the most beautiful mountain there!

Take BR-116 to North till Campina Grande Do Sul, and search for Posto do Tio Doca (Tio Doca Gas Station). Ask for directions to get to the Pico Paraná Farm. From that farm is the starting point to the trail to some mountains of Ibitiraquire range. The trailhead is behind of a sign that says “Pico Paraná” with some geological info and maps on it. There is some bifurcations and you must chose which one to go depending on the mountain you wanna go, you're goona pass thru crests and valleys and a lot of tree roots. Be ready to get tired!

From that point you can do all those summits but normaly, people use Pico Paraná Farm to summit the mountains: Pico Paraná, Camelos, Ibitirati, caratuva, Itapiroca, Taipabuçú and Ferraria.
You must pay R$ 10,00 to the property owner, Dilson.

Another way is to go to Bolinha farm, a few kms down the same road, about 10 kms. From there the mountains you can reach are: Camapuan, Tucum, Cerro
Verde, Pico Luar, Ciririca and Agudos de Cotia.
You must pay R$ 3,00 to the property owner.

No fees at all despite the fact it is a national park.

The Serra do Mar is an important local biome, where the highest rate of resident species in the state. Even considering the lack of relevant data, diverse topography, soils, vegetation and also the high percentage of original vegetation cover, leave no doubt that the native fauna is still present, it is highly rich and diverse. There are also rare species whose population densities are low, either by natural causes or by human action. Many of these species, or because they become more vulnerable, are now threatened with extinction, appear as such in official listings as RED DATA BOOK, CITES IBAMA. Our mountains are the refuge of coatis, tayras, ferrets, hedgehogs, cuícas, armadillos, monkeys, and howler and capuchin monkeys, cats like jaguar, puma, ocelot, moorish. It also houses several species of birds such as eagles, parakeets, juriti, tanagers, woodpeckers, macucos, and toucans.
Also a lot of little animals such spiders, insects and snakes (a lot of snakes!). 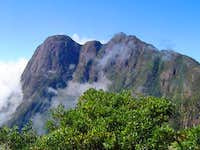 To access the mountain page here at SP: PARANA PEAK 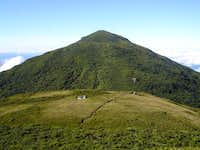 Caratuva from Getúlio Hill.
Caratuva is one of the highest peaks from Paraná state and the whole brazilian south region.

To access the mountain page here at SP: CARATUVA PEAK

Ibitirati as seen from Paraná Peak summit.
Ibitirati is a secondary summit of Paraná Peak group, and third highest summit of Ibitiraquire range, part of the Serra do Mar mountains.

To access the mountain page here at SP: IBITIRATI PEAK

Itapiroca as seen from Getúlio Hill.
Itapiroca is one of the mountains called "giants of Ibitiraquire", since it's the 4th highest peak down there. It is one of the most visited mountains of the Sierra because is quite easy to summit.

To access the mountain page here at SP: ITAPIROCA PEAK

Ferraria as seen from Paraná Peak summit.
Ferraria is a gorgeous and distant mountain at Serra do Ibitiraquire range, in Paraná state, Brazil. Not a very popular mountain outside the state, almost no one goes there.

To access the mountain page here at SP: FERRARIA PEAK

Tucum as seen from Cerro Verde summit.
Tucum is another popular mountain in the Serra do Ibitiraquire range. But is not very easy if you're not used to hike endless rock ramps to reach first Camapuan summit.

To access the mountain page here at SP: TUCUM PEAK

Taipabuçú as seen from Caratuva summit.
Taipabuçú Peak is a 3 summits mountain in the north side of Ibitiraquire range. Not very popular mountain, but often visited by southern mountaineers in the brazilian state of Paraná.

To access the mountain page here at SP: TAIPABUÇÚ PEAK

Ciririca as seen from Tucum summit.
Ciririca is a very popular mountain in the Serra do Ibitiraquire range. But it is popular not meaning "easy mountain", on the contrary. It is normal to hear here at my country: "If the Sierra Fina traverse is the brazilian Everest for a traverse, Ciririca Peak is the Brazilian K2".

To access the mountain page here at SP: CIRIRICA PEAK

Camapuan from Tucum summit.
Camapuan is a very popular mountain in the Serra do Ibitiraquire range. But is not very easy if you're not used to hike endless rock ramps. It's ramp is famous and it has 3 false summits.

To access the mountain page here at SP: CAMAPUAN PEAK

Cerro Verde from Luar Peak summit.
Cerro Verde is one of the mountains called "giants of Ibitiraquire", a selected group of the highest summits of the area. It is one of the hardly visited mountains of the Sierra because is a quite distant walk to its summit, and not so easy.

To access the mountain page here at SP: CERRO VERDE

Luar from Tucum summit area.
Luar Peak is one of the mountains called "giants of Ibitiraquire", a selected group of the highest summits of the area. It is one of the hardly visited mountains of the Sierra because is a quite distant walk to its summit, and not so easy. The hardest job is to overcome three summits before that one.

To access the mountain page here at SP: LUAR PEAK

Camelos with its funny form.
Camelos is NOT one of the mountains called "giants of Ibitiraquire", since it's altitude is quite lower compared to the highest peaks down there. It is one of the almost never visited mountains of the Sierra because it's isolated, far away from the trail to Paraná Peak, and the terrain is too bad to get there and reach the summit.

To access the mountain page here at SP: CAMELOS PEAK

There's several places you can sleep there. Some of them are well defined as campsites, such as Camp 1 for Paraná Peak, Camp 2 for Paraná Peak (stone house), Paraná Peak summit. Other ones you just have to find, here we go:
Pico do Paraná farm;
Morro do Getútlio;
Caratuva summit;
Itapiroca false summit;
Taipabuçu summit (the first one);
Tucum summit;
Camapuan summit;
Cerro Verde summit;
Pico Luar summit;
Ciririca Peak false summit (below the metal plates).

Be my guest, I marked the summits. 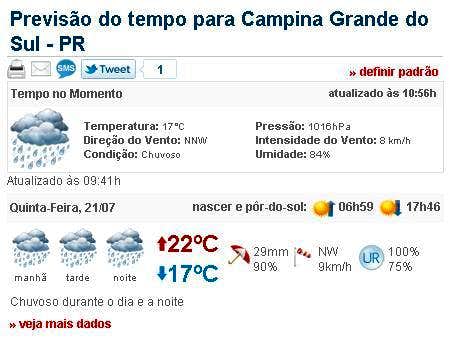