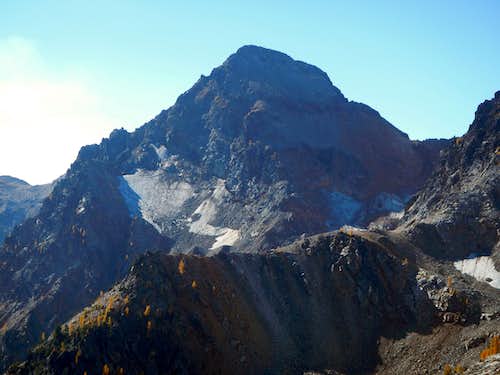 The North Face
Ice Box is the unofficial name for the highest peak on Ice Creek Ridge between Ice Creek and Phelps Creek. Fred Beckey's Cascade Alpine Guide describes Ice Creek Ridge as just over 3 miles long and extending from Pomas Pass at the southeast end to the saddle just south of Mount Maude at the northwest end. 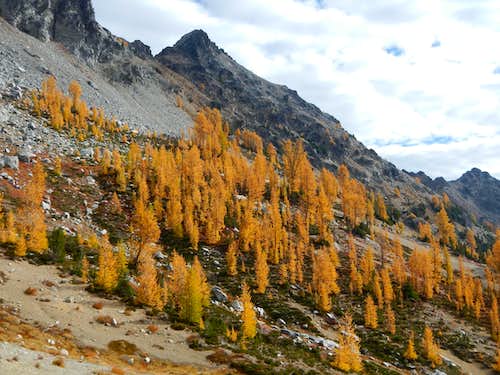 Larches Below The West Face
There are two other unofficially named high points along this ridge, Freezer and Chilly. Ice Box itself has 472 feet of prominence and is the 148th highest peak in Washington State while Chilly is 193rd highest. This cold naming scheme is no doubt linked to the nearby Ice Lakes. 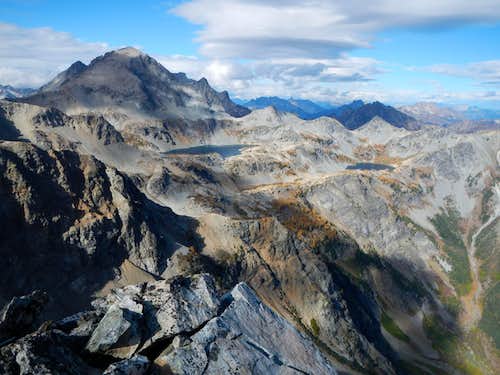 Maude And Ice Lakes Seen From The Summit
The north face of Ice Box is steep and features several quickly receding glacier remnants. The upper east face is a sheer cliff for nearly 2000 feet. Perhaps one of the most unique things about this peak is that several of it's slopes contain sizable tephra deposits displaced by prevailing wind during one of the last great eruptions of Glacier Peak. These deposits are most recognizable in the form of pumice rocks. 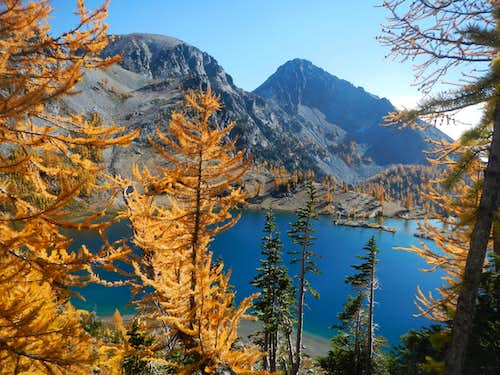 Spectacle Buttes and Lower Ice Lake
Ice Box will not be the only objective for most ascent parties. It is suggested to combine this peak with Freezer, Mount Maude and Seven Fingered Jack or Carne Mountain and Chilly depending on which access route you choose. For the full meal deal, consider making a loop and take several days and nights. 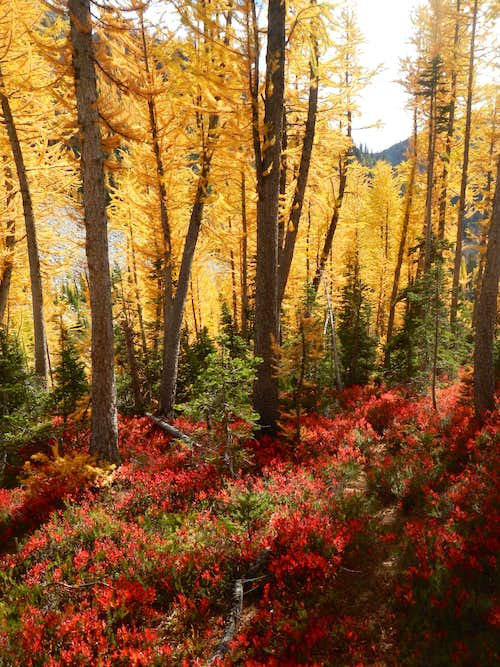 Gold and Red
Numerous larches along Ice Creek Ridge turn golden in late September or early October. This is the ideal time to visit the area but it might also be the most crowded time, especially on the weekend.

Hike 3.5 miles on the Phelps Creek trail and cross Leroy Creek. Turn right at the junction next to the creek and follow the trail up 2000 feet to Leroy Basin. Pass several nice camping spots and take care to stay on the main path as it ascends to the upper edge of the basin before turning southeast. Follow the trail to Box Creek Meadows. It will cross one major washout gully. Follow cairns up on the far side. 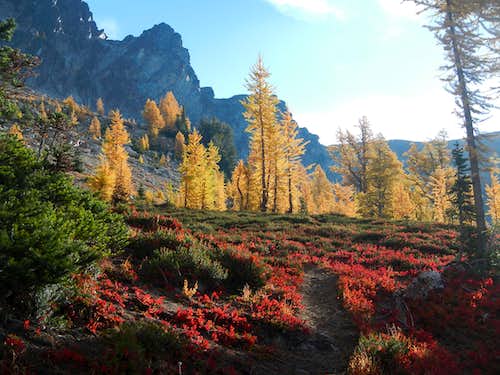 300 yards from the trailhead, turn right at a signed junction and ascend 2950 feet to a junction below the south peak of Carne Mountain. Turn left and cross over the saddle between the two peaks of Carne Mountain. On the east side the trail descends several hundred feet to the Rock Creek trail junction. Keep left and continue to Box Creek Meadows. 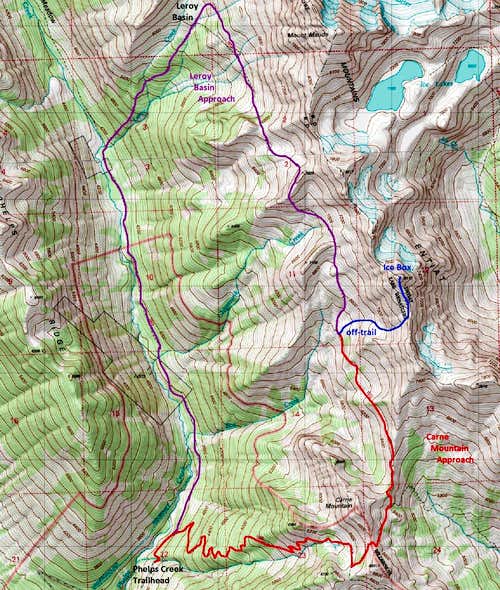 This is a class 2 route. If you have to go above that, you are off-route. Whether you are coming from Leroy Creek or Carne Mountain, the west slope route will be the same. Keep in mind while approaching this peak that the Carne High Route trail which connects Leroy Basin and Carne Mountain is not maintained and troublesome to follow in a few spots. The goal is to get to elevation 6440 feet in the Box Creek Meadows and then ascend directly east following a small creek drainage up as it curves southeast to enter a small basin at 6900 feet. 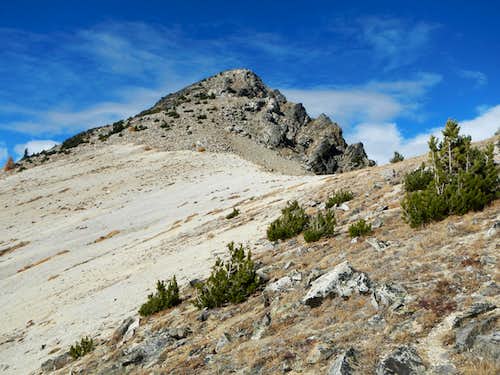 The South Ridge and Pumice Saddle
This basin is filled with boulders and talus. From the basin ascend a shallow gully and/or easy slopes northwesterly to gain the crest of Ice Creek Ridge at 7610 feet. You will come to the pumice saddle south of the peak. Ascend the south ridge to the summit. No register was present in October 2015, so bring one up there! 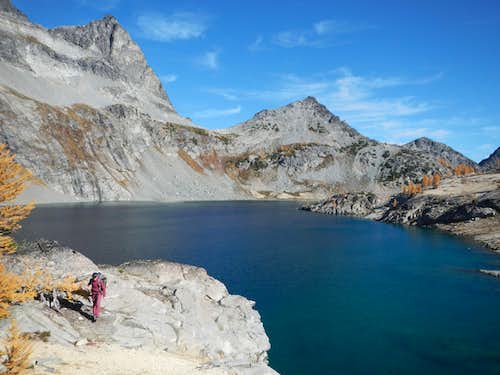 Upper Ice Lake
Then turn left onto Chiwawa River Road and follow it for 22 miles. It will become a rough dirt road. Turn right onto Phelps Creek Trailhead Road and continue 2.3 miles to the end of the road. The last 2 miles of this road are very rough and should not be attempted without 4 wheel drive and high clearance. Subaru's are good enough.

Northwest Forest Pass to park at the trailhead.

The Phelps Creek TH does not have most of the required amenities to be considered an "established trailhead" therefore a NW forest Pass is not required. Also, as far as I can tell, the supreme court ruling from 2013 or so still might apply, in which case a NW forest pass is illegal and not needed anywhere, despite what the FS says since they just try to fool everyone into thinking it's required. However the laws may have changed again making them required at established trailheads, however trailheads without a specific list of things (which includes a toilet, horse tie up, information sign, picnic table, and sufficient parking), I know for a fact don't require a forest pass. BTW, amazing fall color photos! I will have to go up there in early october!!

Re: NW forest pass not required

I appreciate your take on this matter. For the record, I have never purchased a trailhead pass of any kind, nor will I ever do so. Parking tickets issued by the forest service are great for blowing your nose with, or cleaning up after going to the toilet.