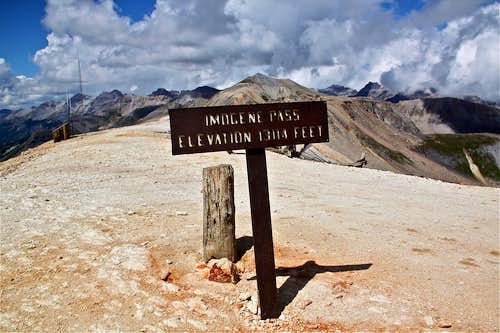 
First, this is actually a popular technical 4WD route connecting two beautiful mountain towns: Ouray and Telluride. I am describing it as a route because it is also a place where a yearly Imogene Pass Run takes place. I have run this trail/rough dirt road several times, and hiked it to reach some of the thirteeners in the area.

An annual run race is held over the pass between Ouray and Telluride on the first Saturday following Labor Day. The grueling race starts at 7800 feet in Ouray, and is 17.9 miles long. It is very popular and you have to sign up early (see link to the website above).

I ran it and I hiked it, but never drove it (no desire), and typically at the higher parts of the road, I tend to move faster on foot compared to slowly moving vehicles crawling over boulders. The road provides access to several 13,000 foot mountains in the area, and is very scenic.

The race started in 1974 with six runners, and the event became so popular that now only pre-registered runners get an entry. You can sign up on the website listed below sometimes in May.
The race always takes place 2nd weekend in September, and I remember race officials changing its course due to poor weather conditions in the past. We were lucky with a good weather this year. The first 10 miles climb up, starting at 7,800 feet and reaching the top of Imogene pass at 13,114 feet. Descent to Telluride drops to 8,800 feet over 7 miles. The scenery is amazing, and keeps runners coming back.
And runners get a discount at Ouray hot springs. What a way to recover from the hard run!


Some Images from the race

The Imogene Pass road was built in 1880 for access to Ouray from Tomboy Mine. It was named for Imogene Richardson, the wife of one of the Thomas Walsh's partners in the Camp Bird Mine. Wires carrying the first commercial transmission of alternating current electricity were strung across this pass in the 1890s.
The Tomboy Mine was situated high above Telluride. For several years there was little activity at Tomboy because it was difficult to reach. However, after the silver crash in 1893, prospectors struck gold at the Tomboy, and the mine began to produce handsomely. At its peak, the mining camp supported about 900 people.
In 1901, the Western Federation of Miners called their first strike in the Telluride area. This strike was successful, and non-union laborers were chased out of Tomboy over Imogene Pass. In 1903, the Tomboy Mill again began to use non-union labor, and a second strike was called. The mine owners asked Governor James Peabody to call up the state militia, and the governor in turn, called on President Theodore Roosevelt to send federal troops. With the area under military rule, the union and the strike were broken. The union labor was run out of town but set up camp at Red Mountain and plotted to recapture Tomboy and Telluride. Fort Peabody was constructed at the top of the pass in 1903 to protect against such attacks. The attack never occurred.
The route was reopened as a 4WD road in 1966, following the efforts of various 4WD clubs.

You can start either in Ouray or Telluride (the running race always starts in Ouray and finishes in Telluride). I will write the description starting from Ouray.
Drive on Ouray Main Street = U.S. 550 road south, and turn just past the first switchback on the well signed Imogene Pass/Camp Bird Road (# 361). This road goes through the Ice Park. It is a well maintained dirt road, snow plowed in the winter for the first 4.5 miles to the Senator Gulch area. If you decide to explore Imogene Pass in the winter, check for avalanche conditions.
Continue on the good dirt road until a well marked turn-off for Imogene Pass. Follow this route as it climbs pass Camp Bird and Richmond Basin. Higher up there are some trail short cuts, which runners take during the race.
The top of the pass offers spectacular views, and it is only a short hike to the summit of Telluride Peak (?15-20 min). The descent from the top of Imogene Pass is again easy to follow - the only dirt road dropping towards Tomboy. When you will be approaching Telluride, you will start to see a lot of hiking trails leading off this rough road. The views of town are spectacular. I have descended this only during the race, and love to hear the music, admiring screams of spectators, and see the town getting closer and closer.