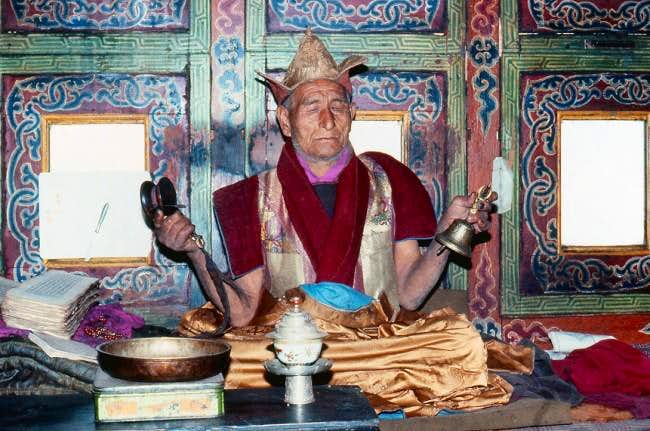 In 1982 I did the complete trek from Jiri (SP) to Everest base camp. On the way we passed a Monastery at one of the high passes before we reached Lukla. It was raining, snowing, hailing ect. as I passed and a monk motioned me inside with a wave of his hand. I stayed for a few hours sharing tea with this monk who spoke little or no English. Before I left to join up with my friends on the trail I gave a donation and offered to take his photo and send it to him. He proceeded to get completely dressed up in this wonderful costume and posed for a few shots. I sent them to him at the address he provided and I hope he received them. This is a trek I would recommend to anyone who wants to venture to the Khumbu. It gives you two weeks of acclimatization before getting to the "Big Ones" and can provide many adventures along the way. October, 1982. Kodak Ectachrome 200. Pentax Spotmatic F. William Marler
« PREV NEXT »

...great colors! My goal is to make it there some time in the future, can't wait. I just don't know how many gigabytes in memory cards would be enough?! It is photo eldorado.

Re: Beautiful portrait with...

I believe I took 16 rolls of film (36 exposures) and used them all. So I would go for the larger card. Or several 256 cards incase one crashes. I’ve been invited on a garbage cleanup of Everest expedition next year and if the sponsorship goes well I will be back in the Khumbu after an absence of hmmmm... 1986-2004... 18 years. I cannot believe time has passed so quickly. I would like to retrace my steps and see how much has changed and if my photos arrived. Thanks for the comments. Cheers William

Re: Beautiful portrait with...

Thanks William for the reply, I wanted to ask you how many rolls you used but forgot. Currently I have around gigabyte in cards but my problem is that on great day I can fire up to 700 shots (700mb) on Velebit! If trip is longer I restrict myself so during this summer 7 days long alpine trip I used all the memory I had. This makes me wonder how I could restrict myself during month long Himalaya adventure. 3-4 GB is least I need :-) just my thoughts. I hope expedition will get sponsorship and that you'll be there again after all the years. Cheers, Aleksandar