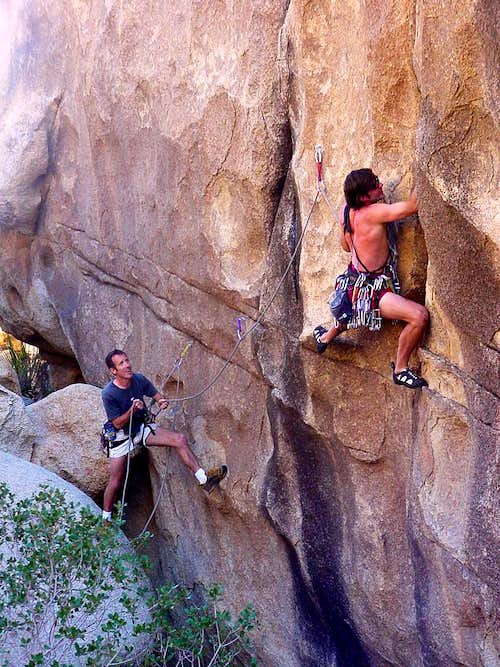 In this photo, taken in 2003 by Andrew Burch, the late, great Vern Stiefel is climbing The Last of The Gohegans. This is almost certainly the 2nd lead of this route, 11 years after the first. Mike Morley is belaying.

Indian Country is a "secret" crag hidden away in the rugged, confusing and convoluted terrain to the north of the main wash of Rattlesnake Canyon. It is as "back country" as you can get in Joshua Tree, and you can expect seclusion and privacy, as well as a fine adventure just getting there. The main cliff is north facing and cool, so spring and fall are nice. The rock is mostly quite good, being covered with a fine brown patina.

Indian Country is located in the Rattlesnake Canyon area and is best approached from Indian Cove. Your hike / scramble will begin at the trail head for Rattlesnake Canyon. There are two suitable routes. The shortest, in red on the topo, takes a steep rugged line up a boulder covered hillside behind the "Corral Wall". This wall can be found easily by referring to any of the current complete Josh guides. The Corral Wall faces south. As you walk along its base heading west, you will see a canyon heading south, to your left. As you can see on the map this canyon goes all the way up through and connects with the main Rattlesnake Canyon. To get to Indian Country you want to head south into this canyon for about 200 yards and then turn west into a side canyon filled with boulders which gains elevation steeply up to some crags up high. The gray and brown patina face of Upper Dodge City will be visible on the left side, and you will see a "pass" above, to its right. Indian Country is the north side of the crag to the right of the pass. Going straight through the pass takes you to Cactus City. For the first 2/3 of the way up I prefer to keep to the left side of the canyon as reasonable, but the upper part is better up on the right. From the Corral wall an athletic hour should get you there. The alternate route, in yellow on the topo, cruises up easier terrain staying in Rattlesnake canyon until you cut back south into Cactus City and around to the backside of the crag to find Indian Country. Low in Rattlesnake Canyon, shortly after passing the turn off for the Corral Wall you will come to some gray slabs. Staying to the right will avoid the big obstacles. The turn off to Cactus City is the second major break in the right side of Rattlesnake Canyon, the first being the aforementioned canyon which comes up from the Corral Wall. Both routes are nice, and I have enjoyed taking the steep way in and the longer way around out. 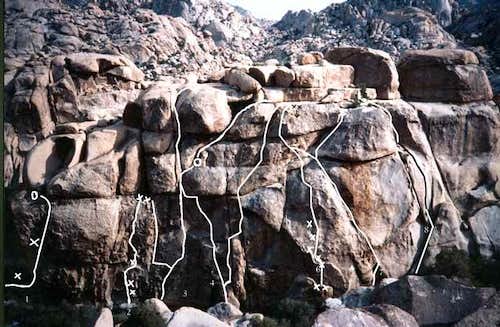 The routes in Indian Country are, with one notable exception (Granite Dance,) found on the north side of the crag. From left to right as numbered in the photo they are: 1. The Last of the Gohegans. 5.11d. FA Kris Solem & Ken Gohegan 1992 2. A Good Day To Die. 5.11bR (the R is 5.9.) FA Kris Solem & Guy Keesee. 1992 3. Left: Squaws in Heat. 5.9. FA Vernon Steifel, Bob Passerini, K Solem 2003 3. Right: Welcome to Indian Country. 5.9 FA K Solem & Jan McCollum 1992 4. Trail of Tears. 5.11aR. FA Kris Solem & Jan McCollum 1992 5. The Little Big Man. 5.8. FA Jan & Rachel McCollum. 1992 6. The Little Big Horn. 5.12a. FA Herb Laeger & Kris Solem 1992 7. Flaming Arrow. 5.8. FA Vernon Steifel & Bob Passerini. 2003 8. Tribal Gambling. 5.10d. FA Andrew Burch & Dave Evans. 2003 Standing with your back to this face and looking across high on the other side, a bit to the west you will see a large visor like roof with a splitter crack. This is "Granite Dance", 5.11, FA Tom Murphy and Andrew Burch, 2003. The roof is 3 body lengths. Burly. Descent: There is a bolted rappel anchor on a centrally located ledge at the top of the cliff. Two 50m ropes will reach. There is a bolted rappel anchor at the ledge where "Good Day To Die" and "Squaws in Heat" finish. A single 50m rope will reach. There are slings to rap off from the top of "Last of the Gohegans". These could need renewing. Miscellaneous: Those who explore further west in the canyon will find more climbs on the north facing wall. Herb and Kris did 2 5.10's, one with bolts and one up a crack with a fixed pin up high, which end at the same anchor on a ledge. There is also an unfinished project where Solem climbed a flake to a featureless face and placed a bolt. Obviously the crux lies above...

Take a standard rack for Joshua Tree climbing. A set of TCU's and cams through 4". A set of nuts, some small wired stoppers, and the usual runners and quick draws. Be prepared to renew the webbing at the rappel anchors. This place doesn't get much traffic. Two ropes are needed for the long rappel from the upper anchor.

Guy Keesee and Kris Solem were wandering around this area in 1991 looking for new route prospects. They found and climbed "the Hoosegow" in Upper Dodge City. Then they headed up to explore Cactus City, a large south facing slab reminiscent of the well known Saddle Rocks in the upper park. Guy started poking around the back side of this formation and was thrilled to find this steep brown cliff with many good looking natural lines. In the spring of '92, Guy and Kris as well as Herb Laeger, Jan and Rachel McCollum, and local Veterinarian Ken Gohegan climbed many routes. Some highlights are Guy Keesee's bold runout lead on "A Good Day To Die", and Herb and Kris's very tricky and hard "Little Big Horn." Activity ceased in the area until Verne Stiefel pried the info out of Kris and they, along with Bob Passerini returned in the fall of 2003. Also, joining them to do new routes were Joshua Tree veteran Dave Evans (FA of Swept Away and too many others to mention) and young strong climbers Andrew Burch, Mike Morely and Tom Murphy.