As of October 2017, the Entire Indian Heaven Wilderness is closed due to the East Crater Fire. See here This will likely change later this Fall but it will likely be a sad sight when we can get in there again. 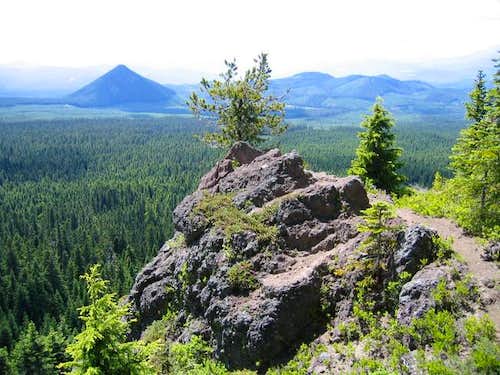 Located in southwestern Washington between Mts. Adams and St. Helens, and situated in the Gifford Pinchot National Forest is the Indian Heaven Wilderness. This was designated a Wilderness Area by Congress in 1984 and now encompasses about 20,960 acres. Originally known to natives as "Sahalee Tyee," for the most part it is a forested plateau with an average elevation around 4500 feet. Among it are volcanic peaks that once burped up lava all over this area. The dominant species of tree is fir as one would expect in this area of the country but within the Wilderness lie about 175 small lakes, ponds and marshes. It makes for beautiful scenery but beware of the swarms of mosquitos in Spring and early Summer.

Lemei Rock is the highest peak in the Wilderness at 5926 feet. Other SP submissions in this area are Bird Mountain, Sawtooth Mountain, Gifford Peak and Lone Butte.

Various native tribes used the area for berry picking, fishing and hunting. In fact, some fields and areas are only open to Native Americans for berry picking so please obey the boundaries and regulations. There is a 2000 foot long field called the Indian Racetrack that was used for horseracing by natives who needed a break from the harvesting. 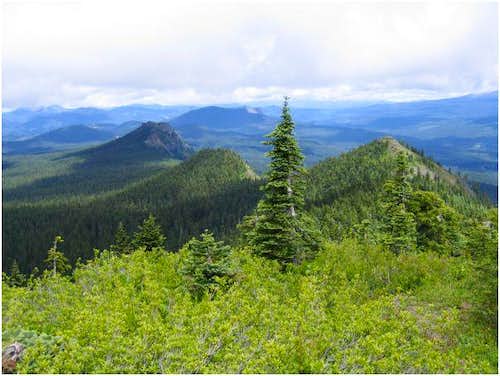 Most access this area from the south and Highway 14 that runs along the north shore of the Columbia River. To access the west side of the Wilderness, take Road 30/Wind River Road north from Carson, WA (signed from Highway 14). Take this road north through Stabler, WA and you can do one of two things: 1-take Road 30 all the way to Lone Butte Snopark (trailhead for Lone Butte-actually Road 30 then becomes gravel and can be taken to Road 24 which goes north around Sawtooth Mountain) or 2- just north of Stabler, take a right on Road 60/Carson-Guler Road. Further on Road 60 you can take a left on Road 65 to go to Falls Creek Horse Camp. Road 65 cuts north and runs basically parallel to Road 30 but goes right up into the Wilderness. If you had continued on Road 60, it travels east along the southern border of the Wilderness and eventually connects up with Road 141 and Trout Lake, WA.

To access The Indian Heaven Wilderness on the east side, you would go north on Highway 141 from White Salmon/Underwood, WA. Again this is signed off Highway 14. You would go north to Trout Lake, continue on Highway 141 turning west to where it becomes the aforementioned Road 60. Go past the Ice Cave and you can access the southern end of the wilderness as mentioned above. You could also split from Highway 141 just west of Trout Lake and go onto Road 88 which goes roughly northeast to the northern end of the Wilderness. To go around the northern border of the Wilderness, make sure you fork left onto Road 8851 at that junction.

There is a plethora of forest roads that run along the eastern border of the wilderness that provide access to areas such as Lemei Rock and Bird Mountain. Go to those individual pages for details but from either Road 60 or 88 mentioned previously, Roads 24, 6020, 6030 6035 and 6040 can be accessed from the south running north and Roads 8821 and 8831 can be accessed from the north running south (and they all meet up with each other).

This map shows the configuration of some of the main roads.

Click this link to check on specific road conditions.

Here is another map, specifically of the Lone Butte Snopark.

Different trailheads require (or don't require) different permits. The PCT does not require any permit or fee. Cultis Creek Campground requires a Northwest Forest Pass. Winter snow parks require the Sno-Park Permit. See those links as well as this one to determine if and what you will need.

And always be on the lookout for THIS GUY

Click on this link to see campsites available in the Indian Heaven Wilderness.

Due to the higher elevations of the plateau, snow often does not melt out until mid-July. Roads may be blocked until that time. See the ROADS section above. 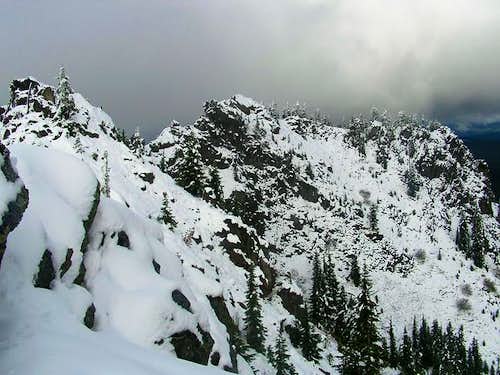 Summer and Fall are the best times to enjoy this area. Early Summer (and Spring if you can get in there) is plagued by swarms of insects. I made it to the trailhead (barely) on Sawtooth Mountain in late October one year and that was probably one of the last days of the year it could be accessed.