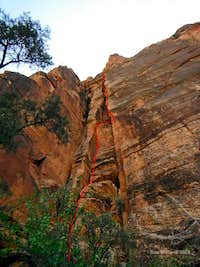 InI is typical of many of the Tunnel Wall routes at Zion National Park in that it offers up one really stunning pitch for the grade. Bryan Bird and Jared Greer established InI in 2000. A good route to combine it with is UnU (5.10), established three years later by Bryan. They line up side by side just beyond (east) the second tunnel window. Both are located just to the right (west) of one of the better routes on the entire wall, Lap Dance, 5.11. 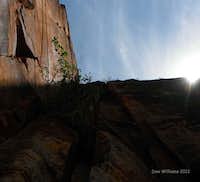 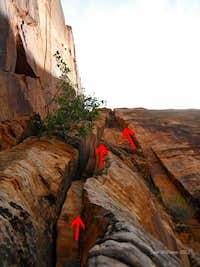 Although laid out as four pitches on Bryan’s topo in his guidebook, Zion Climbing, Free and Clean, InI is best done in two pitches total with 60m or 70m double ropes (proper double rope technique required to avoid rope drag). The first pitch is typical Zion sandstone choss, pulling a loose and sandy roof off the deck. I led this pitch to get the feel of Bryan’s original line, but recommend you give the right facing corner a go just a few meters to the right. This corner actually leads to the rappel tree atop this lower wall. Once you pull the low chossy roof (5.9-10), the climbing is mellow to the top of this lower wall, but full of moss and sand. Once on top of the large bushy ledge above, set up the belay at the base of the hourglass chimney straight ahead, just about a full 200’ of rope out. If combining the rest of the pitches using double ropes, clip one rope up the left side of the first two walls located in the middle of the broad based chimney (which narrows to a stem at the top). The first wall’s left side is approximately 5.7, the second wall’s left side is the crux of the climb on steep hands that slightly overhang toward the top. Then move to the right side of the chimney and start clipping the other rope using wide and narrow cracks until when close to the top of the chimney you can stem or chimney the last few meters to a fixed belay/rap on the left wall.

Take the Zion Park road up towards the tunnel. Park on the right side at a shaded pullout on the 2nd to last switchback (vehicle facing east) or on the side of the unshaded switchback itself. Walk east up to the switchback retaining wall and pick up a trail on the south end of that wall. Follow the trail across a wash and stay with it as it circumvents east around the tunnel wall above about 50yds below it. Just beyond the second tunnel window is a significant buttress (Lap Dance). To the right of this buttress lies an impressive hour glass shaped chimney system (InI). Head up the slope via no specific trail to the base of the lower wall. The original line starts below an obvious chossy roof and follows up the left side of it. An alternative start is just a few meters to the right via a right facing corner.

1st Pitch- 55m- 5.9/ The actual climbing on the first pitch is no more than 100’, but if you drag the rope to the base of the next pitch, you will come close to a full 200’. Start up the right side of a sandy and dirty roof right off the deck. A C4 #4 protects the crux move out of the roof, but steals the bomber hand stack you need to feel all warm and fuzzy inside. I went with the cam placement and did a small but suspect dyno up for a hand jam. This roof kind of sucks and I really recommend going up the corner to the right unless you are like me and need to climb every inch of every route. If you pulled the roof, the rest of the climbing is straight forward and follows a wide crack to the top. The sandstone is loose and covered in moss. Once above on this wall, you can come off belay and just drag (bushwhacking) the ropes over to the base of the hour glass chimney in front of you.

2nd-4th Pitches- 60m- 5.10/ We used double 70’s, but double 60m ropes will allow you to combine these three pitches as well. If you did have to simul-climb a bit, the climbing at both ends of the ropes will be mellow. Start up the left side of the first face stuck between the fat lower portion of the chimney. Climb this wide crack (5.7) to the base of the second face located in between the chimney. This second section involves steep hands that slightly overhang near the top (crux). There is a fixed hex in this section (2012). The best way to avoid rope drag if combining these pitches is to clip one rope on the before mentioned two left side sections. After an awkward mantle out of the hand crack, move right to the left facing corner that makes up the right side of the chimney. Climb multiple cracks, fingers, hands and some wider, up the right side placing gear at will. Eventually you can stem and/or chimney the narrow last several meters to a fixed belay/rappel on the left inner wall. (several topo photos of this long pitch included)

A double 60m rope rap gets you back to the large bushy ledge. Then angle a bit west for a large tree that is fixed (2012) for a single rope rap back to the base.

Double 60m Ropes. Single rack to C4 #5. If you are combining those three pitches like we did, take double from C4 .5 to #3 and triple C4 #2. This is a shaded route, but will get a bit of sun late afternoon. It is not as shaded as Gypsy’s Curse and Feast of Snakes for example. Half shoulder length slings, half draws to extend your gear. Helmets are wise on Tunnel Wall.