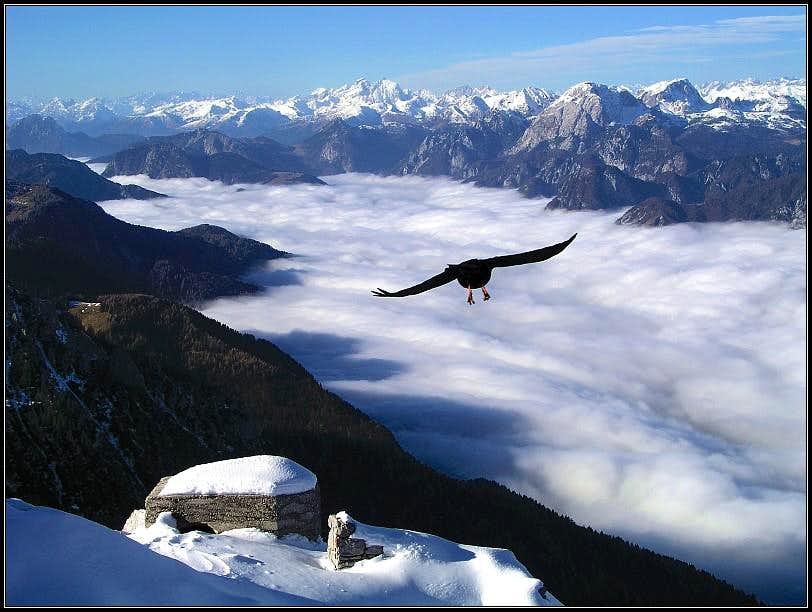 The summit view from Iof de Miezegnot towards the west. Fog covers Val Canale. In the distance main summits of Carnian Alps are seen, among them (in the middle) also Hohe Warte / Monte Coglians. December 6th, 2003.
« PREV NEXT »

After the bombing run

Did it manage to score a direct hit after flying over your head?

Nice shot! Birds can be notoriously difficult to effectively photograph in flight and still get a background scene in.

I was lucky this time. I have so many pictures where birds are not sharp, so I wonder how this one succeeded. And it's even positioned properly.

Sitting on the summit of Croz dell'Altissimo and seeing the daws you wish you could fly!! (September 2003) Submitted by Gangolf Haub on Nov 30, 2003

These Jack Daws must be popular in the Italian Alps.

Gangolf Haub says they soar quite well as you picture shows.

Yes, Gangolf is right. You sometime wish you could fly. Whenever I see these beautiful birds I remember one of Reinhold Stecher's (bishop of Innsbruck) essays, descripting them. They like to play with wind so much!

Yeah, they're quite popular; as long as you don't start to eat! Then they get to be like ground squirrels - always begging!

In addition to Vid's book there is one by the behavioural scientist Konrad Lorenz, in which he describes the daws that had been living under the roof of his house! Very interesting! I looked it up with amazon.com but only found the german version at amazon.de. It's called 'Er redete mit dem Vieh, den Vögeln und den Fischen' freely translated: 'He talked to the cattle, birds and fish'. Whenever you find this one, be sure to get it. Reading the description of a storm going round Lorenz' house and the daws enjoying it makes you imagine you were among them.

The book's as great as Vid's picture!!!!

I'm speechless! Not only you had fantastic day in Italian Julian Alps but you also caught Kavka bird, fantastic shot!!! Bird is simply perfect, its position and position on the photo, sharpness. Even in photo shop it couldn't be done any better.

I like some saturday's shots, so I decided even to post Poldanasnja spica page. Really, this is not a trick. I have one picture from Sis, Cres, where eagles were in the air. But none on the best picture. So I simply copied and pasted two or three from the other picture. But this one is real. I changed almost nothing.

Whole set is great, it was fantastic day. I never doubted this photo wasn't a set up. Title of the comment is joke because it’s perfect. I know how hard it is to catch moment like this with consumer digital camera because of the focus lag. Maybe you should have played lottery that day :-)

Beautiful pic!! What a moment you caught! Like you asked the bird to be there on right places. :)

Thanks, for viewing and voting on so many of my pictures!

Now I want to be the bird and fly above the cloud sea there:)
Great shot!!!
TA

Yes, you know those moments on the summit. Nothing is so special, the mountain is nothing superbe, but the feeling is great :-)

This must be one of the most touching pictures I have seen in a very long time. Makes me want to pack my rucksack and go hiking. Absolutely wonderful.

Thanks, Marcus!
Now it's that time. Inversion, the first snow, clear skies,...

You have done a wonderful job taking advantage of this moment.