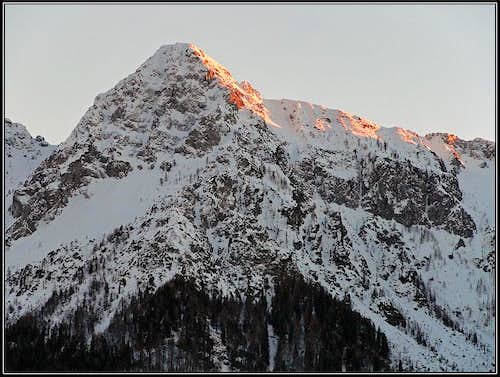 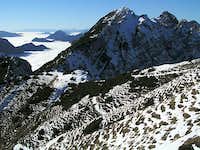 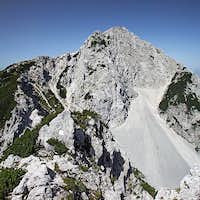 Iof di Miezegnot / Poldnašnja špica (= Noon Peak) is the highest mountain in the 15 kilometers long northern streak of mountains in Western Julian Alps, called Catena di Malborghetto / Naborjetske gore. But its altitude doesn't make it important, nor its primary position in this small subgroup. What is nice about this peak is its excellent panoramic position, combined with the ease of ascent. Its position north of the most impressive part of Western Julian Alps guarantees the best possible view on the huge northern walls of Montaž, Viš / Iof Fuart and other giants, rising more than 1600 meters from Zajzera / Valbruna valley. To all other directions the view is free.

The summit rises out of the mountain ridge for only some 200 meters, suggesting that a mountain tour along the whole chain would be something extraordinary. The southern slopes of the mountain end just on Sella di Somdogna / Rudni vrh pass, 1398 m, where also the road through the Dogna / Dunja valley ends. An easy ascent brings you over these 700 meters in two hours. Towards the north, the slopes are higher. Malborghetto / Naborjet and Ugovizza / Ukve in Val Canale lie on only good 700 meters of altitude. The main ridge towards the west continues on the sharp, three-headed peak of Monte Piper / Piparji. Towards the east the ridge goes over several elevations until it reaches Monte Strechizza / Strešica, a broad, rugged massif just above Valbruna village.

Iof di Miezegnot is easily and frequently ascended. The usual ascent is from the south, the other one comes from the north and a marked path also continues (or arrives) along the main ridge to the summits on the west.

The whole northern range of Western Julian Alps is also well known from the World War I. All kinds of remains can still be seen on the whole streak, where Italians held positions. Austro-Hungarian positions were deep down in Val Canale, but they were holding also the eastern fore-summit of Iof di Miezegnot. It was of a strategic interest, because that enabled them to controll Valbruna valley and Tarvisio itself. Austro-Hungarians also attacked the main summit several times, so on the mountain there were many casualties. Graveyards from the World War I can be seen on many places, for example near Valbruna / Ovčja ves / Wolfsbach village.

Names in this area have different origins. Here are mixed Slovenes and Furlani, and throughout the history Italians came from the south and Germans from the north. General remark: When reading Slovenian words on maps or in books, you will find special characters for ch, sh, and zh. They are written with c, s and z with a caron - little v above them, like č, š and ž.

As already said, from Iof di Miezegnot / Poldnašnja špica, you have a great view towards the south - on the northern walls of Viš and Montaž group. More towards the east are other high summits of Julian Alps. Towards the west you see the sharp peaks of the neighbouring Monte Piper/Piparji. Across Val Canale there are the more humble eastern outposts of Carnic Alps, and west of them the more attractive part of them around Passo Pramollo / Nassfeld Pass / Mokrine. More towards the north you can see other high mountains of Alps, including the glacier covered Hohe Tauern.

Gangolf Haub - from the south

The approach valley to the Western Julian Alps will probably be the highway through Val Canale / Kanalska dolina (Udine - Tarvisio). 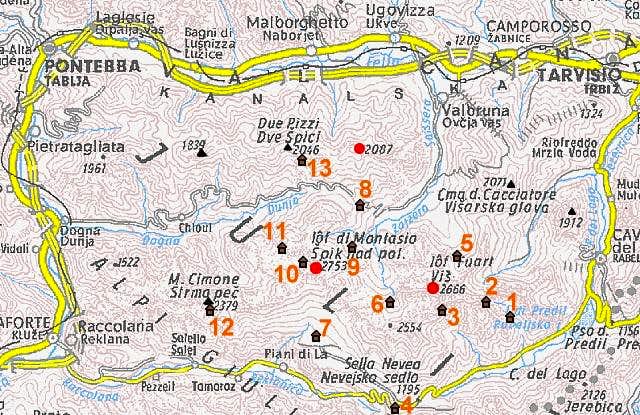 1. For the southern ascent you must deter from the highway in the village named Dogna and travel 18 km through the Dogna valley to Sella di Somdogna / Rudni vrh pass, 1398 m. The other possibility is exiting the highway in Valbruna (5 km west of Tarvisio) and driving south into the Valbruna / Zajzera valley. The road ends on an alpine meadow on the altitude of 1000 m, from where you reach Sella di Somdogna in one hour.

2. For the northern ascents you start in Malborghetto / Naborjet Val Canale or in Valbruna / Ovčja ves / Wolfsbach village. From there two cart-roads reach the alpine meadows on the north. From Malborghetto / Naborjet you hike southwards on Malga Strechizza / Strešica and from Valbruna you hike westwards to Malga Rauna / Ravna. The two meadows are connected by a marked path and from Malga Rauna then the path goes on top. Tarvisio can also be reached from the east, from Slovenia (from the valley of Sava or over the Predel / Predil pass and of course also from the north, from Austria (from Villach or from Gailtal over the Nassfeld Pass). 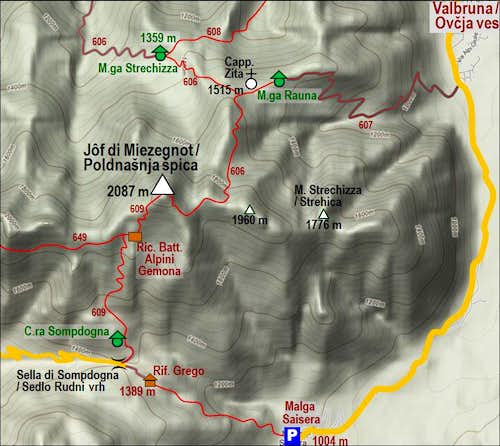 Gangolf Haub - On the northern ascent 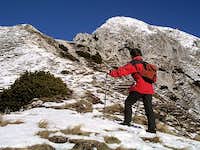 In a few minutes you reach the nearby alpine huts and proceed through the woods towards the north. A well marked path brings you in several curves up to the altitude of 1800 meters where rests of buildings from the World War I are. In one of them a cute bivouac is arranged. Now you are on an open terrain. Proceed over grassy slopes towards the NE, the path leads you into rocky south slope of the summit and in some 15 minutes you reach the summit. 2 hours from the pass. Easy hike, only on a few places when summit rocks are crumbly, the path requires some care.

Either from Malborghetto or from Valbruna you follow a forest road or a marked path to Malga Strechizza / Strešica, 1359 m, and Malga Rauna / Ravna, 1500 m. From there proceed towards the south on the main ridge and towards the west to the top. 4-5 hours. 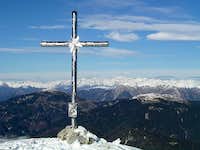 Summit cross and the N view

No limitations or special permits.

Iof di Miezegnot can be climbed in any season. The best months are from June till October, but also in winter, when days are clear. The final ascent over the rocky part is not difficult even in winter, if icy it requires some carefulness. Also the road on Sella di Somdogna is of course not cleaned all the winter. Ski descents are nice from the summit of Iof di Miezegnot. Because the road in Saisera valley is allways cleaned (there are cross-country tracks), people mostly ski down there. Till Sella di Sompdogna you usually go by a cart-road, or through light woods, then over the meadow and finally over steep, open slopes on top. Some also don't ski over the saddle, but directly down in Saisera. 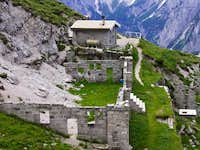 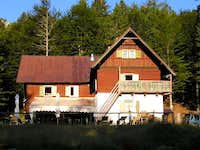 The summit can be climbed in one day.

The other possibility is the bivouac just below the summit. It is apparently new. On december 6th, 2003 it was opened, looking really attractive.

On the main ridge of the northern streak, west of Iof di Miezegnot, some 2 hours away, there is Bivacco Bernardis, 1830 m.