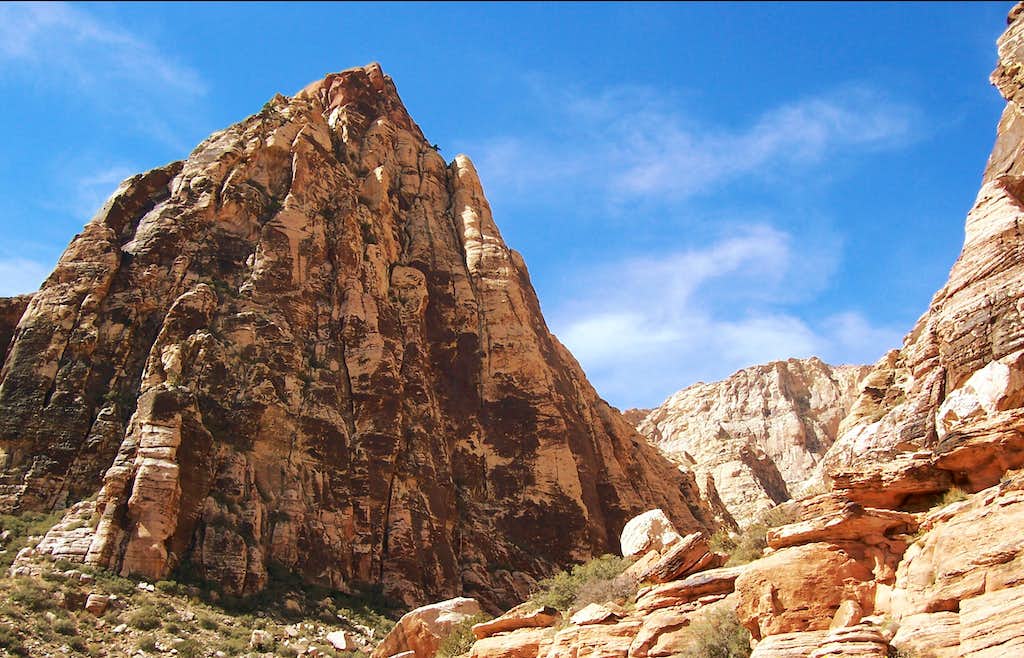 No ,but at least I got your attention! At 5,440' above sea level, the rock pyramid known as Mescalito is the Red Rock Canyon "runt of the Range!" Yes, its hardened formation of Aztec Sandstone is a favorite for rock climbers, but let's take a gander at how it came to past. The most significant geologic feature of Red Rock Canyon is the Keystone Thrust Fault. The Keystone Thrust is part of a large system of thrust faults that extends north into Canada and began to develop approximately 65 million years ago. A thrust fault is a fracture in the earth's crust that's the result of compressional forces that DRIVE one crustal plate over the top of another. This results in the oldest rocks on the bottom of the upper plate resting directly above the youngest rocks of the lower plate. (With all this talk of plates, I'm getting pretty hungry!) At Red Rock Canyon, the gray carbonate rocks of the ancient ocean have been thrust over the tan and red sandstone in one of the most dramatic and easily identified thrust faults to be found. The Keystone Thrust Fault extends from the Cottonwood Fault along State Route 160 north for 13 miles along the crest of the Red Rock escarpment. It then curves east along the base of La Madre Mountain before it is obscured by very complex faulting north of the Calico Hills. HEY, I guess everybody has their faults! My faults are I was born about 50 years too late, and for some reason I always seem to be hungry. Cheers!!! Photo taken on March 10, 2008, at the base of Fern Canyon in Nevada
« PREV NEXT »

Is being hungry a fault? Oh no I'm screwed, everyday is a mistake. Sorry need to go and eat this cream cake. All the best from Caledonia.
Stephen

Yes, I was just making what some Americans call a crude joke. If I was a machine, I wouldn't have to eat! But ... I was put here (on this earth) upon the principal of flesh and blood; I will naturally make mistakes along the way! I wish I had some cream cake with limes. Something green!!! I am wishing you the best, and I will be more careful with my humor. Take care of yourself - hope you have FUN for Saint Andrew's Day!!! :) Larry