I used to be an elevation snob and typically only hiked to peaks that were greater than 10,000 feet.  Then listsofjohn came along and I discovered that lower elevation peaks could be more fun and more challenging because I had to figure out how to get to them.  Most local peaks of significant height have been climbed by thousands of people, routes are well established, and there are guide books to help you find your way.  This is not the case for the smaller, more obscure peaks on which there is no information at all.

Sometimes it's easy, and a quick look at a 7.5 min topo map is enough, but some peaks require more thought.  The aptly named Island Mountain was one such peak.  When I first noticed it on a map, I dismissed it out of hand.  It's located in the southeast corner of Strawberry Reservoir which looked big and deep.

Soon however, the idea of skiing across the frozen lake in the winter popped into my head, but I didn't know if the lake froze solid or not.  It certainly appeared well frozen at a distance from the highway, but was it really?  A friend mentioned that he thought it would be slushy in the afternoons, but that snowmobilers regularly used it.  If it was sturdy enough for them, it was certainly sturdy enough for a skier.  The idea was daunting at first because I imagined it to be a horrid, horrid, many mile slog across a crusty, rutted surface, with gale force winds blowing directly in my face, while enduring snickers from snowmobilers and ice fishermen.  Nevertheless, the novelty was appealing.

The lake abuts US Route 40 so I had seen it several times in the winter.  It appeared desolate with no one around at all.  It wasn't at all obvious that any of the roads were plowed.  The perimeter is huge so one afternoon when I was in the area I scouted out access points.  I discovered that the road on the west side of the reservoir was plowed to the marina, but not to Haws point.  It didn't look plowed when cruising by at 65 MPH because it is not salted so it is snow packed and just looks white like everything else.  I got out of my car at the marina and looked around.  There were lots of snowmobile tracks headed to Haws Point. The disturbing thing was that half way there, there wasn't any snow on them.  They were either ice or slush but it was hard to tell from 1/2 mile away.  Hmmmm.  I certainly wasn't going to come back on a warm day, I'd make sure the snow was fresh, and I'd come midweek to minimize interaction with snowmobilers. 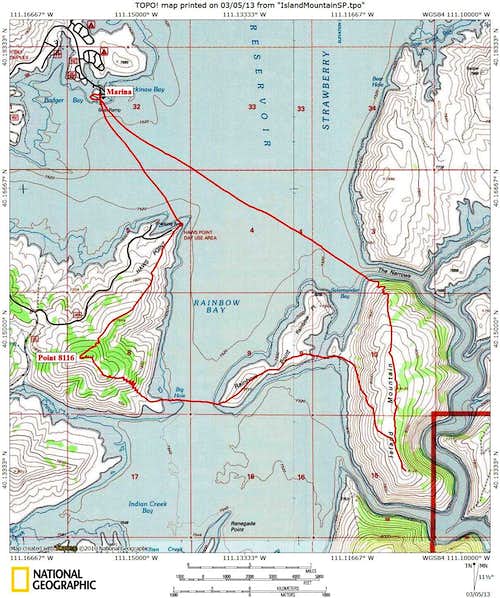 Normally I'm out my door by 6AM but the day of the trip I was dragging my heels and didn't leave until almost nine.  It was going to be cold and I was letting it warm up as much as possible.  You have to pass by Heber to get to Strawberry and from home I could check Heber's temperature.  It was 5F and not moving.  The last time I had done a trip in the vicinity of the reservoir (but not on the lake itself), it had also been 5F in Heber but was -14F at the reservoir about 50' above the lake surface.  The lake was enshrouded in fog and I suspected it was even colder down there.  But today there was no fog and no temperature inversion.  It was 13F when I cruised through Heber and the same at the lake.

I pulled into the parking lot, geared up, and was off.  I skied down the boat ramp and onto the flat surface below.  It was impossible to tell where the land ended and the water began.  As it had recently snowed there weren't many tracks but fortunately some ice fisherman had ridden an ATV to near Haws Point so I skied in their tracks and didn't have to break trail on this first stretch. 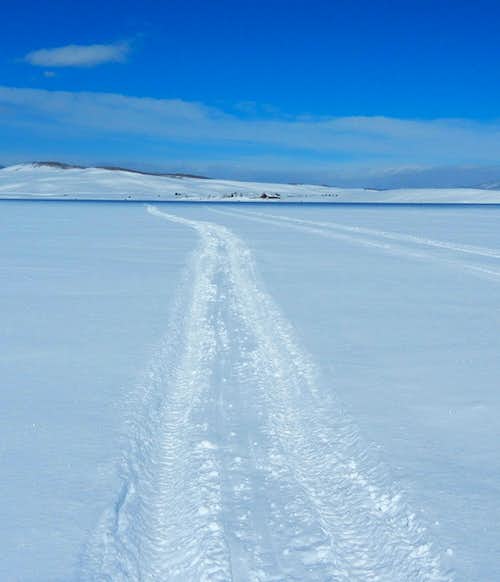 Looking back at the marina

Motorized vehicles were not going to be a problem at all.  Once I left the marina, the place seemed deserted.  Besides the ice fishermen there was only one time that I saw some tiny specks of snowmobilers way way way in the distance.

Uh-oh, I realized I had forgotten my climbing skins.  I knew exactly where they were, right in the middle of a humongous pile of gear I was amassing for a ski backpack the coming weekend.  Crap!  Oh well, I had some time to think about what to do.  I didn't need skins to go up Point 8116 as it was fairly gentle, but although Island Mountain wasn't very high, it had steep sides and skins would sure be nice.  As I skied I did some mental math and realized that at most I'd have to climb up 600 feet and I could side step that if I had to.

Once I got to Haws Point I started climbing to Point 8116.  No snowmobiles had made it over here since the storm so I had to break trail, but it was just an easy few inches of fresh snow.  The terrain starts out devoid of trees and since this was the north side, all of the shrubs were buried too, so things looked stark and barren.  You can see the fishermen if you zoom in on this picture taken as I was heading up. 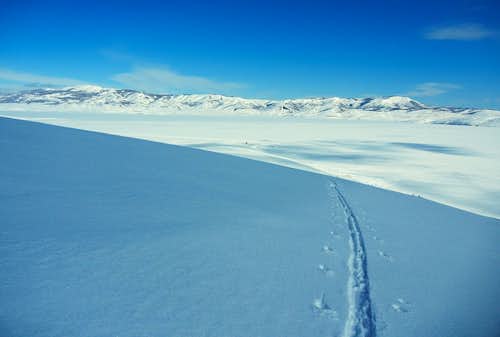 Looking back to Haws Point

At the top of Point 8116 there are trees and it looked just like any other aspen forest in Utah.  I skied down the southeast corner of the peak, threading my way through exposed sage brushes.  I had a great view of Island Mountain as I zigzagged my way down the slope. 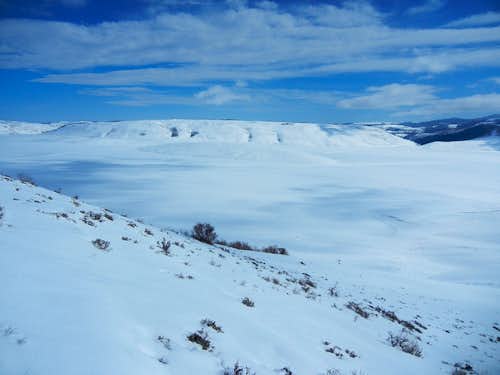 Looking ahead to Island Mountain

The last tenth mile to the shore was very flat so again it was impossible to tell where the shore ended and the lake began.  It was a half mile over to Rainbow Point.  The snow was pristine with no fresh tracks except for mine.  Rainbow Point was bleak indeed.  I don't think there's a single tree on the whole thing, just a few weeds sticking up. 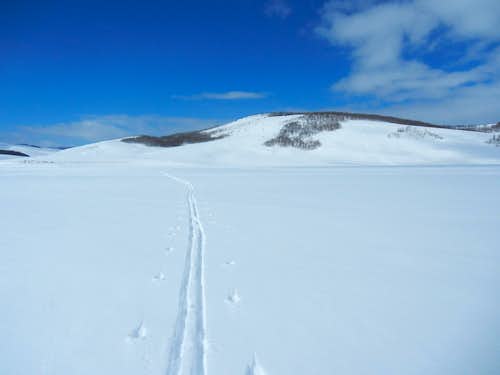 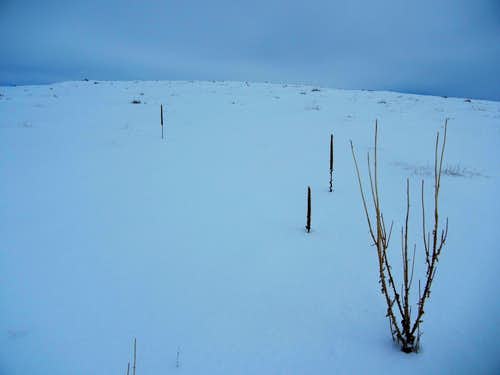 I crossed Rainbow Point and at last I set foot on Island Mountain.  Since I didn't have skins, I did a long sloping traverse up its west side, taking about 45 minutes to get to the top of its long flat ridge.  Once on top, if you didn't know you were on an island, you wouldn't.  I went first to the south tip, and then to the north, guessing that the number of people who had ever skied to the summit was exactly one.  The slope descending to the lake was not the nice powder repository I was hoping for, but it was passable.

Now all that was left was to ski the 2.8 miles back across the lake to the marina which was the teeniest tiniest speck in the distance.  I was hoping to save breaking trail by skiing in snowmobile tracks but there were none.  The weather was deteriorating and the bright blue sky had long since turned to gray.  Skiing on a lake always gives me the creeps and I wasn't happy when I spotted a hole.  On the bright side, there was only a slight breeze, and conditions were quite pleasant. 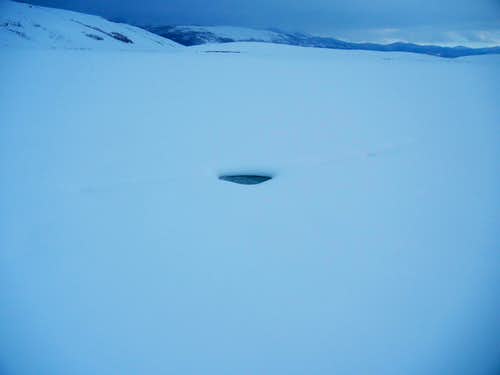 Finally, my path intersected a snowmobile track and my pace increased considerably.  I've skied on snowmobile tracks lots of times but I had never seen ones like these, perfectly smooth soft grooves spaced just right for my skis.  The two types I was used to were choppy and choppier.  These ones were sublime and a real joy to ski in.  In the distance though, they looked shiny with little snow cover.  I was apprehensive, but they were just a wee bit slushy in just one spot with the rest of the small shiny spot just being icy. 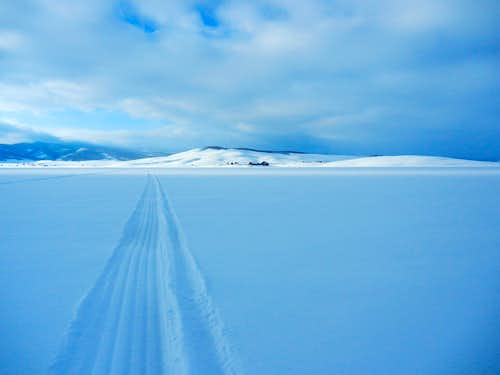 Heading to the marina

The marina was looking super close but every time I glanced at my GPS I was surprised at how far away it actually was.  As I homed in, nothing looked right.  Hmmm, where exactly was my car?  I had set a waypoint for it at the start but apparently my GPS hadn't been synced and it was way off.  I ended up circling around while realizing this, as I figured my car was not really in the middle of the lake.  At last, there it was, my trusty Subaru, the last car in the parking lot at 5pm, soaking up the final rays of the day's sun. 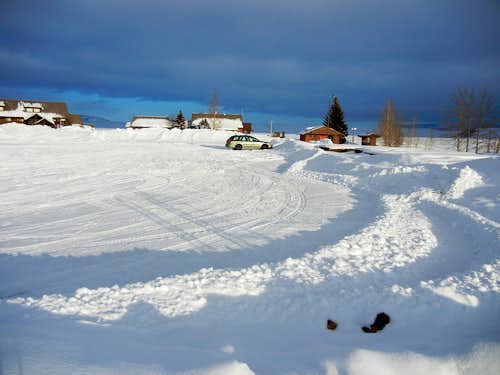 Last car in the parking lot

I know what you mean by being "by yourself" like this ... the
utter silence of the place must have been DEAFENING, but comforting
to those of adventurous spirit and insightful courage.

My memories of Strawberry are motorboats, jet skis and obnoxious
fisherman seeking the BIG ONE for their greasy frying pan.

Sometimes, the least-traveled path is the best one to take!

Thanks Larry. I wouldn't want to go there on a Saturday, but I've now been there on 4 different trips midweek and it's been peaceful each time. It's big enough that there's room for everybody.

Agreed ... and seems like Strawberry would be a GREAT location
for a Subaru commercial !! :- )

I know what you mean!

I've started having lots of fun trying to figure out how to get up obscure local peaks. Sometimes it takes numerous scouting trips and hours spent staring at maps and Google Earth. Much more interesting than just picking a trail out of a guidebook. A lot of the peaks around here are cliffed off or many miles from the road and present quite a challenge.

Re: I know what you mean!

I spend a lot of time looking at Google Earth too.

This was an enjoyable read. It made me reflect on my experiences of skiing across Utah Lake to Bird Island in the late 80's. That was back when Utah Lake could get some trustworthy ice thickness on occassion. I also had a map of the geothermal areas around the lake so I knew what areas to avoid...

Re: Thanks for sharing

Interesting. I looked up Bird Island on a map and it looks tiny! I'll have to try to spot it sometime when I am down that way.