Isle of Skye Map
The purpose of this page is to provide a starting point for those interested in climbing on Skye.  For a detailed description of Skye, please see Wikipedia, though I've paraphase it below:

Skye or the Isle of Skye (/skaɪ/; Scottish Gaelic: An t-Eilean Sgitheanach or Eilean a' Cheò) is the largest and most northerly large island in the Inner Hebrides of Scotland.[Note 1] The island's peninsulas radiate from a mountainous centre dominated by the Cuillins, the rocky slopes of which provide some of the most dramatic mountain scenery in the country.[9][10]Although it has been suggested that the Gaelic Sgitheanach describes a winged shape there is no definitive agreement as to the name's origins.

The Black Cuillin, which are mainly composed of basalt and gabbro, include twelve Munros and provide some of the most dramatic and challenging mountain terrain in Scotland.[9] The ascent of Sgùrr a' Ghreadaidh is one of the longest rock climbs in Britain and the Inaccessible Pinnacle is the only peak in Scotland that requires technical climbing skills to reach the summit.[16][26] These hills make demands of the hill walker that exceed any others found in Scotland[27] and a full traverse of the Cuillin ridge may take 15–20 hours.[28] The Red Hills (Gaelic: Am Binnean Dearg) to the south are also known as the Red Cuillin. They are mainly composed of granite that has weathered into more rounded hills with many long scree slopes on their flanks. The highest point of these hills is Glamaig, one of only two Corbettson Skye.[29]

The northern peninsula of Trotternish is underlain by basalt, which provides relatively rich soils and a variety of unusual rock features. The Kilt Rock is named after the tartan-like patterns in the 105 metres (344 ft) cliffs. The Quiraing is a spectacular series of rock pinnacles on the eastern side of the main spine of the peninsula and further south is the rock pillar of the Old Man of Storr.[30]

For hardcore details about all "walks" on Skye, please see WalkingHighlands.


The Ranges of The Isle of Skye 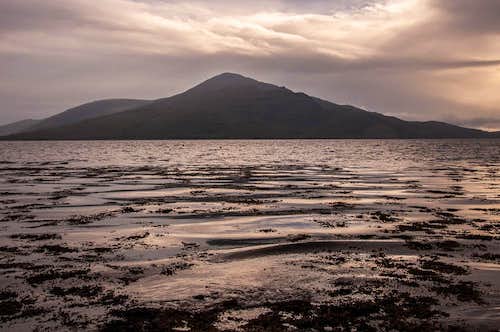 The Isle of Skye and the peaks of Kylerhea are first seen from Eilean Castle on the eastern approach from Kyle of Lochalsh and dominate the view all the way to the Skye Bridge. These are not the peaks that the majority of people that visit the Isle of Skye come to climb, but nonetheless they are decent enough peaks for the avid hill walker.

Kylerhea, in the south-eastern pennisula of the Isle of Skye, is predominantly made up of boggy moors and fine little lochans. It has a delectable charm and the peaks on either side of the Glen Arroch road give a taster of the delights which lie ahead. There are only 3 peaks in Kylerhea of note. The first 2 lie to the north of Glen Arroch and are Sgurr na Coinnich and Beinn na Caillich. Both offer fine views of the Red and Black Cuillins. The 3rd peak is Ben Aslak to the south of Glen Arroch, which has excellent views south down the Sound of Sleat. 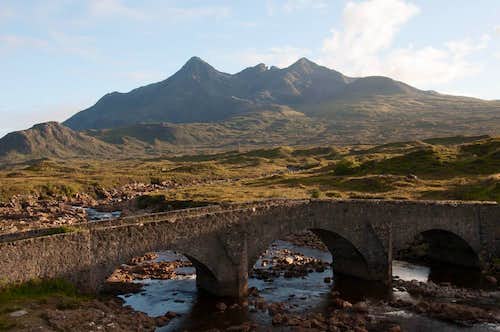 Blaven Group - Blaven (Bla Bheinn) is considered an outlier of the Black Cuillin. Despite it being gabbro, it is not technically a Black Cuillin because it is east of Glen Sligacan,but it's also not Red and it is a Munro... why can't this be easy!

Described by sources as being a 19 mile landslide. This feature can be seen quite easily from Portree and exends well up the peninsula; it contains the very popular walk the "Old Man of Storr" which is found below the Graham "The Storr".

As a testament to how old their classification is, or possibly as a nod to the clearly superior altitude unit (not likely), we find that the British use feet.  The elevation classes that are relevant to Skye are as follows:
Please note that:

Skye is linked to the mainland by the Skye Bridge, while ferries sail from Armadale on the island to Mallaig, and from Kylerhea to Glenelg. Ferries also run from Uig to Tarbert on Harris and Lochmaddy on North Uist, and from Sconser to Raasay.[16][103]

Bus services run to Inverness and Glasgow, and there are local services on the island, mainly starting from Portree or Broadford. Train services run from Kyle of Lochalsh at the mainland end of the Skye Bridge to Inverness, as well as from Glasgow to Mallaig from where the ferry can be caught to Armadale.[105]


The Isle of Skye Airfield at Ashaig, near Broadford, is used by private aircraft and occasionally by NHS Highland and the Scottish Ambulance Service for transferring patients to hospitals on the mainland.[106]

The A87 trunk road traverses the island from the Skye Bridge to Uig, linking most of the major settlements. Many of the island's roads have been widened in the past forty years although there are still substantial sections of single track road.[4][16] 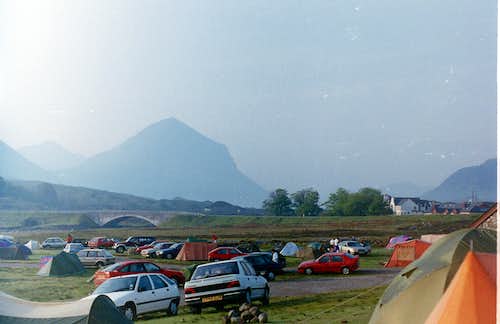 The Campsite at the Sligachan Hotel 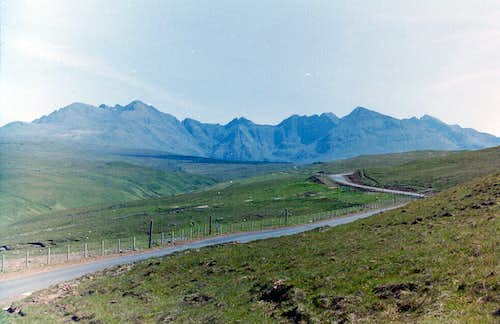 The road to Glen Brittle 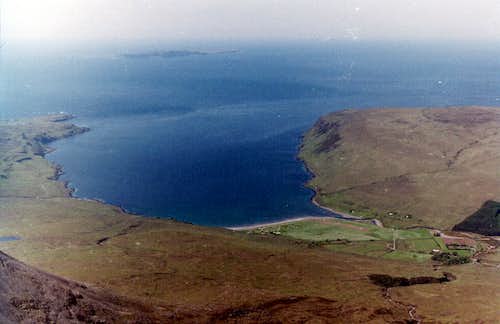 Glen Brittle campsite from the ridge
It would be possible, though a bit of a drive if you are only going to visit the Trotternish, to use the Sligachan Hotel as a base of operations.  We were able to explore in the Trotternish and Black Cuillins from there; the Tallisker Distillery is also reachable from the hotel.  The hotel has wi-fi and is also a micro-brewery; the food is reasonable and delicious.  They also host a camp ground next to the hotel if you are willing to risk the weather.  Please click on the link below to find up-to-date information about the hotel:

http://www.sligachan.co.uk/
The other main camping site giving access to the Cuillin Ridge is located on the west coast at Glen Brittle this is a remote location but with an unrivalled view of the whole of the Black Cuillins.

The Campsite has a shop for essential supplies.
Wild Camping

Wild camping is totally legal in Scotland and can be done in various locations in Glencoe. This is due to the Land Reform (Scotland) Act 2003 that was mentioned earlier.


The Mountaineering Council of Scotland provides an invaluable leaflet providing a full breakdown of the dos and don'ts of wild camping in Scotland. Wild Camping, A guide to good practice.

The weather conditions on the Isle of Skye can alter rapidly due to its location on the western coast of Scotland and you should ensure you are fully prepared for all weather eventualities. The most comprehensive forecast guide for climbing/hiking on the Isle of Skye is the Northwest Highlands Forecast provided by the Mountain Weather Information Serice (MWIS). 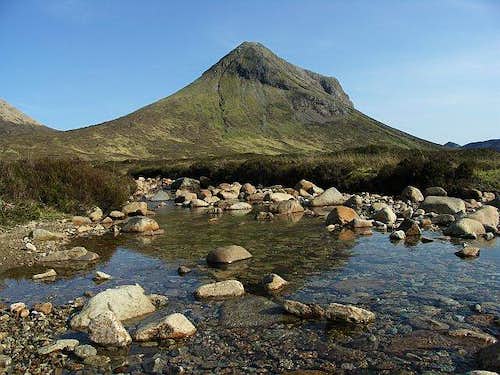 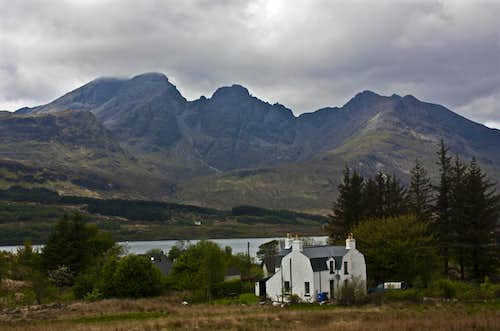 Torrin
Gaelic is a very rich language topographically, and this basic guide to some of the elements of place names should hopefully assist in understanding how/why the mountains on this page (and Scotland as a whole) are derived. It should be noted that in Gaelic a describing word would be placed at the end of a mountain name; i.e. Sgorr (peak) Dhearg (red), Sgorr Dhearg translated is Red Peak. This would read in English as Peak Red. 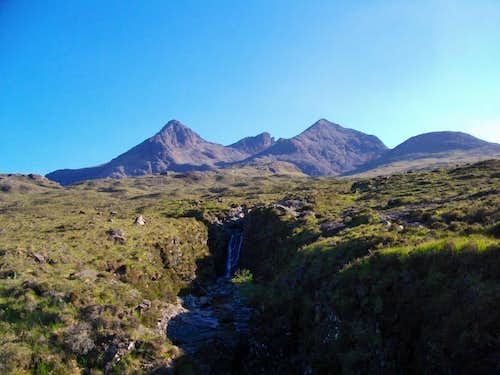 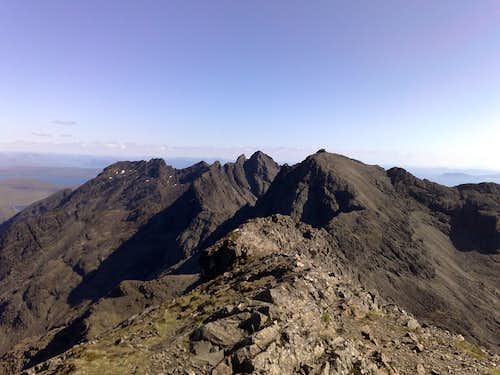 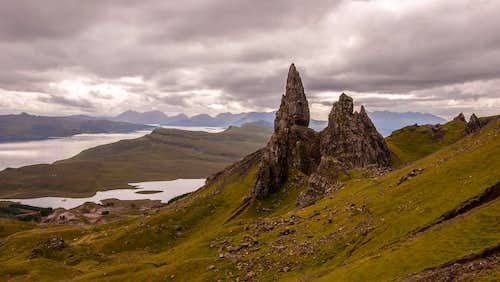 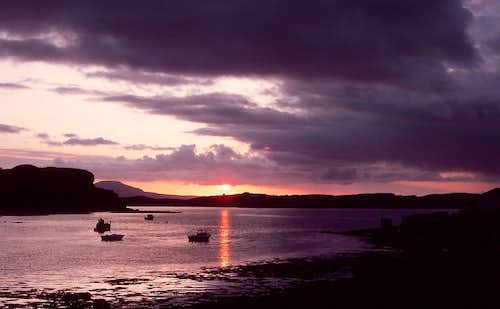 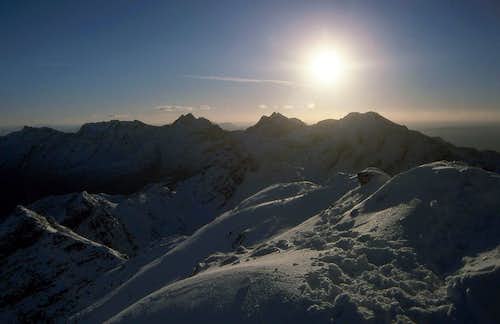