It Ain’t Over Til It’s Over 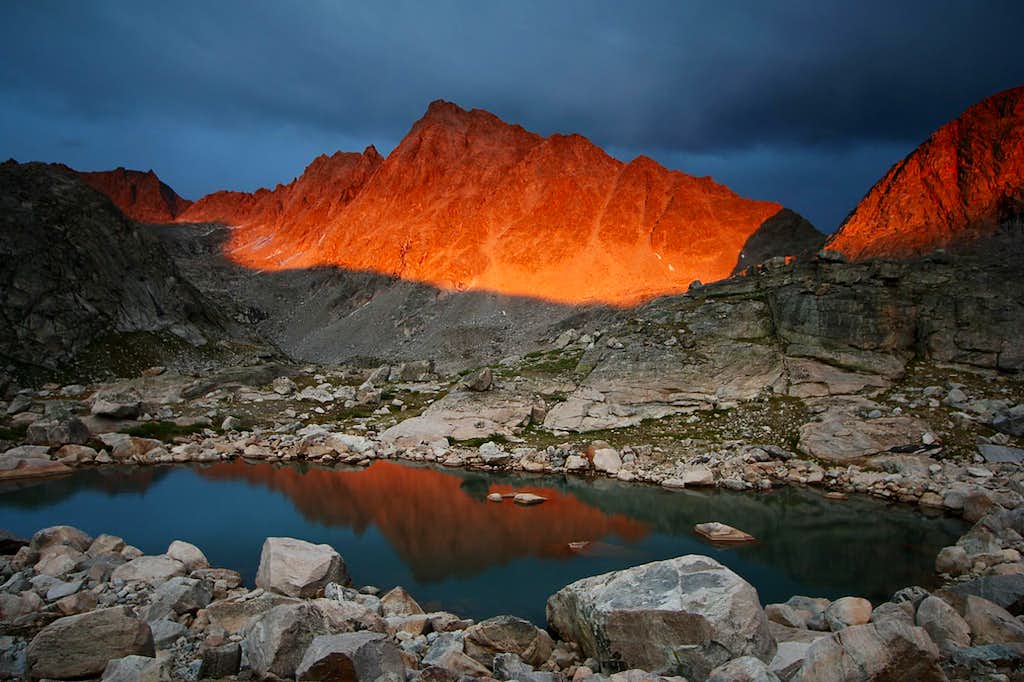 Upon our return from Fremont Peak I scouted the area around camp for a sunset vantage, and settled on scampering up a large glacial erratic where Ellingwood Peak was reflected in a tarn. With my my tripod set up, I got comfortable with a good book and a snort of Jack Daniels, and hoped for some evening alpenglow. The leaden sky did not offer much promise. Around 8:00 PM Jeff called up from camp, ”It’s not going to happen, big guy.” I looked out to the west. Right on the horizon was a thin line, a paler shade of grey than the blanket of dark storm clouds. "You’re probably right, but I’ll hang out a bit longer, just in case." Ten minutes later a faint glow struck Ellingwood and the surrounding peaks. Within 60 seconds it was a stunning fire red. A minute later the game was over. August, 2007 Canon Rebel XT, 10-22mm Canon Lens, 2-stop GND filter.
« PREV NEXT »

Thanks brenta. I wasn't sure it was going to happen but the sun dropped into the thinner layer of cloud and produced a truly dramatic alpenglow.

Well worth the wait and I commend your patience. That shot is better than most likely any sunset shot you would have gotten.

Thanks Dean. This goes down as a top-ten sunset for sure!

I had to decide between this view, and another where I have a wider zoom and capture the glow on the neighboring peaks, though they are not reflected in the pond. I finally settled on posting this one.

Thanks very much Hiltrud. It was a privledge to be there when this happened.