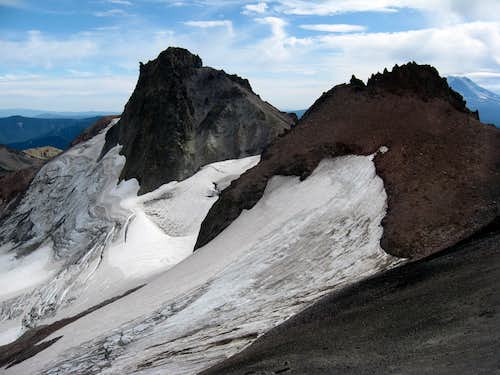 Ives Peak and McCall Glacier from the north

At ~7920 feet Ives Peak is the fourth highest peak in the Goat Rocks Wilderness. It's centrally located on the spine of the Goat Rocks which runs northwest to southeast, between Old Snowy and Big Horn.  The northeast face hosts the active McCall Glacier which feeds the North Fork Tieton River.   There is no trail to the summit and for this reason it's a peak that is seldom visited. Nothing technical is required to make the ascent, but off-trail travel is enough to deter the average hiker from making an attempt. 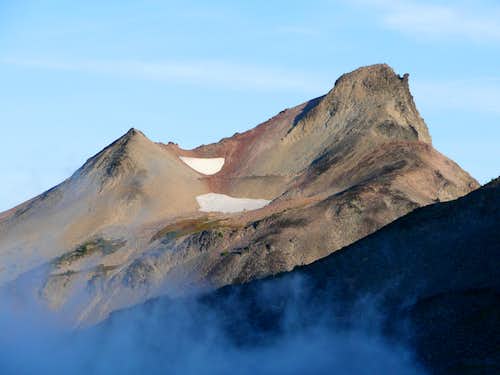 Ives Peak from the south

On a clear day, summit views include the three volcanoes, Mount Rainier, Mount Adams, and Mount St. Helens as well as several other Goat Rocks summits, Hawkeye Peak above Goat Lake, Johnson Peak, nearby Old Snowy Mountain, Big Horn, and Gilbert Peak. There are several routes to reach the summit, the best being a high alpine ridge traverse from Old Snowy. See the routes section below. 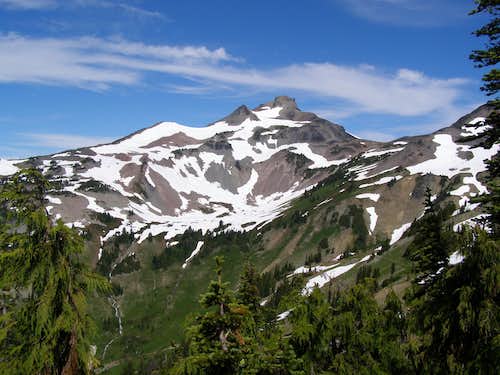 For those with the necessary navigation experience and route finding skill, reaching the summit of Ives Peak will be no great challenge. If you come by way of Old Snowy you will encounter a naturally formed rock arch which stands roughly 20 feet high. This is an incredibly rare formation. 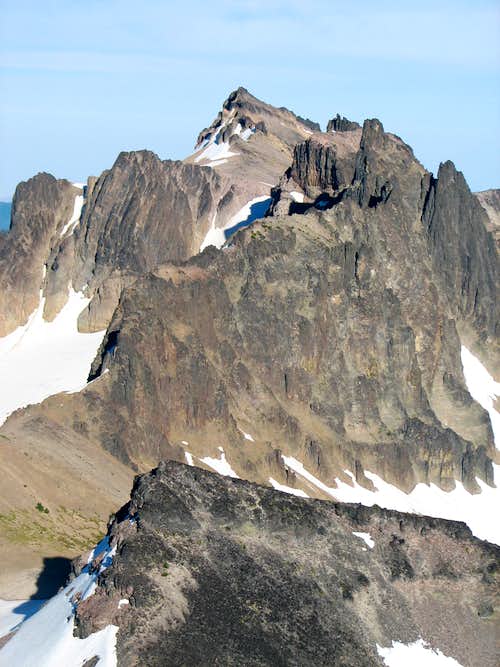 As with all areas in Washington which are volcanic in origin, loose rock is the name of the game. Whether you are just hiking along the spur trail to the summit or you intend to make the traverse over to Ives, don't trust the rock. Talus that looks settled might not be and any handholds you pull on have the potential to pull out. A little caution goes a long way.

Starting from the Snowgrass Flats trailhead, hike the trail to a junction in under a tenth of a mile. Do not turn left. This it the Berry Patch trailhead connector trail. Continue along the trail for 2 miles as it goes northeast and gains 400 feet only to lose it again before crossing the Goat Creek bridge.

Beyond Goat Creek the trail turns toward the east and begins ascending north along a ridge. At 5600 feet there is a trail junction in a flat area with a few camp spots. Do not turn right. Rather continue along the main trail as it ascends the minor ridge. At the next junction located at 6140 feet, turn right and continue for another half mile to a T junction with the PCT. 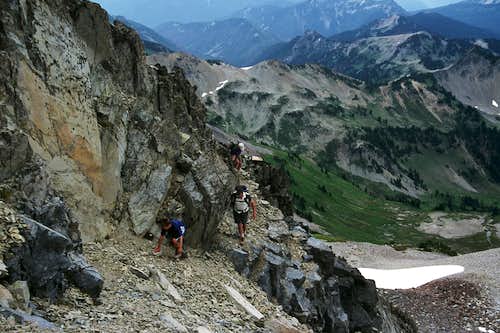 The ledge in the cliff band

Take the Pacific Crest trail north from Snowgrass Flat to 6700 feet and then turn east off-trail.  Ascend talus and scree to the saddle just northwest of the peak. At the final slope below Ives, ascend a boot path through scree, heading for a notch between two rock formations. Above the notch you will come to a small cliff band. Descend slightly to reach a gap in the cliff band with a ledge (class 2). Take the short exposed ledge to access the upper south face and complete the route by ascending steep loose rock to the summit.
Eric Willhite has some good maps at the bottom of his trip report.

It is recommended to start from Old Snowy so as to avoid climbing loose scree below Ives Peak. A trail allows access to that summit and makes for an easy start. The majority of the traverse is class 2 but a few class 3 sections might be encountered depending on conditions. Gendarmes and craggy rock formations along the crest can be easily avoided by dropping down slightly on either side of the ridge. In early season you will want an ice ax and possibly crampons to traverse steep snow.

Near the end of the traverse you will come to the McCall Glacier. Some people pass this section by staying inside the moat, while others walk on top of the glacier. It's possible to avoid this section by dropping down onto the southwest slope below the ridge crest. 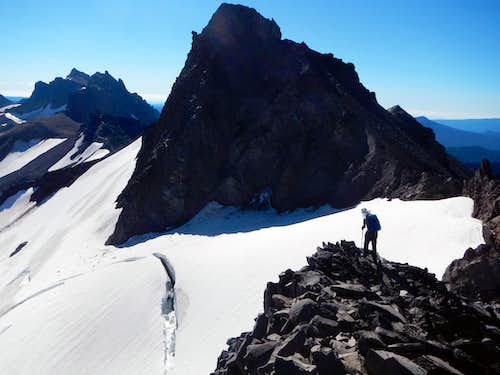 At the final slope below Ives, ascend a boot path through scree, heading for a notch between two rock formations. Above the notch you will come to a small cliff band. Descend slightly to reach a gap in the cliff band with a ledge (class 2). Take the short exposed ledge to access the upper south face and complete the route by ascending steep loose rock to the summit. 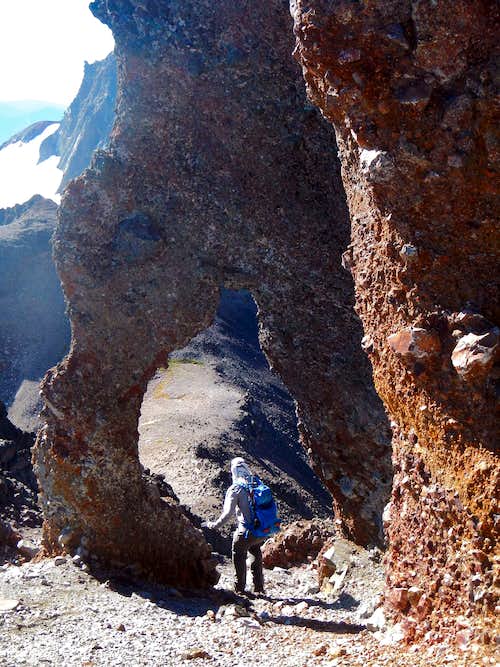 Passing through the arch on the way to Ives Peak
A Northwest Forest Pass is no longer required to park at the Snowgrass Flats trailhead but it is required for the Berry Patch trailhead. Day use is now monitored. Self-register permits for overnight trips and day use are free at the trailhead. Make sure each group has one permit.

Use established campsites above treeline to avoid compromising fragile alpine vegetation. This area is known for blooming wildflower meadows in summer. There are spotty sites and a larger alpine camp near the PCT. There is additional no-fee camping permitted at Chambers Lake Campground near the Berry Patch trailhead, complete with compost latrine.

This area averages 25-40 feet of snow each winter, and may take until mid-July to melt out completely.  Keep in mind that the area is popular in the summer and it can get crowded on the weekends. Winter access would at least require chains and 4x4, but could make for a decent ski/snowshoe route. Call for current conditions. 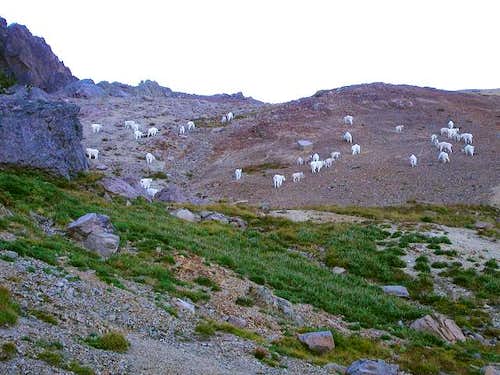 They don't call this area the Goat Rocks for nothing