I have always wanted to climb Orizaba ever since I learned about it. I first learned about the peak and its sheer elevation (18,400 feet) on my second trip to Mexico, backpacking during my Junior college break. I tried to convince my backpacker friends to give this summit a shot (they all are non climbers) but they balked, saying, "This is spring break!! we should be drinking!!!"
On my third excursion into Mexico, the chances have gotten considerably better. My climbing pal Scott and I had came from Colombia, touching every country in Central America and their tallest peak (the exception being Belize). But alas, it never came to fruition. Due primarily to our other commitments, insufficient funds, and the sheer size of Mexico.
Having graduated last year, I was able to land a teaching job. During my prep hours, I would relentlessly surf the internet, looking at routes, imagining, and envisioning myself bagging those majestic peaks. Then one day, Scott texted me, "Pico de Orizaba; Thanksgiving?" I immediately looked the page on Summit Post and replied, "Hell yeah!! It is on"
Several weeks later, Scott and I face timed (video chat) and discussed about the logistics of trip. Scott picked this moment to reveal that he has invited his sister to join in our expedition, and asked what I thought about it. At first, I immediately thought "oh shit, here is a non climber with virtually no experience...she is going to slow us down and these peaks in Mexico aren't playing." But i quickly re-calibrated my thinking and managed to squeak out a, "Oh yeah? I think it would be fun" Scott's sister, Shana is an athletic girl, probably the most athletic deaf girl out there, having been to Deaflympics (deaf's version of Olympics) four times (2 track and field, 1 indoor volleyball, and 1 beach volleyball) But that does not change the fact that she has not climbed all of the peaks Scott and I had suffered our trails and tribulations on such as Mt. Rainier, Borah Peak, Gannett peak, and so on. The die is cast. (pun totally intended)
As Scott and I planned for this expedition, we were accosted with these three questions that potentially could make or break our trip:
Should we rent a car?
Should we bring a rope?
What is our acclimatization plan?
We decided to rent a car. It was the best decision of the trip. Mexico is relatively safe, and considering our time frame, a time saver. So for those who are deliberating whether to rent a car or not, my suggestion is a wholeheartedly YES. Admittedly, Mexicans drive crazy and don't usually follow lanes, lights, and such but if you are at least an adequate driver with excellent hand and eye coordination, you shall be fine.
Should we rope up for the ascent of Pico de Orizaba? We have pored the internet over the matter, but the information we gleaned was inconclusive. They all basically said, it is your decision, it all  depends on conditions of snow, your skill/ability and such. It was maddening. We decided to not bring a rope, but did bring our harness so we can rent a rope if necessary. Answer? Rope is completely unnecessary for Pico de Orizaba. We might have gotten good conditions, but even if it was icy, it is still unnecessary. It does not make sense to bring a rope on a mountain like this. If you fall, you self arrest yourself. There were no crevasses.
As for the acclimatization plan. It was tricky. We all came from sea level, and to be climbing over 17,000 feet in a matter of days is kind of nuts. Scott and I disagreed a lot over this, but in the end we followed his plan. Which was to climb Iztaccihuatl slowly first, then blitzkrieg the hell out of Orizaba.
We did exactly this:
Day 1: Fly in Mexico City late, rent a car and get to Amecameca
Day 2: Arrive La Joya Hut (Base camp of Iztaccihuatl) 1 hour acclimatization hike
Day 3: Left La Joya at 2 pm, arrive Gupo de los cien Hut at 6:30 (15,420 ft)
Day 4: Summit push; left hut at 5:45 am; Summit at 9:15 am
Day 5: Leave Amecameca and drive to Tlachichuca; then 4x4 ride up to Piedra Grande Hut
Day 6: Summit push: Left at 2:50 am. summit at 9:10 am
Guess what? It worked like a charm. Six days to climb both Iztaccihuatl and Orizaba?!?! But it worked.
Here is the trip report interspersed with pictures. 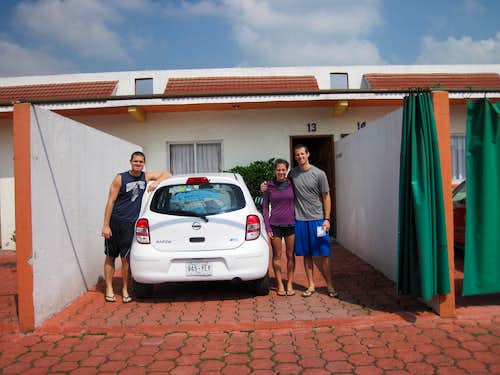 The gang and the rental car
Us at a hotel in Amecameca. The "mexican" garage was nice; we could hang out our dirty clothes outside. 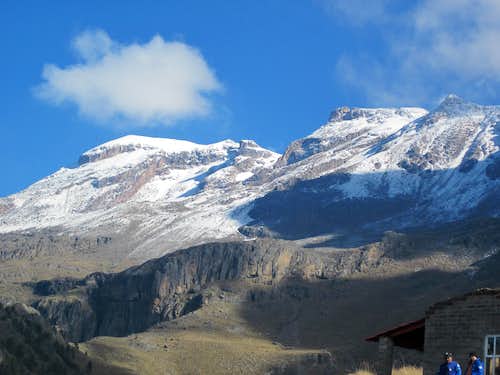 Izta strutting her figure
The clouds parted, we finally saw the ever elusive Izta. From this sight, we knew Izta would give us a handful. 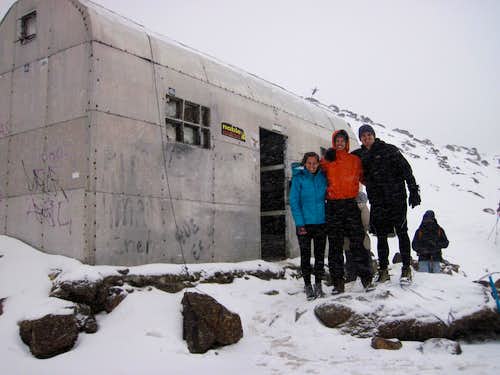 Snowstorm pelting us at the hut at 15 K
While we were on our way up to the hut, it started snowing. At first it was minor, but it grew profusely. The snow went on all night, and next morning it was an all out snow climb. Shana and Scott brought their crampons but I didn't. Long story short, the hiking boots i had on were not crampon compatible. So i chose comfort over power, but it turned out to not be a problem. 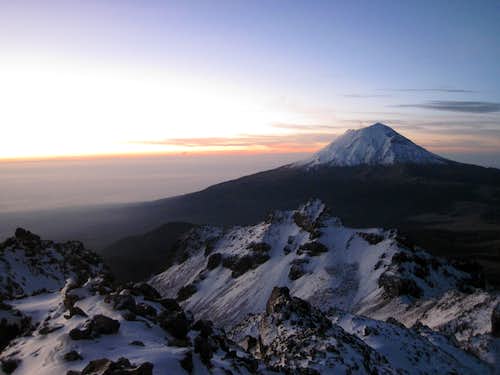 Rosy fingered dawn and the majestic Popo
While we were climbing, I started to feel worse and worse. I didn't get much sleep the night before (30 mins max) and I had difficulty eating. I was feeling a bit funny, but thought it was my body adjusting to altitude. However, as the sun dawned, and we continued to climb, I started to have this sensation where I wanted to throw up. I ignored it, and was able to continue on. Scott seemed to be doing well. Shana was doing magnificently. No slope, rock, or movement seemed to scare her. Altitude didn't seem to bother her as well, as she often led us out in the front. Scott and I looked at eachother, "oh man, this is HER first mountain and she is outperforming us!?!?" At first I privately thought that it was beginner's luck and that she didnt realize that mountaineering is not a sprint sport, but rather a long monotonous marathon. But nope, she pushed on gaily. As we crested over several fake summits, I started to feel downright awful. It has become all out struggle for me, as i paused and wheezed every ten steps. I thought, "Altitude is at work here, nothing more...toughen up bastard!!" The summit finally came into sight, and it was so close. It was also when I spat out blood. Red blood. I couldn't believe it at first. The red blood served as a stark contrast from the pearly whites of snow. Red and white? My altitude befuddled brain tried to assess the situation. Red and white? Shit, cannot be good. Scott and Shana made it to the summit while I was lying, wheezing a mere 200 feet below. I have heard stories of climbers turning around a mere 300 feet from summit on Mt. Everest. I always wondered what they were feeling at the moment and why they couldnt just pushed for other 300 feet. But now, I found myself in that position. The summit was right there, clear as a polar bear in a rainforest. It was in plain sight. But my body couldn't react to my mind's ministrations. Finally, at one point, I'm not sure when, My body listened my mind and clambered over to the summit.
It was not until later in the base camp hut of Pico de Orizaba, not until I read the sign posted there about AMS (Acute Mountain Sickness) that I finally realized that I had AMS. Make no mistake about it. Shana and Scott were shocked as well, since three of us never had encountered this type of experience. What makes it even more harrowing is that the sign in hut was donated by a family whose son died on Orizaba due to AMS. He was 23 years old. My age. We all learned a lesson, and what is better teacher than experience itself? 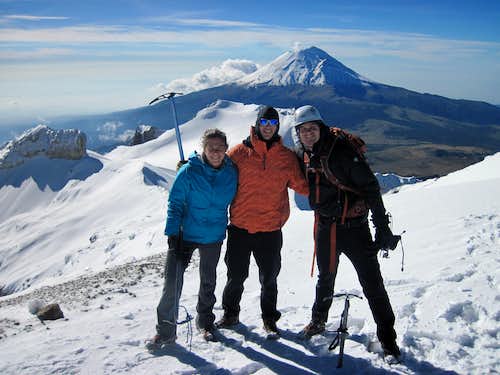 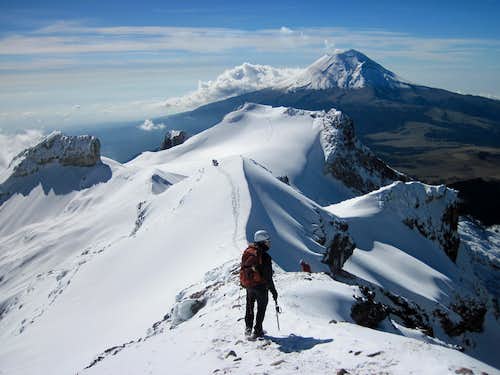 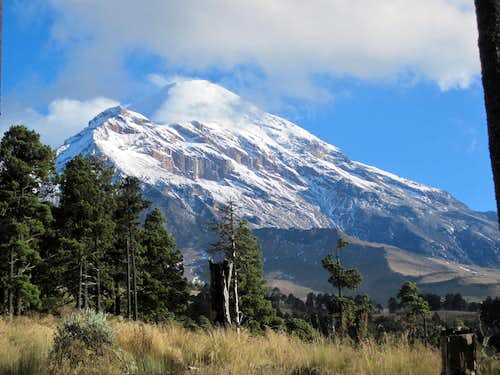 Finally, Orizaba!
4x4 jeep took us to the base camp of Orizaba. The vehicle's maximum speed was like 25 mph, so that took a while. We rather enjoyed the scenery on the way. Views of Orizaba from the jeep was pretty intimidating. 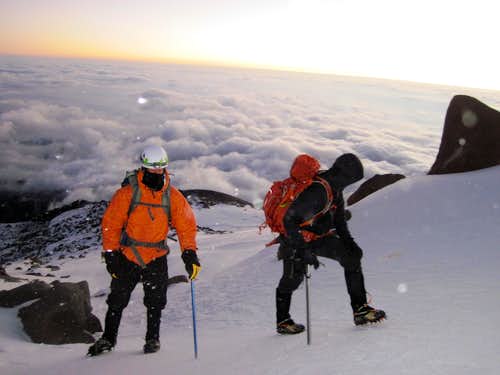 The first picture of our climb; it was bitingly cold
As stated previously, we left the hut at 2:50 am and made our summit push. At the night, sometimes it is easier to only follow your circle of vision from the head lamp and plod upwards, uncaring of everything else. We got in and out of the Labyrinth just fine. It took us longer than we thought it would take, but then again, Orizaba is a massive one. The last 1/2 mile of the Labyrinth was surprisingly steep, and that was when the winds started hit us. As you can see from the picture above, the wind was blowing at us headfirst. We stopped and huddled beneath one of the rocks and waited a bit for sun to come up. We were shaking from the cold, stampeding our feet and toes, and seeing the glorious scenery that was unfolding beneath us. It was one of those moments where you ask yourself....why am I here? It was as if the life you have had all led to this one culmination point, this NOW, present feeling that you are exactly where you are supposed to be. 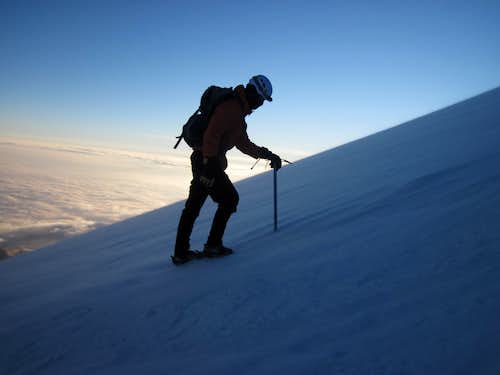 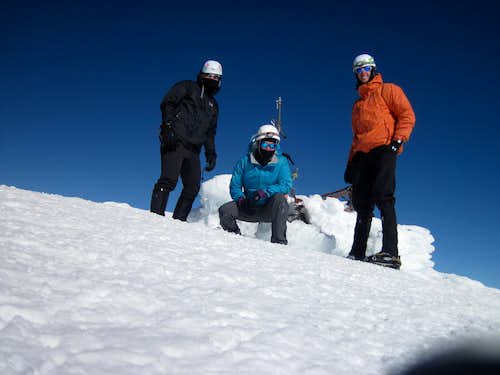 Summit at lofty 18,491 ft!! Not exactly the greatest picture 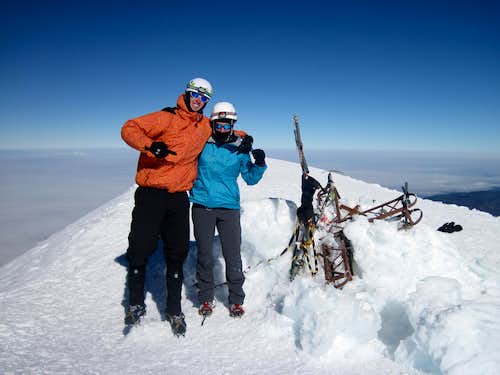 Shana and I. The lady of the hour
The climb was a slog fest. It was all up up up and more up. It never seemed to end, and there were always more snow in front of you. I continued until i saw the sky instead. As I  was reaching the summit, my legs gave out underneath me and i fell on the plateau. I, then, let out the scream of a conqueror. We stayed on the summit for about an hour, the sun shone on us brilliantly and there was not even a whisper of wind. 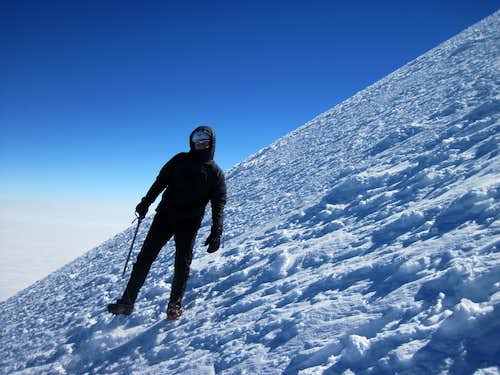 Messing around on the descent 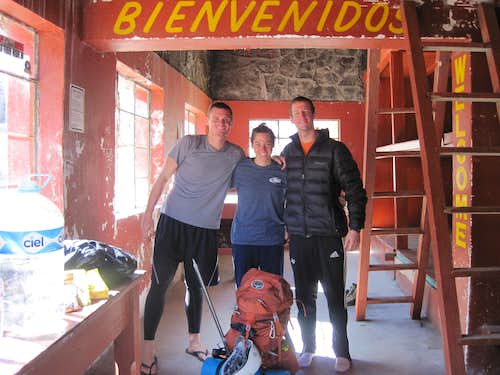 Safely back in the hut; Success
All in all, definitely a fun trip. Shana wowed both scott and I with her majestic performance. I mean, who in their right mind, would climb Izta and Orizaba as their first two peaks?!? She has proven that she is an extraordinary athlete, and one day would make an exceptional mountaineer.
For the climb itself I would rather Izta over Orizaba, but for the overall summit experience; Orizaba reigns supreme.
Shana made an excellent video of the trip; https://www.youtube.com/watch?v=Gxdu9u7Lqys&feature=youtu.be

I did the same trip during spring break my senior year of college...except we did Orizaba first :)

Such a classic international climb...nice work

Great achievement - and I enjoyed your account and photos. I climbed Popo in the late 1980's - when you still could (I believe it is still 'closed'?). I can remember regretting that there wasn't time to tackle the other two - especially Orizaba.