Iztaccihuatl via Arista Del Sol in one day

Getting to the Mountain (Friday, November 8th)

Having attempted to read every trip report about the mountain and still get a few surprises was not unexpected considering a wide variety of inconsistencies in the said trip reports. So here is the unabridged version of how we did it.

Renting the car (7AM)

After flying to Mexico City from Tijuana, we rented a car. Car rental is a lot cheaper using online websites such as Travelocity or Expedia, but as usual local taxes/fees/insurance increase the cost of car rental by a magnitude of 4. We then used a preloaded map of area and navigated to Amecameca. I was at the wheel, Vadim was the navigator, and Natalia handled accounting. Coming off the red eye, having slept 3 hours at night, and being unfamiliar with road signs I failed to blend in and got pulled over. I doubt having the "Fox Rent A Car" in large letters on my license plate frame helped. The "cop" said we could settle things on the spot for 300 USD, but after 15 minutes of hearing "no" and "200 pesos" (the local going rate of a bribe), he conceded and we were on our way.

The drive to Amecameca was uneventful and straightforward. However, navigating the town was a bit confusing and at times everything seemed chaotic. So we parked the car a couple blocks away from the town square and found Hotel San Carlos. Next door to the hotel was the "Park Headquarters". We inquired about information regarding the park permits, conditions, rules and such. We learned to expect little after having met mostly people whose English vocabulary consisted entirely of the word "sorry" and *the shoulder shrug* (technically sign language). However, at the "Park Headquarters" there was one person who spoke very decent English.

First big surprise came when we realized there was no gas for my stove. No propane/isobutane or any other gas canisters, nada. Having read reports about gear for sale and rent at La Joya, we were unfazed, but decided to stock up on food that would not require cooking.

The man at the Park Headquarters explained that the only place to get permits was at Paso de Cortes. He mentioned that rescuers are on the mountain only on Sat and Sun and recommended that we camp at La Joya because it is the only place that is "monitored". The office that sells permits is open ~8AM to ~9PM (unconfirmed). Having decided that 8AM+ start was not acceptable we headed to La Joya.


The drive through Amecameca was painful due to oversized speed bumps, but once outside town the road suddenly turns very scenic. The scenic road goes through a lush forest with numerous picnic areas. At Paso de Cortes the road was blocked and we bought 6 permits from the Park-Information-Center-looking building (3 permits for Friday and 3 permits for Saturday). Using mostly sign language we also found out that the closest place to get gas for our stove was Mexico City. The gear vendors apparently visit La Joya only on Sat and Sun at variable times (usually 8AM). From Paso de Cortes we had to lift the unlocked boom barrier to gain access to the 7km dirt road that took us almost 40 minutes. We used the GPS with preloaded maps to navigate this area as well.
At La Joya (5PM)
After a quick hike, we ate some food, setup our tent. The weather was very cloudy and rain seemed imminent. The weather forecast called for rain in the afternoon followed by clear skys in the morning. People coming down confirmed that Friday morning was clear and the clouds began to roll in closer to noon. Before passing out we heard rolls of thunder in the distance and went on to dream about mild weather.  Surprisingly, our sleep was disrupted by a flash mob of signing teenagers who arrived on a bus. A guided group came a little later and setup camp 150 meters to the North. Nevertheless, we were extremely tired and managed to get probably close to 9 hours of sleep. 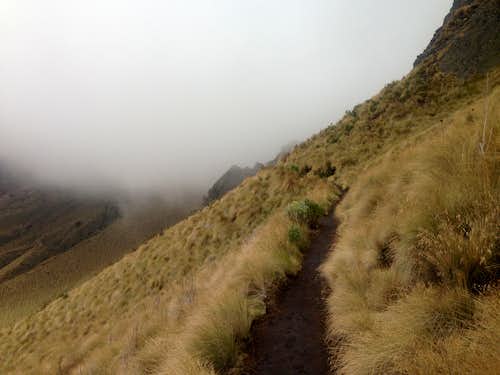 First part of the trail 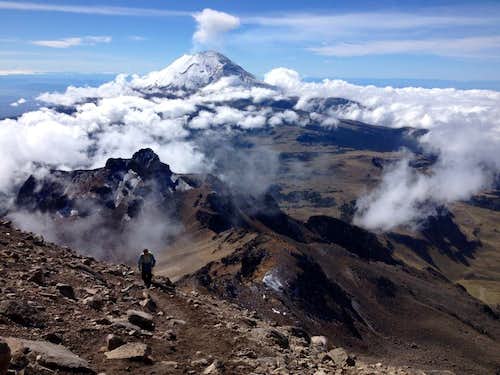 Needless to say this wasn't easy. Mild headache, a night filled with disruptions, and moist darkness make for a slow morning.

We packed the night before and took or planned to take the following gear:

1. Hiking polls
2. Crampons (the snow was soft enough to boot up)
3. Ice Axe (I switched to the Ice axe on steep snow)

4. Helmets (I would highly recommend, even though I survived)
5. Warm clothes (the down jacket and warm gloves proved unnecessary)

Within minutes we run into multiple tents and realize that maybe we should have camped here and away from the bus and the party. From here the trail goes up sharply. Frozen mud proved to be great footing. The air feels light and we move slowly. We arrive at the hut in 3 hours.


NOTE: The attached track starts at the Grupo de los Cien hut.
We take our first major break to decided where to go. The descriptions are somewhat confusing, but it feels a bit more clear when you can see the faint trail. Also keep in mind that you are following RED dots on rocks. The route climbs up but stays way left of the ridge for a long time. The picture below has a cross (middle/center) and the hut (right/center). You will need to come to this cross on the way back in order to avoid cliff outs. Just before the cross the trail turns into Class II maybe Class III scramble. I would say helmets are almost mandatory in this section because small rocks bounce so high off the boulders above that sometimes you only hear them flying past you. If one were to hit you in the head, it could be deadly. Of course, I left my helmet at the car. I believe the blue line on this picture is what you end up doing if you follow the RED dots and then YELLOW dots. 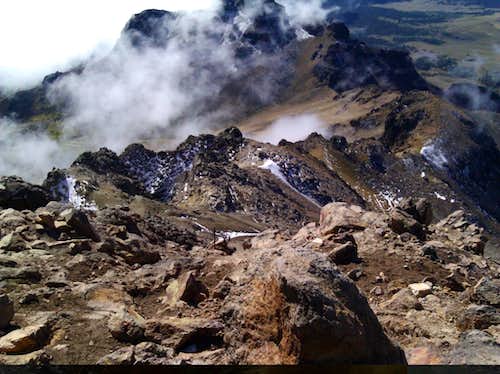 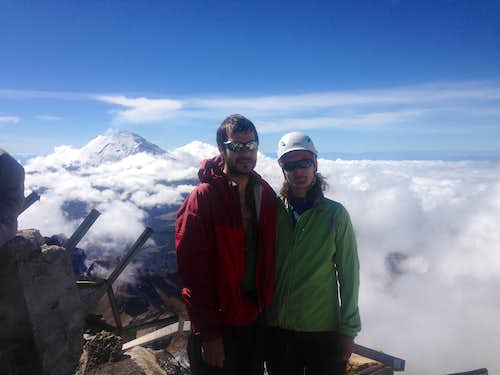 Refugio Luis Mendez
At 11AM we peaked out at the Luis Mendez refugio, which probably used to be a structure. From here a beautiful snow field opens up. A guide and the fastest guy of their group were waiting for the rest of the group to catch up. They informed us that we were about 1 hour away from the summit and that the views would only keep getting better. They were spot on, on both accounts.From here the route stays on top of the ridge as much as possible.

After the refugio you come down some ways and come up to a higher sub-peak. From here you can see the glacier and the rim of the summit crater. The altitude keeps draining all of our strengths and the thought of climbing on the way back is demotivating, but the summit feels close and the way down to the glacier is quick and easy. Once you climb out of the glacier there is one more dip, but it is really small. We follow the ridge as three climbers (the rescuers?) encourage us. 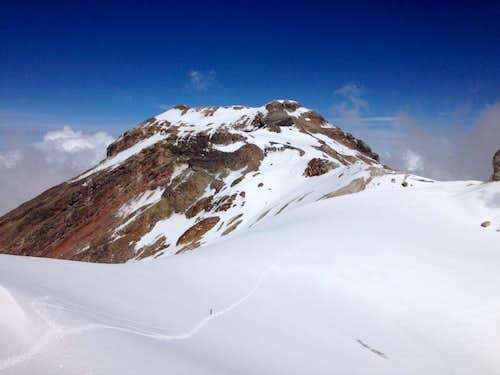 View of the summit past the glacier 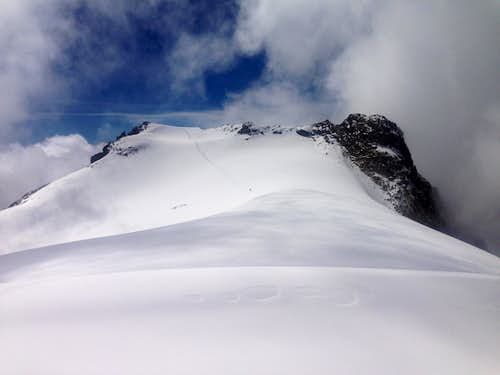 Looking back from the glacier

About 30 minutes before we came up on the crater rim, the clouds caught up to us and we were caught in a complete white out. On the rim the tracks ended and we quickly decided to call our side of the crater, "the top", and not go into the white out in search of the true peak. We were less than 45 feet lower than the tallest part of the rim. For a few seconds the clouds cleared and we tried to take the picture of the crater. The failed attempt is below. 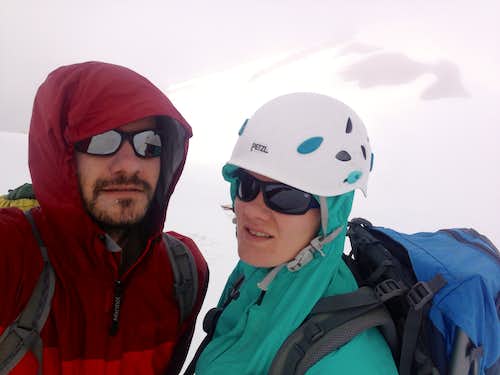 On the way down our worst fears came to fruition and the Humps proved to be extremely difficult to climb. After Fuis Mendez refugio we managed to come up on a cliff out and had to backtrack to the cross in order to come down. By the time we got the Grupo de los Cien hut, we lost plenty of altitude and had enough strength to get over the last hill. Nevertheless, the headache persisted to pounce our psyche almost all the way to Amecameca where we sat down for a dinner in the Cafe across the street from the Hotel San Carlos.

Dude did you climb orizaba? we are going there in two days and very very curious about the conditions. will follow your route for ITZA. many thanks

Nope, haven't been to Orizaba. Hope the route helps you.