Jakubina, 2194m, is the second highest peak in the western Tatras and one of the most prominents. The top lies entierely in the Slovak territory, but very close to the polish border, to which it joins at Jarząbczy Wierch, which is rather the continuity of this mountain than another top.
It separates on the slovak side the 2 valleys of Dolina Jamnická and Račková; on the North, behind Jarząbczy Wierch, the eastern half of the valley Dolina Chochołowska.
Its name probably comes from a village called Jakubovany, near the foothills of Baranec. This one is named after its protector - Saint Jacob (Jakub), and the peak is probably named after this village from which we see it: Jacob´s Mountains.
In Polish, this peak has a different name, "Raczkowa Czuba", from the valley's name in Slovak.


As seen from the South, especially from Pribylina, Jakubina presents a strange complex shape, almost terrifying, with rocky prominences looking like the backbone of some dinausaur; an invitation for the hiker looking for an entertaining ridge-walk. "Otrhance" is the name of this ridge.

However, the ridge of Jakubina is not from far the most visited in the western Tatras, and like Baranec, it is a place where one can savour the tranquility and observe frequently some chamois.

It all depends from which side you plan to ascend the peak.

- By public transports, these points are reachable by bus: from Zakopane for Chochołowska, and from Liptovsky Mikulas for Račková

The hiker must know that offtrails in Slovakia is tolerated only for mountain-climbing when accompanied by a registered mountain guide, or holding a licence of UIAA club (Not all zones, Natura 2000 zones are strictly forbidden, but there are none around Baranec).
However, Jakubina is served by many very convenient official trails so that offtrails is not really required, and I discourage one to try, it would be a very stupid way to get fined.

Border :
Since January 2008, both Poland and Slovakia belong to the Schengen european space, hence crossing the border is now allowed in almost all West Tatras (more precicely from June 15th 2008 which corresponds to the end of the slovak winter closure).
Let's mention anyway that Volovec and Rysy) were however allowed for hikers long ago before that.
But don't forget to always carry your papers in your rucksack if you plan to venture in the other country, even returning to the starting point.

There are 3 ways to visit Jakubina making a loop, 2 of them from Slovakia and one from Poland since 2008 (thanks to Schengen). * Loop from Poland (from Dolina Chochołowska):
This circuit visits the less visited eastern half of the valley Chochołowska (Jarząbcza Dolina), whose peak Jakubina makes the logic end of this hike. The approach in this valley is very long ! In old maps, you might find the car park marked in Polana Hucinska, but to protect this valley, it was moved much further at the border of the park, in the 90's. For this reason, Dolina Chochołowska is probably the less freqented valley in Polish Tatras (also because the most distant from Zakopane...). You can shorten the approach by bike, with yours or with the bike rental at the entrance. Note that there is also the very original solution to skate with rollers the asphalt part of the road (which covers almost all its lenght, until the old cabans), since the valley is very long with little elevation difference... At Polana Trzydniowianska, take the red trail climbing south to Trzydniowianski Wierch, very steep in the forest for a while. Continue to Konczysty Wierch on the border, then Jarząbczy Wierch, and cross the border to walk the two-hundred remaining meters to the top of Jakubina. Return the same way until Trzydniowianski Wierch, and then descend into Jarząbcza Dolina, via the "John Paul II trail" (there is a memorial few km upstream of the refuge). Don't forget to make a stop in Polana Chochołowska, just before the mountain-hut. These wooden huts are a very beautiful example of traditional architecture of the Tatras, some of them are more than 200 years old ! Do not attempt to use them overnight, you will be fined. Enter them only in case of big emergency (storm, etc) * Loop via Dolina Jamnická:
Start from Pribylina campsite (blue trail) by the ascent of Jakubina (green trail), and continue north from the top until Jarząbczy Wierch ("Hruby Vrch" in slovak). Return is made by the descend in the valley Jamnická Dolina. The circuit is best-made in this direction (storms), unless you plan to sleep at Koliba pod Pustým the evening before.

* Loop via Račková Dolina:
Start from Pribylina campsite (blue trail) by the ascent of Jakubina (green trail), and continue north from the top until Jarząbczy Wierch ("Hruby Vrch" in slovak), Konczysty Wierch, and the pass Rackovo Sedlo. Return is made by the descend in the valley Račková Dolina. The circuit is best-made in this direction (storms), unless you plan to sleep at Koliba pod Klinom the evening before.

* Campings :
Camping is strictly forbidden in both National parks TPN (Poland) and TANAP (Slovakia).
However there is one campsite lead by the PZA (Polish alpine club) near the entrance of Chochołowska valley, and 2 or more campsites in the city of Zakopane, and a very good one in Pribylina (Slovakia, Račková Dolina)

Paradoxally, there no official refuge in Slovakia whose location is convenient for Jakubina. The closest and most convenient is the Polish Schronisko na Polanie Chochołowskiej (www.chocholowska.zakopane.pl), in Dolina Chochołowska
This is a big hut and generally finding a place is not too hard. Take duvet and mattress anyway during sunny week ends when there is a lot of people.

* Mountain huts :
On the Slovak side, this part of the Tatras is amongst the less frequented, and has the paricularity to host a certain number of "hiking huts". You will find them mentioned nowhere in official guides for obvious reasons. But using them is tolerated, in the only conditions that:
- You leave it as clean as you found it, or even cleaner
- You share the space tolerantly with other people who might want to share this space with you.
- If some people who look like officials of the Tatras or forestry managers come to tell you not to use it, obey (they have the right to decide whether these huts can be used or not since they depend on the localities in the village belows).

Here are the huts:
- Koliba pod Pustým, which was recently introduced in an SP hut page by Rama. Further description on its page on Hiking.SK. It is located on the blue trail in Jamnická Dolina roughly at the same level horizontally than the top of Baranec.

- Koliba pod Klinom is another very good hut, located in the upper part of the Račková Dolina, at the junction of the yellow and green trails. This hut is very small but the location is very nice, over the tree line contrary to Koliba pod Pustým.

Wołowiec on Wikipedia, in Polish (I translated some of the informations in the overview section) :
http://pl.wikipedia.org/wiki/Jarz%C4%85bczy_Wierch 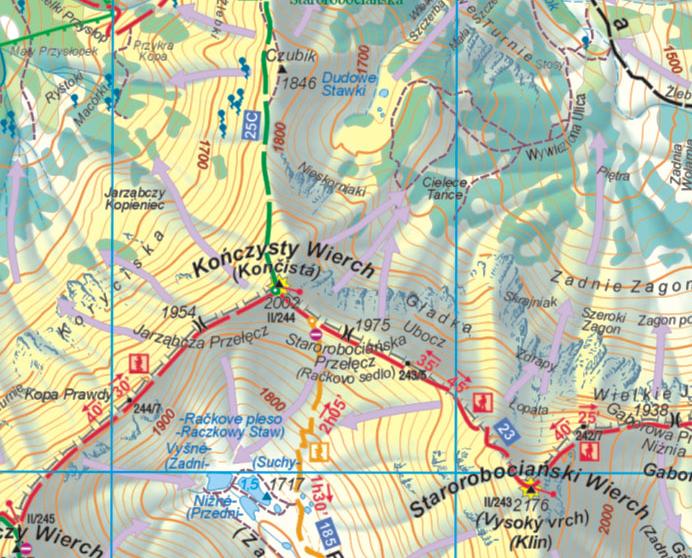