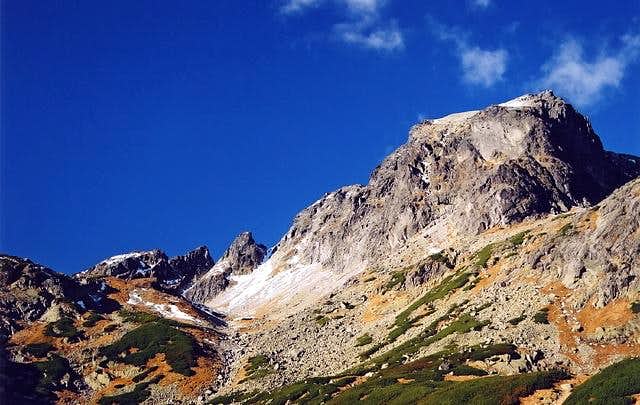 Javorovy Stit over Velka Studena Valley Javorovy Stit(2417) as the highest peak of long Javorova Ridge is a very characteristic object in High Tatra panorama and it is quite easy to recognize it especially when looking from the north side. Just under the main summit of the whole massif there is a great ,sloping rocky plateau undercut from almost all sides by precipitous 250-400 meter high cliffs. The name of the peak comes from Javorova Dolina valley touching it from the north. Granite cliffs of Javorovy and Maly Javorovy were in the second half of 19th and early years of 20th century one of the main stages where the history of Tatra Mountain climbing was being written by such famous names of “taterniks” of that era as Komarnicki brothers ,Stanislawski ,Korosadowicz ,Staszel ,Martin and Swierz. First successful conquering of the north wall of Maly Javorovy made by Hungarian Climbers: Gyula and Roman Komarnicki was a milestone in a history of conquest of extremely difficult High Tatra cliffs. Though not the easiest to ascend for an average mountain tourist - Javorovy offers a wide range of possibilities for all those eager for a top high mountain performance and a shot of adrenaline... The area is popular among experienced climbers and especially in the last years ,by wintertime attracts many enthusiasts of extreme skiing for whom the whole Velka Studena Valley is a real paradise. During summertime and good weather you may meet sometimes single tourists ascending the summit of Javorovy Stit(2417) by the easiest route through Sivy Zlab (Grey Couloir) but You can be sure that You won’t meet a crowd anywhere there even in the high summer season, frankly speaking the Javorovy area is never visited by masses because of lack of marked routes in the massif. The only marked route (blue marks) crossing near Strelecke Polia (Hunters' Fields) is a popular one way route going from Teryho Chata Chalet(2015) in neighbouring Mala Studena Valley through Priecne Sedlo Pass (2352) to Zbojnicka Chata Chalet(1960) in Velka Studena Valley traversing also foots of southern walls of Javorovy Stit . The whole “Javorovy climbing project” usually starts from Stary Smokovec beautiful spa ,ski and mountain tourism centre on Slovak side of Tatra Mountains. You can get there easily by bus or electric train from town of Poprad. Poprad has very good communication links with whole Slovakia, there is also an airport(probably the highest located one in Europe - 710 meters above the sea level). Poprad-Tatry Airport Slovak bus and train connection search Our mountain trip to Javorovy Stit(2417) leads from Stary Smokovec to Hrebienok(1285) and then higher and higher through great Velka Studena Valley . There is a cable railway from the center of Stary Smokovec to Hrebienok (5,70 Euro - one way). 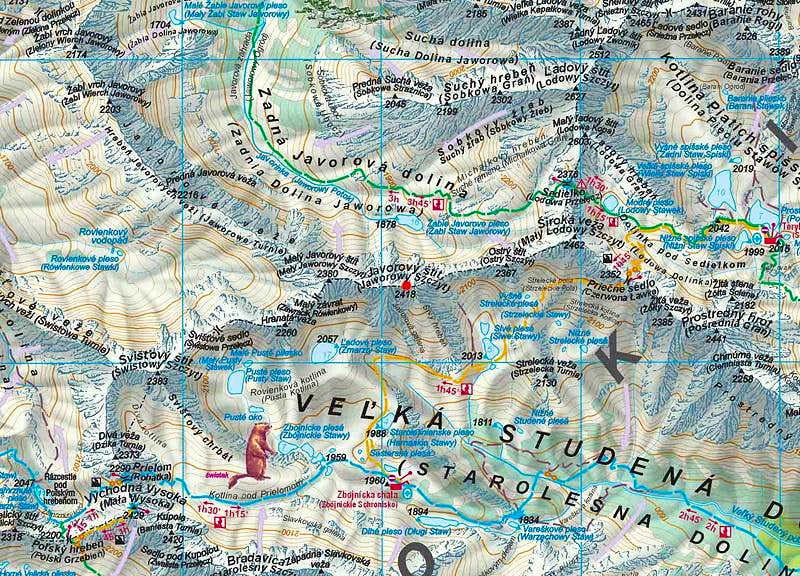 It is Tatra National Park (TANAP) area ,there are no entry fees but You can hike using only marked trails. Many “non-marked” peaks or passes like Javorovy, Ladovy, Gerlach, Lomnica, Mengusovsky Velky or Satan for example - are accessible “legally” with licensed Tatra guides. On 21.12.2007 Slovakia along with Poland signed Schengen Agreement and accessed
to "open borders" Schengen Area, however one must remember that National Park regulations prohibiting crossing the border beside marked trails in the whole area
remain in force.

Definitely the best place to stay overnight when planning climbing Javorovy Stit is beautifully situated Zbojnicka Chata chalet(1960) in Velka Studena Dolina valley. The chalet completely burnt down in June 1998, quickly rebuilt offers now good conditions and great atmosphere. Zbojnicka Chata Chalet You can also try to attack Javorovy Stit from Teryho Chata chalet(2015) in Mala Studena Dolina valley after overcoming Priecne Sedlo Pass(2352) or simply but much longer from the town of Stary Smokovec (whole-day trip). From the north You can achieve Javorove Peaks area by green marked trail leading by the whole legth of Javorova Valley from Tatranska Javorina . Then alternatively you can choose a way of getting to Velka Studena Valley between using quite demanding Javorova Pass (non-marked!) or after reaching Sedielko Pass(2372) crossing Priecne Sedlo Pass(2352) . Camping in Tatra National Park besides a few designated places is strictly forbidden. 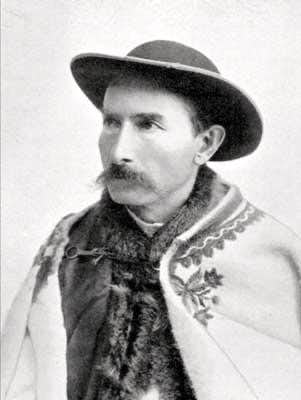 Legendary figure of “King of Tatra Guides” ,”Tatra Eagle” - Klimek Bachleda is especially connected with the area of Javorove Peaks due to memorable event of 1910. On the 6th August 1910 Klimek was killed in a rocky avalanche during one of the most famous TOPR rescue actions ,trying to save life of Stanislaw Szulakiewicz trapped in the cliffs of still unconquered north wall of Maly Javorovy Peak. Not listening to orders of the expedition chief Zaruski and regardless of extremely bad weather conditions Klimek made a daring attempt to get to the sufferer ,sacrificing his own life for helping other man. His heroic deed and death became a legend. Klimek Bachleda is commemorated in Tatras and area in many places for many kinds, among others: big board on the symbolic cemetery of mountain victims under Ostrva in Mengusovska Valley and names of Klimkowa Przelecz (Klimek’s Pass) under the summit of Pysny Peak(2623) and Klimkowa Turnia (Klimek’s Crag) – the highest one of four summits of Bradavica(2476) ,which was cilmbed first by him in 1892 ,Klimkowe Wrotka and Klimkowy Zleb also in the area. Legendary person was frequently mentioned in Polish Tatra poetry and literature.