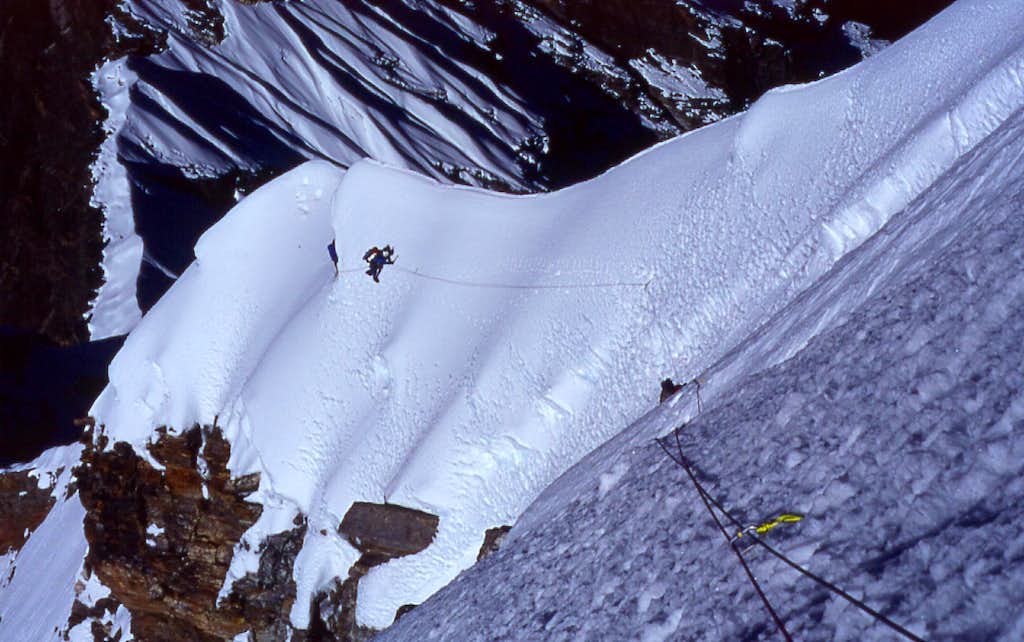 GOD that is freakin nuts. I think I may have soiled myself just looking at this picture. GREAT PHOTO!!!, it really shows how difficult this climb is.

Parts of the ascent certainally scared me! All in all, though, the trip was one of the best experiences in my life, so I couldn't help but recommend it.

Amazing photo, looks like a really interesting objective. Out of interest what alpine grade do you think the SW ridge would be and is it the easiest on the mountain? Thanks

I think that the SW ridge is the easiest on the mountain. The ridge to the left of it has also been climbed quite a bit but has a longer steep/vertical section at it's top as you reach the mellower summit slopes. I also heard that melting in recent years has made that route difficult and/or unwise.

I think that the SW ridge route's difficulty varies considerably depending on the season. When we climbed it, the climb was nearly all snow but might have had a rating of Alpine Ice 3 and a grade of V or maybe VI. It was similar in nature to the Liberty Ridge on Rainer but 7,000 feet higher in elevation. In the spring, much of the snow that we encountered is ice according to the article by Galen Rowell detailing it's first ascent, and the difficulty more substantial. In recent years, there is the addition of poorly protected rockclimbing to the summit of the tower low on the ridge. I think that it's about 5.8 but it was all snow when we were there. Supposedly, there are often fixed ropes over this part but obviously you couldn't count on them.

As for quality, the route is outstanding, with the most spectacular summit that I've ever visited. This picture is showing the crux of the route, at least as it was in 1993. In the trip report, there is a view of the identical section of the ridge looking up...

The picture shows the crux section of the route (at least it was in 1993). It was wonderful...