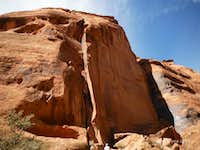 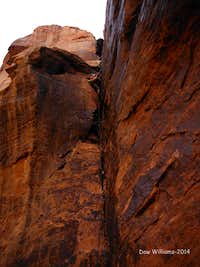 Highlander, 5.10d
Two of the better trad routes in Snow Canyon State Park are located in Johnson Canyon. Both are Ron Olevsky routes and neither are in Todd Goss’s local guide book. Todd is a sport climber and did not do a very good job of including trad routes in his book. Few have climbed these routes but they are both in great shape in terms of offering clean rock and with solid rap anchors. The obvious one is named Highlander (5.10d) and is the single pitch that ascends the popular guided canyon descent at the dead end of Johnson Canyon. On most weekends during good weather and an open trail (raptor closures), there is always a chance of a tourist rapping over you (yes, this has happened to me).  However, during the week, it will almost certainly be all yours.  An even better route is Trouble No More (5.10b). This is a two pitch route located directly across from the Johnson Arch itself. There is a rap station above a third pitch, but it is not recommended.  I cannot recommend the other two routes with established raps in the canyon.   One is an obvious crack comprised of horrible rock (unnamed, 5.10) located on the south face of the west buttress at the entrance to the canyon. I have climbed this a few times and the rock gets worse not better. Another unnamed route is located to the left of Trouble No More and has an R/X start to it (photo). If bolting were ever allowed to get you started on this route, it could be quite a line!

Park at the parking lot on the west side of Snow Canyon Drive before the park kiosk at the south entrance. Hike the short, scenic and popular Johnson Canyon Arch trail. Highlander is located at the very end of the trail in the obvious black varnished corner.

Routes Listed As you Approach them on the Trail