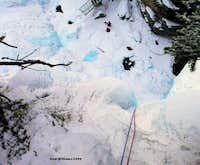 Instead of doing individual route pages, I am going to combine the three main routes at the end of Johnston Canyon. Johnston Canyon is as close to an area of “sporting ice” as the Canadian Rockies offer. Your approach consists of a tourist trail (approximately 3kms) of sorts, where certain tour guides offer “ice walks” during the winter, thus keeping the paved trail clear of snow, albeit making it somewhat slick. Spectators can trek out on a cat walk to photograph the climbers, thus are actually guided on this walk for such purpose during winter weekends. All this being said, on a cold January Sunday, we and two other climbing parties had the place to ourselves for climbing purposes; outside of making the occasional photographer’s delight.

The best lines are the two just off to the left of the cat walk. The further left is the more precarious ice and does not last as long as the piece to the right. Both are quite vertical and sustained with the left route offering the most technical move in January, 2008, a transfer from the main pillar to an overhanging and fragile curtain above for the finish. The right side route was more sustained and thus physical offering little in the way of breaks. Both were a ton of fun. We both thought they were in the WI 4 range, some call them WI 5’s. Most folks climb the easier angled ice to the right to gain trees above the canyon so they can top rope these two more difficult routes. A 70m rope is needed to top rope both of these longer routes. If you stay climbers left on this approach ice, you will find several sustained WI 3 lines. If you want to just solo up this section or are a beginner, you can keep circumventing to the right to ascend WI 2 ice.

Two Ice Tools, Double 70 meter Ropes (allows you to top rope and rappel at the end of the day), 12 Ice Screws with draws and/or screamers, Crampons, Helmet, Warm Clothes (not much sun), Full Shank Boots, Gaiters