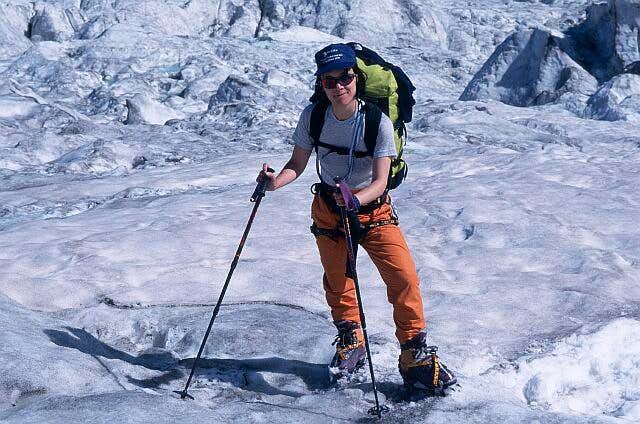 I see what you meant about getting slammed by some coward who apparently can't stand to see a woman in such a place. I tried to raise it up with a 4-star vote, but it wasn't very effective. Now I'm sure that whoever it was will probably start slamming my photos, if he hasn't already.

sorry that I have a little different opinion about this picture. It is of course a nice portrait of Rahel. But there is no information at all transmitted by the picture. If it deserves one or max. two stars then only because it is nicer to look at women then at men ;-).

Rahel's questions about the votes did not mean this picture.

this is exactly the reason, why I submitted it, because it is probably the best "alpine" photo of myself I have. I was thinking whether I should put it on my profile page. But because of the sun glasses I did not. Then I did not know what to do with it .... so I just added it. I would also have voted like you. But nevertheless has Bob a correct point in general .... ;o) (read above).

I think, in general you got a point .... I guess this is at least one of the main reasons, the sexistic one.

Thanks for raising it!! In general, I would have voted on this photo (as I do it on similar photos of others) like Mathias. But sometimes, I vote in the same manner: if I think that a photos has much too few stars, I give 4 in order to raise it although I think it's worth only 3 stars or even less. I gave, for example, a 1/2 star photo 4 stars only in order to raise it.

Thanks for your help! ;o)

I think I see what you're saying Mathias, but I wouldn't say there is no information transmitted. ;-) True, there is no information about the mountain or the surrounding terrain, but there's good information about a person in a very desirable place. Maybe I vote differently than most members. I vote on the photograph, not on how much information I get from it. If someone posts a still life of a table with some fruit in a bowl or something, that would get a zero vote from me for being off subject. But this is a good portrait of a mountaineer doing her thing, so to me it is definitely on subject and deserves good marks. :-)

Loading....
Great glaciers in the Area of Mont Blanc(Album)