JP on top of Blodgett Peak... 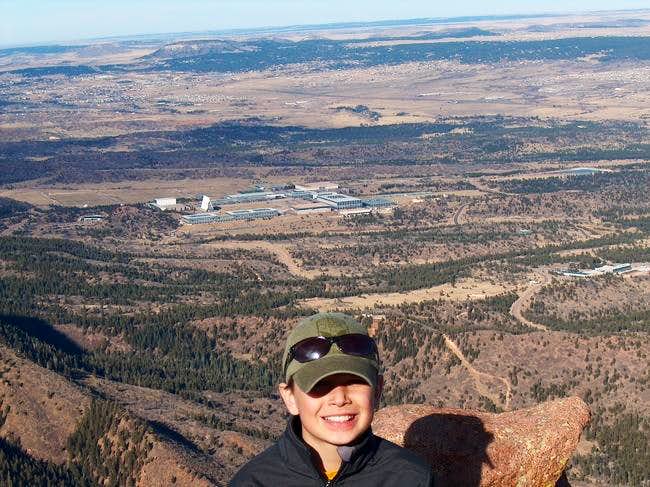 JP on top of Blodgett Peak with the United States Air Force Academy behind him, 1/23/05.
« PREV NEXT »

I am trying to determine the orientation here, but is Blodgett Peak the peak that had squadron stuff painted on it last year? It looks like it might be. You might have been voted down because you cropped your son so tight...but it is obvious you had to to get USAFA in the background. It gets 4 stars here. My second home is just outside the North Gate... I dont think it made the picture. But it is a great shot of your son, USAFA and Black Forest. And by the way... I graduated from USAFA... and next time I am up there I would be honored to buy YOU and Marine a beer or whatever you drink.

Thanks! Blodgett is the most prominent peak in the hills that run north of the Springs. I have a great view of it from my back deck in the southwest part of town. I did not hear anything about graffiti on it last year, but then again, I just moved here last May. There is the wreckage of a small plane on the other side of the peak closer to the Academy. The sun played hell with my pics that day. I could not get anything good of Pikes, Almalgre, Rosa,... because the sun was starting to go down. Still, it was a great January day to climb in t-shirts.

By the way, it looks like The Marine lives up in Greeley, but I'll still take you up on the beer. Fat Tire rules!

As a current cadet, I can clear up the 'graffiti' story somewhat. I'm not sure if it is labeled on any USGS quads or not, but cadets refer to it as Eagle's Peak, the prominent rock face and peak basically due west of the cadet area. Blodgett Peak is the next significant peak south along the same ridge line. A member of the Class of '04 climbed and then rappelled down the face with paint and painted his class year. The last that I heard is that he faced December late grad and had to cover the expense of hiring a cleaner to restore the face (though its still visible).

As far as Eagle's Peak is concerned, the rock face is off limits to cadets in terms of climbing and rappelling, but we all use a trail (not a good one) that climbs the gully to the north of the peak. It then crosses the gully and climbs the nw ridge to the summit. I would say its class 2 and about 2 hours to the summit for most. Provided you can get on base, which you currently can if you go through North Gate, it is publicly accessible. Once I return from my semester exchange, I plan to make a new mountain page for it. Thanks and let me know if you have any questions. -Kyle.

Plodding Up and Sliding Down Blodgett Peak with JP(Trip Report)