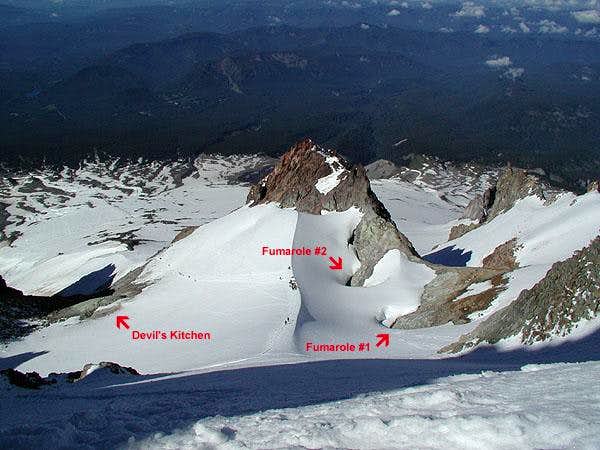 July 01, 2001 Mount Hood Climbing Accident (part 2): This is the view looking south from below the PearIy Gates taken just before the accident. Notice how much of the route is in the sun now. With a 13,000' freezing level during the night, soft snow was partially blamed for the accident. I think everyone on the Hogsback with a view held their breath for a moment when the climber disappeared into Fumarole #1. Many were hoping that he would self-arrest, but having lost his axe and gaining a high speed of descent he was almost certainly going to end up in Fumarole #1 or #2. According to the USDA FS climbing ranger, climbers that fall into Fumarole #2 typically die from being burned and asphyxiated. Rescues are not recommended in Fumarole #2 without an oxygen mask and then it is usually to retrieve a body. There was also an incident where two would-be rescuers, without oxygen masks, ended up dying from asphyxiation in Fumarole #2. More commonly, however, climbers fall east into Devil's Kitchen, the last one being on March 23, 2001. Accident Photo Sequence: [ 1 | 2 | 3 | 4 ]
« PREV NEXT »

What typically happens if

you fall into Devil's Kitchen or Fumarole #1?