Summer 1939 (1): a rope party of alpine soldiers composed by Lt. Giovanni da Lago, Officer Cadet Federico Busancano and two non-commissioned officers, Antonio Furlano and Mario Briasco, joined the summit of Punta Patri on Grand Paradis massif. It was an ordinary drilling ascent along a mid difficult mixed line; just few days before the whole battalion “Duca degli Abruzzi” where was enlisted these soldiers crossed Gran Paradiso (m 4061) during a night without any problem. The day was sunny and quite hot; after the lunch they started the descent; probably noticing the melting snow and a possible risk due to cornices Lt. Da Lago decided to rope up all his soldiers in a single rope party hoping to increase the security of the progression.

A rescue team, alerted from the no-return of the soldiers, arrived only two days after at the top of Punta Patri: some empty boxes and leftovers leaded them along the opposite snowy ridge: after few steps only the traces of a desperate tentative performed by the commander officer to stop the fatal slipping of their comrades, and nothing else then the wind and the void space……… 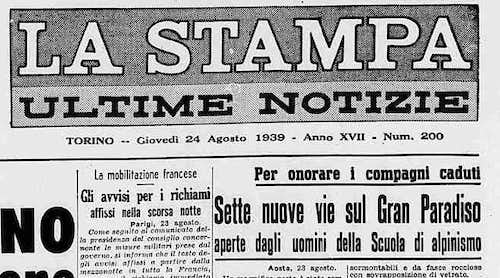 This mountain accident aroused great interest, particularly on the mountaineering environments; the willing to honour the memory of the young cadets started a sort of “competition” among the best climbing specialists of “Scuola Militare Centrale di Alpinismo” to open some new routes on Gran Paradiso massif; the result is seven lines (one rock, three ice and the others mixed) in a same summer! (2)

In the years 1938-1939 the Gran Paradiso massif become the preferred drilling environment for the specialised alpine soldiers of “Scuola Militare Centrale di Alpinismo”; it was not too far form the headquarter of Aosta and the general condition of the mountain were most favourable then other mountain groups like f.e. Mont Blanc.
That day, at the appointment with the unclimbed vertical South-west face of Becca di Moncorvè, arrived the rope party of Lt. Mario Borgarello with Corporal Arno da Monte and the alpine soldier Luigi Notdufter. They are “no-local” climber, arrived from Trentino Alto Adige with a great experience of high difficult climb on Dolomites. The chance to do military service in Aosta let them to join the “Alpieri” company: the best excellence of mountaineering in the period.
The official report of Lt. Borgarello (3) describes the new route in a romanticized way, and this will cause some problems few years later……

“We joined the bottom of the wall from the glacier after 40 minutes of frozen snow and rocks. The point of attack is in the centre of the spur which, beginning from the snow shroud, ends to a crystalline rock barrier.

I climb up on the shoulders of my second (on the rope) to get over the first two meters vertical and without holds. Afterwards there are 80 meters of IV degree, but the face over us is a vertical uncertainty. We reached a 2-meters dip: there’s a quartz barrier cold and very stable, then I come up for few meters and I put the first screw belay. The holds are big so we can continue to wear gloves. It’s cold and although it was after 9,30 a.m. I have my fingers aching; it’s impossible to climb with gloves. I go on straight across the first difficult sequences and I join a dihedral that continues on my right and become an hairline crack. I climb it; the exit is a bit overhanging. My comrades arrive and we take in the rucksacks.

Here the difficulties increase; the wall, quite vertical, is interrupted from some cracks. I can get over in layback quite quickly along the smooth edges, putting only screws belay. The hammer isn’t in my way because hangs down two or three spans outside. The rucksacks hinder the climb, but they are necessary; unfortunately we loose the water flask so for two days we will have some problems for drink!

Only 50 meters to reach a sort of ledge we’ve seen from the bottom, we continue straight up a large overhang that I think impossible to climb. On the right the smooth rock is interrupted by a 2-3 cm little crack for 1,50 meters of length. I’m belayed on a peg; after a little move I manage to nail a knife-blade peg, meanwhile with a jam-foot on the crack and the hands on the karabiner I can continue carefully the traverse. My fingers detected a little hold on the right just behind the rib; I move my foot trying to put them in touch with the rock entrusting my body’s weight to the hold: I get over! Very beautiful sequence! I feel calm so I can continue vertically ahead entering in a sort of large chimney with a locked cubic block on it. Paying attention to the moving block I can finally join the ledge. I had to continue up to here because if not I wouldn’t able to belay efficiently my comrades.

It’s 1,30 p.m.; we eat some chocolate; the wall upon us is overhanging; I try a sequence on the left, under a roof but I have to return. I continue on the right with an exposed traverse (1 peg left); after 3 meters I can reach a little edge and make a pulley for the rucksacks.
Here starts a 60-meters dihedral; the left side is overhanging, the right one ends with a roof; in the upper part the dihedral is overhanging too. This crux will climbed by me and my second on the rope with 7 pegs and 2 aiders after 4 hours of “working”; the third, because the night, will have to set up a bivouac in the mid-dihedral. 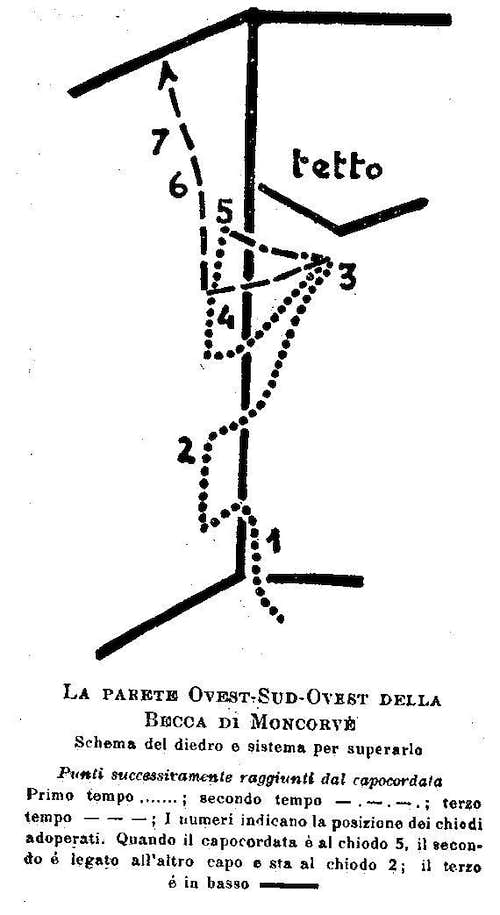 The second (on the rope) nailed a screw ice; with its aid I can continue into the internal crack of the dihedral for few meters. After getting over a difficult sequence by an aider I can continue up to the bottom of the roof. Here I peg another pin; with a little descent movement I can get over the first belay; I nail a second pin and with a layback movement I retrieved the karabiner in order to unblock the rope. I continue my climb just under the exit of the roof; heaving up on two pegs I put an aider and pushing my face under a smooth rock block I can jam my shoulders on a large crack. I pick an hold finger on the rib and after few meters I join a ledge.
It’s about 10 p.m.; I set up a belay with 2 pegs and the second on the rope arrives with the bivy bags; the third (on the rope) is anchored on a fixed rope; a second rope, tied on the feet of the second is useful as a sort of “telephone”….

The night is starry and cold; at 4.00 am we take in the third; he clean all the pegs except one of mine and the one he used to belay during the night: three of them under the roof are very difficult to extract because were used in my traverse and now the rope hangs on the vertical. At 9,00 am we leave again; the sun isn’t arrived yet. I continue ahead; around me only vertical spurs that sink into the empty space. On the left there are some impressive overhangs that end on a barrier of roofs, we bordered them on the right. I get over without pegs a difficult sequence on broken rocks; then another difficulty on smooth and cold rock up a sort of slab looking like a table. Now we are under the impassable roofs; with an easy traverse on easy steps we join a rubble ledge and finally the dip 20 meters below the summit. After wearing our mountaineering boots we join the top.
We started the route at 8,30 am on the 6th, July, we climbed until 10 p.m. The 7th, July we climbed from 9.00 am to 2 pm.

Our gear: 31 pegs and ice screws, 20 karabiners, three rock hammers, a 50-meters rope, two 25-meters ropes and three bivy bags.
I used 30 pegs, leaving 12; 4 of them out of route.
The grade: from the attack point to the first rib IV degree; from this rib to the first ledge V and VI degree; from the first to the second ledge VI degree, then IV and V degree.
18 hours of effective climbing.
This is a “super direct” line, my overall grade is about V+” 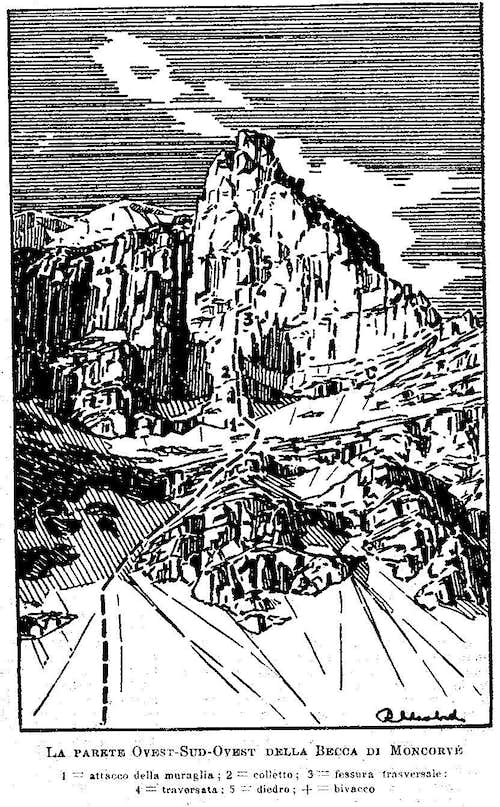 Where credit is due!

We have to wait until 1945 for a claimed first repetition of the route, but there’s a real mystery about when it did. An almost-unknown young climber of Turin, Leopoldo Saletti, describing some new routes he opened in 1940 with the mountaineering team of GIL notices: ”gli appicchi del versante meridionale della Becca di Montcorvè da noi ripercorsi (the vertical walls on south face of Becca di Moncorvé we’ve repeated)” (5).

The adventurous topo of Lt. Borgarello deceived also other climbers of Turin, Cesare Barbi and Mario Salasco, who tried a repetition of the original route on 8th-9th September, 1954. But in this case there is less mystery: they published a more detailed report (6) but there are some differences about the sequences particularly on the middle section of the wall. Their climb nowadays is considered as the “standard” direct of South-west face.

To put order in this universe of repetitions and variations luckily arrived a famous mountaineer, Ugo Manera, academic member of Italian Alpine Club and author of about 50 new routes on the Western Alps. He repeated exactly the line followed by Barbi and Salasco in first winter ascent (21-22 December, 1974) and in his article (7) he writes: “Concerning Borgarello it’s a good thing to remark that with the climb of the big dihedral (those of 60 meters) he made a very big exploit for the period, because this dihedral, nowadays too equipped, during the first ascent isn’t less difficult and continuous than the two famous dihedrals on Ratti-Vitali route of the Aiguille Noire de Peuterey so well described from the mountaineering literature on the past".

The destiny has decided to link the ability of alpine soldiers to this beautiful and lone wall: 32 years after the “Alpieri” another party of the new “Scuola Militare Alpina” will open his “super-direct” (8); the last act of the Moncorvé extreme rock!

(1) The exact date of this accident is not easy to find.
The famous newspaper “La Stampa” published a first note on 13th July, 1939; then a bit more complete article the day after: here the journalist noted down that the fatal climb started on Tuesday 11th. Probably the high command of “Scuola Militare Centrale di Alpinismo” has kept the secret about the circumstances; an hint about the night traverse of Gran Paradiso performed by batallion “Duca degli Abruzzi” (La Stampa, Giovedì 24 Agosto 1939) probably moves the date toward the end of June.
Ref.: “Tragica sciagura sul Gran Paradiso”. La Stampa, Venerdì 14 Luglio 1939.

The grade, with modern gear, is comprised between III and V UIAA (except for the Moncorvé); we have to consider that some of these lines are now impassable cause the climate changes and the reduction of permafrost and glaciers.

(8) Gianni Bonetti and Norbert Gasser with the military mountaineering guide Fausto Lorenzi, 29th August, 1971; the route is graded ED with some A2; nowadays has about 15 repetitions and may be climbed free (6b+). Very little gear in place.