Thursday, May 26th
After plunking down a cool $62 each for tickets, Allison and I loaded our backpacking gear and snowboards into the Durango & Silverton Narrow Gauge Railroad train for the 9 a.m. departure from Durango. We would ride the train for about two and a half hours to the Needleton stop and begin the roughly 6-mile and 2,800 vertical gain hike into a high camp around 11,000 feet in Chicago Basin. 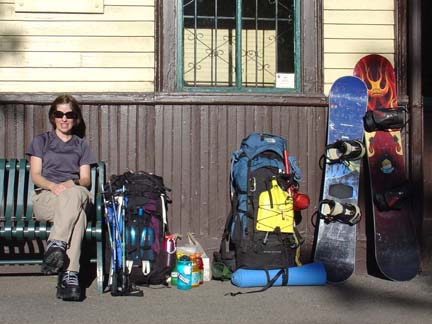 Allison waits in front of the train station in Durango for our train to begin loading.

After an enjoyable train ride along the flooding Animas River, we were the only passengers to exit the train at Needleton around 11:30am and began hiking around noon. We signed in at the Needle Creek trail register and, to our surprise, noticed we'd likely be the only hikers in the basin as no one else was signed in. Memorial Day weekend and we were the only people!? I had been up in Chicago Basin on Memorial Day weekend in 2001 and there was quite a crowd so this was surprising. 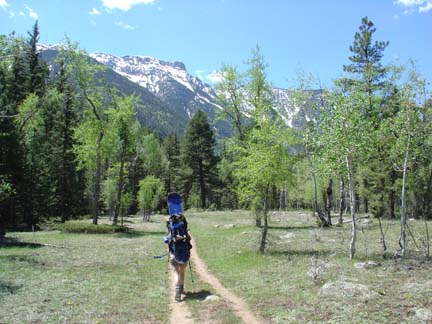 Shouldering the heavy, snowboard-clad packs was tough but with the snowy mountains beckoning, we were inspired.

The solitude on the hike in was short lived though when we met three skiers hiking out around 3pm. They told us of great snow climbing and skiing, solitude (they were the only folks up there), and psycho rabbits. Psycho rabbits? Yes, for their last night in the basin they camped lower, at 10,900 feet, instead of up at 11,600 feet where they had camped the rest of the time. Apparently numerous rabbits invaded their camp during the night nibbling at their bivy sacks and other gear as they tried to sleep. As a consequence they only got a couple hours of sleep maximum. I had heared of curious marmots and mountain goats in Chicago Basin but this was new one to me. We thanked them for the information and finished our hike to a camp at, yep, you guessed it, 10,900 feet 5:30pm. We were bushed at that time and didn't want to carry our heavy packs any higher. We setup camp, ate, packed for the next day and settled into the tent to sleep.

THUMP! "What was that?", Allison and I asked each other. I looked at my watch, it was 10:30pm. I donned my headlamp and poked my head out of the tent. To my surprise I saw six pairs of red eyes looking back at me. Damn, it was the Psycho Rabbits! I made some loud noises but they didn't stir. I settled back into my sleeping bag and closed my eyes. A chewing sound opened my eyes moments later. I again looked outside. One of the rabbits had been chewing on my foam sitting pad that was stowed in tent's vestibule. Crap. Thankfully we had our food and backpacks hanging already so I pulled the pad inside the tent and tried to sleep some more. Moments later, it sounded like one of the rabbits jumped onto the tent and bounced off! Then, chewing noises from near my feet. I kicked hard at the tent wall and closed my eyes again. And yet, more chewing noises--this time from near my head at the corner of the tent. I smacked the tent wall with my hand. This was going to be a long night and I was dreading it. Rabbits chewing on anything and everything. Allsion and I discussed the situation and our options. We'd try to suffer through this night and move camp higher the next day. As we talked, we noticed the rabbits didn't seem to bother us as much. Hmmm...So I turned on the small FM radio I had carried in to the only station we could receive, 'Farmington's Rock Station, 92.9 The Crown', and set the radio in the vestibule. We'd have to sleep off and on to the likes of AC/DC, Metallica and The Offspring for the rest of the night. This tactic worked with limited success but afforded us at least some sleep.

Friday, May 27th
We awoke at 4am, one hour earlier than planned. But don't get me wrong. When I say we awoke, that's really as misnomer as we barely slept a total of two hours that night thanks to the repeated interruptions by the rabbits. I surveyed the camp and noticed the rabbits had chewed on our snowboard bindings a bit as well as put some good bite marks in my foam pad. Those bastards! We packed up camp and moved up to a nice level pile of very old avalanche debris snow at 11,600' above the small headwall between 11,000' and 11,600'. Our hope was that the rabbits wouldn't bother us up there. We setup camp and began our ascent of the Eolus mounts around 8am.
When Allison and I began planning this trip we knew the snow climbing might be a bit much for her at this stage in her mountaineering career but with her being a very strong snowboarder, I knew that if we could get up the snow, she'd have no problem getting down! We broke out the crampons and ice axes at around 12,500 in the basin southeast of South Mount Eolus and kicked steps in the soft snow to the small saddle on the ridge between South Mount Eolus and North Mount Eolus. Allison didn't want to summit North Mount Eolus so she waited at the saddle while I summitted N. Mount Eolus and returned down to her. From this vantage, I had good view of Jupiter's north face although I couldn't see the Io Couloir that I planned to climb later. 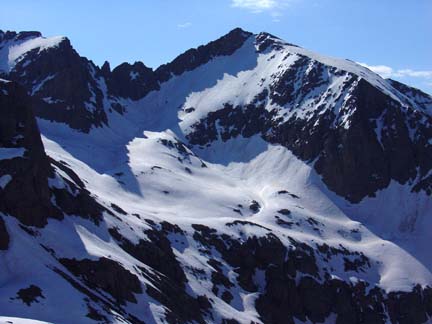 Jupiter's north face from near the summit of N. Mount Eolus.

As Allison waited, she had had time to inspect the ridge to S. Mount Eolus and was skeptical. Frankly, with the snow covering the catwalk and most all of the ledges on the east face, I was a bit intimidated too. So we began the ridge but only got about 10 minutes into it before deciding to turn around. It was an easy decision. We were tired, I had been on the summit three times prior and Allison was fine with coming back at a later date. Besides, the nice spring corn snowboard descent was calling our names! We hiked back to the boards, I watched Allison make some great turns down with Sunlight and Windom Peaks as her back drop and then followed her down. It was a great run down and we were able to follow a snow finger all the way back to our tent. Ski in, ski out lodging!

Saturday, May 28th
We awoke at 5am after a much more peaceful night of sleep with only a couple of brief visits from a curious marmot during the night. We hoped to summit Sunlight and Windom Peaks this day. A little after 6am we were ascending towards Twin Lakes and soon passed them by. Again we donned crampons and ice axes around 12,600 and set our sights on the Red Couloir route (standard route) on Sunlight Peak. The snow was in great shape and we cramponed up the slope to some rocks around 13,300. There Allison decided she wanted the security of the 30m, 8mm rope we brought along. To save weight we had carried enough webbing for a diaper sling each along with a locking carabiner. We slinged up, tied up and started up some more. However, the frozen snow was a bit too solid and unforgiving for Allison so after some discussion we opted to turn back. I gave Allison a couple of rope-length boot/ax belays as she down-climbed the snow back to the rocks where we had roped up. Despite turning around, I was proud of her. She had gotten scared when we first roped-up but had pushed through her fear and continued climbing for another couple hundred vertical feet before turning back. Progress was being made! However, she didn't feel like giving Windom a shot so we sat around a bit waiting for the snow to soften and then made turns all the way back down to our tent. Fun! The rest of the afternoon was spent reading and napping. A very relaxing vacation!

Sunday, May 29th I awoke at 5am to climb Jupiter Mountain while Allison would sleep in a bit, hike up to 12,600 below Eolus and make some snowboard turns. I set off at 6am. The snow had frozen nicely overnight so with crampons on the going was fast and smooth. I followed snow ramps and lines through some scattered rock bands into the small basin below Jupiter's north side. I reached the 13,000-foot level at 7am and was pleased with my 1,400 vertical feet/hour rate. I was still having trouble seeing where the "moon couloirs" were but I guessed that was because this was an above-average snow year and the couloirs themselves weren't too defined. Looking at the face I could see where the Callisto, Ganymede and Europa lines would likely be. I could also see a small notch in the rocks where I was guessing the Io Couloir was hiding. 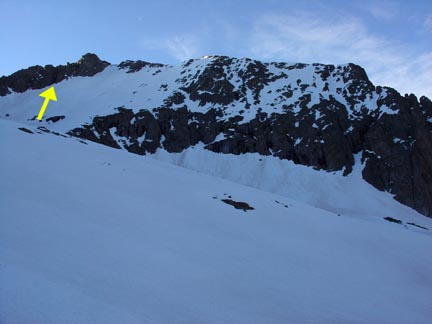 The Io Couloir location is shown with the yellow arrow. It's very hard to see until you are right below it.

I worked my way east with a ascending traverse to 13,400' where I could finally see up into the Io. And it looked awesome! A perfect split in the rocks with great snow in it. I was excited to get up in there. 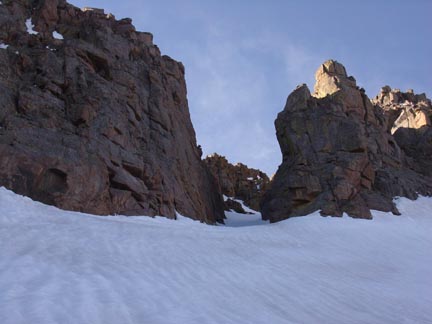 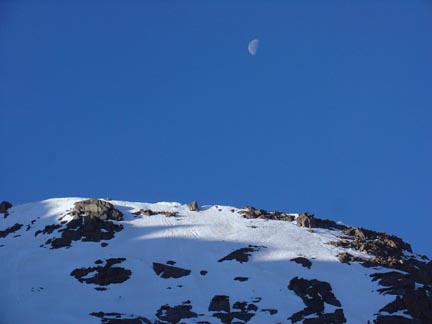 I entered this narrow couloir kicking shallow steps into good snow with the occasional patch of hard ice. This route was already becoming a favorite of mine. Narrow rock walls, good, steep snow and the promise of a top-out right at the summit! 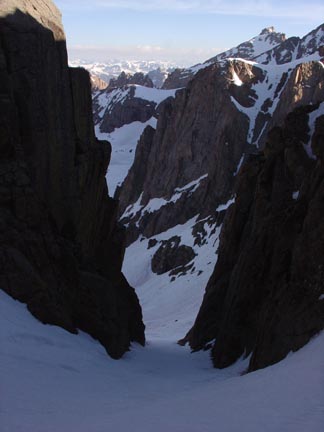 The view behind me out of the couloir at Sunlight Peak and rest of the San Juans was wonderful.

I gleefully continued up to a small rock band in the couloir around 13,750'. Before tackling the short rock section, I took another look down at this fantastic route. 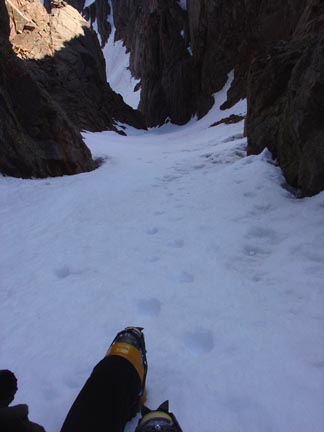 The short section of rock didn't prove difficult and beyond the rocks was another 25 feet of snow climbing to the top. As I crested the snow, I wondered how close I'd be to the summit. I popped out of the couloir to an awesome view to the south and only 20 feet east of the summit! Just an awesome route with a direct finish to the summit. It was 8am and I had a commanding view of the Weminuche all around.

The Eolus Peaks, Sunlight and Windom from the summit of Jupiter.

I could see Allison making her way up the basin below Eolus. The morning was still and perfect so I sat around for about 30 minutes hoping the snow would soften up a bit for my snowboard descent of Jupiter's southwest slopes. Unfortunately, I knew the snow would take considerably longer to soften so I sucked it up and began the short scramble to Jupiter's 13,780' false summit. By 9am I was strapped in and began the very chattery survival riding down. While the riding sucked, it sure beat hiking down and I was back at camp by 9:30am.
We packed up, hiked out, left a note at the trail register about the Psycho Rabbits and enjoyed a couple of margaritas on the afternoon train ride back into Durango.
Written by Jason Halladay on 30 May 2005.