Kaindlgrat - A Poetry In White

One should go on Grosses Wiesbachhorn early in summer, when the white poetry of its summit ridge is not yet transformed into a heap of rocks. For the weekend, after a front passing, a weather clearing is promised, but when we drive from Slovenia through a still rainy Austria, we are horrified, observing summits of Hohe Tauern, heavily covered with fresh snow. My Jasmina clearly said that she had enough repeating unsuccessful summit ascents, so on the already hard enough tour also the »now or never« burden loads. After passing Katschberg and Obertauern in rain the old town Radstadt offers us a patch of blue sky and a good Turkish coffee in a restaurant. By busy roads we drive on to Kaprun.

Are We Going Up With A Tractor? 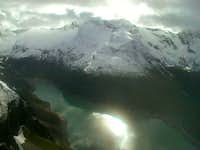 Suddenly we are in hurry again; from the parking lot the last bus departs in half an hour. We quickly throw everything in fast growing backpacks and we are already hugging our ice picks in a crowded bus in order to prevent bloodshed of innocent tourists. »This bus goes up, does it?«, I ask my neighbour just in case. After the first drive we descend on a funny ramp. »Shall we continue with a tractor?« Miran is joking, seeing a machine on a plateau. But then we realise that also we must step on the plateau, because that is the 'cable car'. On top of a steep slope we switch again on a bus, which finally brings us to the upper lake, on 2000 meters of altitude. Now what? All summits are in clouds and what is below them is heavily under snow. High above, on the rocks below Fochezkopf, there's the Heinrich-Schwaiger-Haus on 2800 meters. We don't have any choice. One group of mountaineers already departed and we follow. Two giant dams are closing the Kaprun valley. On the upper lake a lonely kayak sportier is exercising in front of wild glaciers. On the other side of the dam we can read on tables that the water from these lakes is transferred through the whole mountain group into the valley below Grossglockner, where power stations are. Then we rush up the steep slope. Soon the path is covered with snow, but we have trails and where the path goes over steep slabs, there are also cables. When Jasmina realises that a guy and a younger lady are catching up, she by the old habit speeds up, so we reach the hut only 5 minutes after Jure, who is still more fit, starting his young alpinist career. All in all we needed 1:25 h.

She Would Sleep Outside 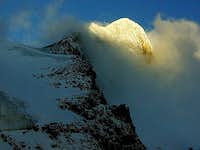 Soon we are all in front of the hut, our friends had already reserved beds, only Jasmina is still persisting that we shall sleep in a tent outside. We indeed carry a tent and sleeping bags with us. But some flat space is only near the hut. Those 30 cm of new snow is cleaned only among tables on the terrace, but her intent is still firm. It gets cold and we move into the hut. When Jasmina tells her intents to the hut master, he of course immediately replies that we are in the central zone of the national park, where such intents are penalised with 500 Asch. After she heard such a strong argument, I am of course allowed to settle everything for sleeping in the hut.

I Forgot A Rope Again 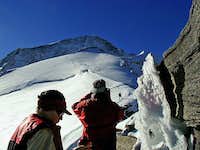 It's so peaceful in rooms, that in the morning we don't hurry at all, despite a perfect weather. The entry chimney will be at least half a day in a shadow. On Saturday two Slovenians climbed over there. Higher on the ridge, they trudged a fresh snow till the altitude of 3100 meters and then turned in a dense fog. Today only Stefan joins, his colleague has badly inflammated eyes. I forgot (again) rope at home, so Stefan, Jure and myself will go unroped and Miran will take care for the two ladies. After the party in front of us disappears behind the edge, we enter the almost vertical chimney. On steps and pegs there's a lot of ice, because snow was melting yesterday, today even the nice, thick steel fixed rope is covered with ice. We reach the top of the chimney and rest a bit. The steep, rocky slope above is still quite covered wit snow, but many continued without crampons. I rather take time and fix them well, as I shall not remove them more than half of the day. Soon I catch up our party, one more steep rocky part and we already reach the famous Kaindlgrat.

A Poetry In White 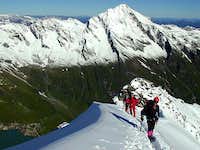 Heaven! Tis is a pure poetry! Warm sun, sharp snowy ridge, not too steep, going in a beautiful arc towards the summit of Grosses Wiesbachhorn. Immediately we are in the best mood. Like over a heaven's ladder we are ascending in a steady pace, there's also enough time for photographing and sightseeing. Gaining altitude, well known mountain groups are rising on all sides. On Weilinger Scharte the beautiful ridge ends on the plateau, from which the last 200 meters of Wiesbachhorn's peak are rising. Now a strong wind already blows from the North. Mira is more and more tired and we slow down significantly. Jure and Stefan are already far ahead, finally Miran suggests that also Jasmina unropes. Mira plans to return as soon as Jure will come down to accompany her. We are encouraging them not to wait on one place, but rather climb up pacefully until Jure is back. Now with Jasmina we start the summit ascent. We have very steep slopes, covered with snow, on some places also polished slabs. Where the climb goes above the north face, the route is also quite exposed. No chances here for correcting mistakes, so I'm angry forgetting that rope at home. Also I'm more than the last half an hour feeling a big pressure in my intestine, the feeling is more and more like all the shit down there is going directly into my blood. Makes me almost sick, but here, on this narrow ridge, I have nowhere to go. There are other mountaineers, so I keep struggling up. Every now and then we look down and are happy to realise that Mira still keeps going up. Of our team Jure comes down first, saying that we are almost on the peak, then the shining face of Stefan comes and in a minute we spot in front also the summit cross. What a nice summit! And in what a nice weather we did it! 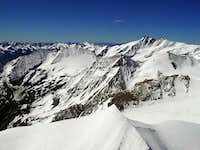 The panorama is boundless. To a girl and boy from Bavaria we are showing far in the distance our Julian Alps with Triglav, in return, they are showing us Zugspitze far on the other side. Watzmann and Dachstein are considered almost as close neighbourhood, so many peaks are boiling everywhere. And on the South and West there are glaciers of Hohe Tauern, with Grossglockner and Grossvenediger as the two most prominent peaks. Despite the wind and my 'inner' troubles we take time to enjoy the panorama. 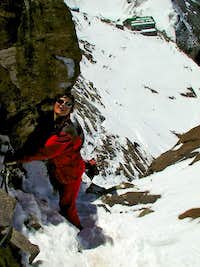 The first part of the descent will keep us busy. As usual, we shall need to be more careful as on the ascent. Close below the summit we meet Mira and Miran. Congratulations, indeed! That will be Mira's height record! We descend carefully. Then we would like to turn a bit left, where we see on the rocks a group of mountaineers enjoying a sunbath. But I keep too much towards the right and we are already too low, realising that we need to continue by the route of ascent. Over the plateau we see arriving Jure, who managed to summit also the nearby Bratschenkopf. Mira and Miran are faster on the descent so on Weilinger Scharte we all gather and sit down for a short sunbath. As Jasmina doesn't want to rope-up again, the long, nice Kaindlgrat stays in her memory as part of the route, where one still needs to take care on every step. With heavy, a bit tired legs you quickly stick into something, if not something else, in your own pants. When we reach rocks I succeed to persuade Jasmina to keep going with crampons. It is rocky there, but there's also still a lot of snow. Even so we take crampons down too early. My rucksack gets all that iron and two nice ice-picks. Finally here is the top of the chimney. We are quickly through it, only a short crossing of slopes more and we are already sitting on the hut's terrace, where all sorts of burdens fall away from us.

It's very hot. We have only some half an hour for a short rest, we use it more for collecting all sorts of equipment than for resting. Despite a mass of visitors the hut master remains in full control. As soon as somebody empties a beer, he is there, he has everything in account, finally, on a farewell he strongly shakes a hand to each end every one. I like so much mountain descents in summer. You had made your wishes come true, the sun is shining, but you have no more imperatives ahead, it's nice only to enjoy the mountain surroundings. Glaciers are melting, you have time to observe meadows, full of flowers, your trained body is not complaining, even if your backpack is heavy and there's still a long way down to go. Actually why should it? We shall be resting enough at home.

Your text inspires me to visit "my mountain" again in the nearer future!