NAME ALERT: Many maps call this peak "Kharsarak". In this discussion, Kharsarak refers to a nearby 3706 m peak. 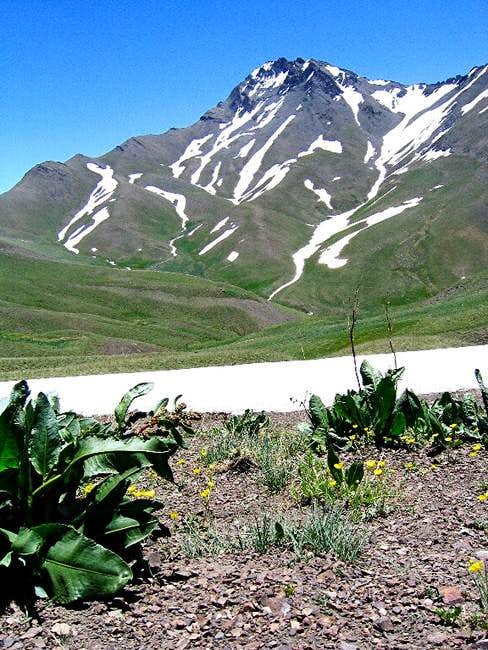 To the east, the 3650 m Gavan Poshteh Saddle separates these peaks from the rest of the nearby 4000 m plus peaks of Central Alborz. To the south, the slopes of all peaks drop very steeply to the bottom of the Varengeh Rood River Valley (2800-3000 m) and to the northeast a 3590 m saddle separates these peaks from Sootak the Small (3845 m). The northern slopes of Kaman Kooh, Sarmahoo and Yakhchal create what looks like a glacially carved cirque that sits at an elevation of 3700-3900 m. This cirque houses a large snow field/small glacier that feeds a pond known as Kaman Kooh Lake.

Kaman Kooh can theoretically be climbed via its southern slopes but this seems to involve 1400 vertical meters of steep scree and cliffs. A much better option is to climb it from the north via Kaman Kooh Lake. The most direct approach to the lake is from the north via the Nessen River Valley. I have not tried this route but it seems to be pretty straight forward. Other options are from the Varengeh Rood Village to the west or the Kalak Bala Village to the northeast (see “Route”).

The northern slopes of Kaman Kooh rise directly above the Kaman Kooh Lake. We tried descending these slopes but ran into steep snow covered slopes (late June) that were dotted with cliffs. This made the descend very difficult (for me) and we had to change our plans. Later in the season when the snow melts away, the climb might be easier but I suspect you will encounter steep/slippery scree instead of snow. The best way to reach the summit of Kaman Kooh is to follow the ridgeline from the top of the Yakhchal Peak. 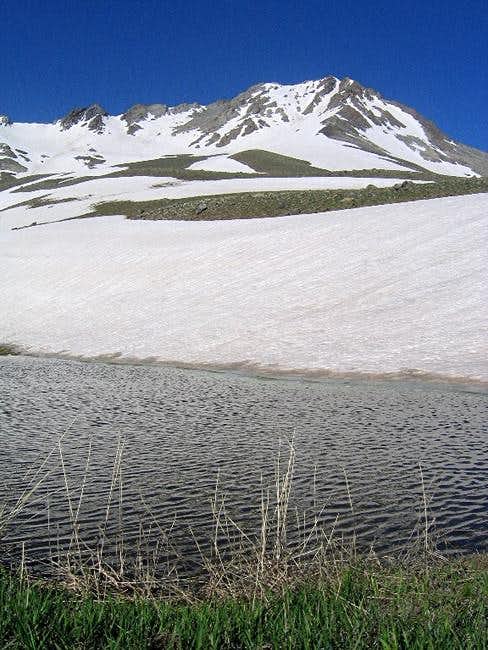 
Directions to Kalak Bala Village
From downtown Tehran drive the Tehran-Karaj Freeway 40 Km west to the town of Karaj and take the Chalus Road exit. Drive the Chalus Road up the mountains roughly 95 Km past the Kandovan Tunnel (2700 m) to a place known as Poleh Zangooleh (2350 m) where you will see a side road to the right (east). This is known as the Yoosh-Baladeh Road. Follow this road 30 Km east first up the Tarkeh Bashm Pass (2800 m) and then Labashm Pass (3170 m) to the village of Minak (2390 m). Turn south onto a dirt road (passable by most/any car) and follow it a few Km to the end of it at Kalak Bala Village (2650 m)

No fees. This is a protected area. Hunting is prohibited. 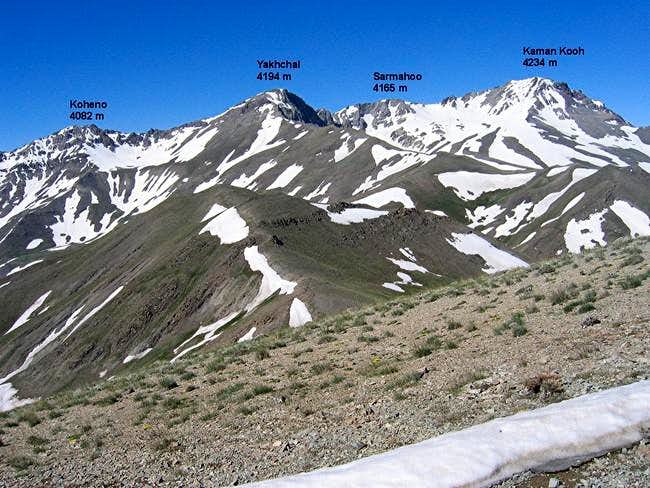 The northern slopes of the Kaman Kooh Group. Click to see the southern slopes.

Easiest in summer (mid June to early October). I personally like late June/early July when there is much snow on the mountains. The grass on the lower slopes is green and flowers are in bloom. Snow on higher slopes will obviously make the climb more difficult.