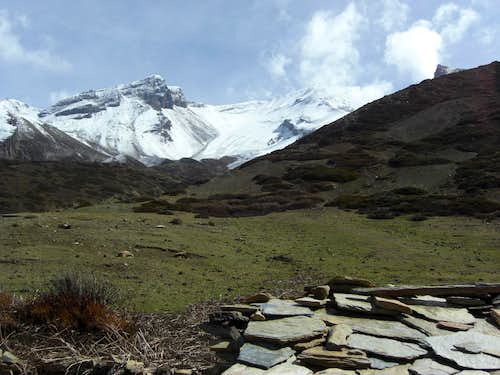 If your Annapurna circuit is self-organized and not planned straightforwardly, that means, if you are willing to do some extra stuff, I strongly recommend a stroll up the south route of Kang La.

I did it in April 2014 and I enjoyed it a lot, despite of a small bronchitis which caused some doubts in the beginning wether I would reach the col and which vanished thankfully after that day. Maybe the sweet little viruses and bacteria got shocked about the height …

Kang La is the col between the Manang valley to the south and the Naar - Phu region to the northeast. It is the only traverse of the Chulu – Pisang Peak ridge with a trail. Kang La separates the Kangla Himal and the Gungang Himal with the four Chulu peaks to the west and the Yungregang Danda and Pisang Peak ridge to the east with a rather “low” hight of 5306 m / 17408 ft.

Normally the Naar – Phu trek will traverse the col from north to south. This trek leaves the Annapurna circuit near Chame and uses the Naar Khola valley up to Nar Phedi. You can proceed north to Chyako, Kyang and Phu Gaon, return to Naar Phedi and climb the Kang La via Naar and Kangla Phedi. For that very interesting detour into a valley scarcely offered by trekking agencies so far (2014/2015) you need an extra permit, a guide and porters, in short: a lot more organization than for the Annapurna circuit – and a lot more money. 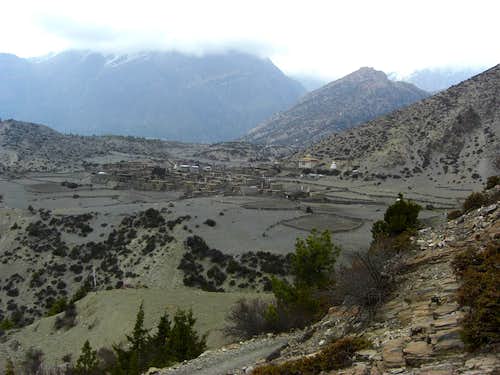 This extra permit for Naar Phu region is not – as far as I know – needed if you travel up the south route to Kang La (and leave it there). The south slopes of Kang La belong to the Annapurna Conservation Area and you (and they) should be completely happy with your ACAP and TIMS permit. So, despite of some warning signs at the southern trailhead at the village of Ngawal (or Nawal), there should be no problem on that south route, as long as you don´t stick a toetip across the area boundary at the col ……

The upper slopes of Kang La not only offer marvellous views on the whole north side of Annapurna group and down into Manang valley. You can use this outing as an acclimatization test for the later Thorong La traverse, which is only slightly higher.

One of the area maps (see the “Maps” - section below) shows a viewpoint northwest of Kang La with a height of 5399 m. The saying is that you have to enter Naar Phu region for a short stretch to avoid steep rock faces west of Kang La and then ascend steeply the northeast slopes up to that viewpoint. We didn´t do that due to the rapidly deteriorating weather and too much snow on the north slopes of Kang La. Wether it is allowed officially to climb this hill without the Naar Phu permit or not I don´t know. 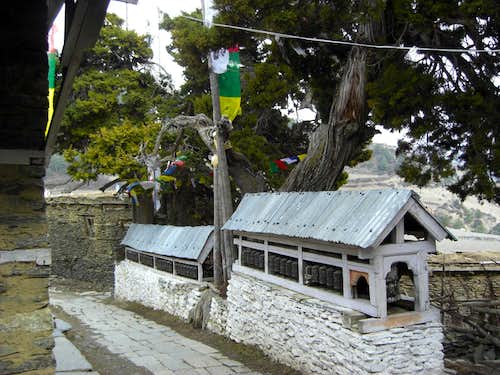 Ngawal is a small village on a grassy flat north above the (actually closed) airport of Humde.

You best reach Ngawal by choosing the upper route from Pisang to Manang which is, in my opinion, the better choice for the Annapurna circuit anyway.

You should make an overnight stay at Chame or Dhukur Pokhari. Follow the valley road until a trail branches off to your right to cross the Marsyangdi river shortly after Dhukur Pokhari and climb up to Upper Pisang, which is a much more traditional village than Lower Pisang on the traditional “Around Annapurna route”. Follow the trail until you arrive at a suspension bridge. Across the bridge the trail climbs steeply up to the village of Ghyaru with a new and huge Tschörten high above the valley. There is a tea shop and restaurant at the entrance of the village with a terrace, offering a kick-ass view to Annapurna II and IV. Don´t miss that!

Traverse the village and follow the trail high above the valley with some ups and downs, passing by some more Tschörten and mani walls, traversing through pine forests and descending at last onto the grassy plain of Ngawal.
Ngawal has some beautiful Tschörten, a huge Gompa at the top of the village and a water driven prayer wheel. And it too has this marvellous view on Annapurna II and IV.

The trailhead is at the upper end of the village. Follow the main trail in the direction of the Gompa; there are some irrigation canals, too. Above the Gompa there is a huge information panel, saying that you need a special permit for the Naar Phu trail.

Take the trail straight ahead of you (don´t go left even if it seems to be more obvious, we did it and had one hour of extra fun that day …). It ascends steeply a ridge north of Ngawal.

At a first trail junction you can use the right hand trail, too, which leads up to a Tschörten above the village; from there on use the ridge crest until you meet a better trail.

Alternatively go straight on until you reach a second trail junction.
The more obvious right hand trail goes up to the above mentioned ridge, unites with the trail coming from the Tschörten and follows the ridge until it levels out. The trail does a huge left bend and meets the third possible trail.

This third one goes straight on at the second trail junction. It is a not very obvious route in the beginning, winding itself through dense bushes and trees, crossing some ravines and climbing up at last to a second ridge running parallel to that one above Ngawal. Follow the ridge crest (huge cairns there) until it levels out and meets the united first and second trail on a more level part of the ascent.

The now united trail traverses to the left (west) and reaches a grassy flat with a very simple shepherd shelter hut. From there you can see Kang La in front of you for the first time. The now obvious trail goes up in northern direction, using meadow slopes and some shallow ravines until it reaches the moraine zone. The trail does some huge zigzags there, climbing in and out the valleys and ravines between the moraine walls arriving at least below the last steep scree and/or snowy slope.

Even there the trail is in good condition, zigzagging up the scree and traversing steeply to the left for two times until you reach the final scree and talus chute below the col. If this part is under snow you have to decide where you best do your ascent.

You reach the col and its Tschörten with a bit of scrambling over talus and scree. The views to the south are better a bit below the col because the rock faces on the west side of the Kang La block the views in parts.

You need ACAP and TIMS permits as you do for the whole Annapurna Conservation area. As long as you don´t enter the Naar Phu region there should be no more need for extra permits.

The village of Ngawal offers accommodation; there are some rather good lodges at the center of the village.

The shepherd shelter hut is sometimes used as a more advanced “base camp” for Kang La. On the down side: you may get visited by friendly yaks there.

Kang La is a trekking destination, which means, that there are no specific difficulties to reach the col. There is a mostly obvious trail even in the steeper upper parts of the route.

You need good weather, sufficient food and drinks, warm clothes, good sun protection and, if there is snow, maybe gaiters, crampons and an ice axe. Hiking poles are not bad.

The upper part should normally be free of snow in October / November. In February through April the chances of snow covering the trail are much higher and the route is more difficult then.

The main problem with Kang La is your stamina and altitude sickness. Many people told us beforehand that it is not possible to ascend and descend Kang La in one day. They say it is too long and too high for one day.
I would rather say that if, and only if you are an accomplished trekker with a good acclimatization and a good stamina, Kang La in one day is manageable.

If you feel the first signs of altitude sickness: turn round!