High group of Mountains where carst phaenomena are most expressed. These limestone mountains are like Swiss cheese - heaven for speleologists. Some deepest caves in Europe were discovered in this group. Several of them have vertical drops of more than 1000 meters. being the first barrier on SW this group has the highest quantities of rain and snow in Julian Alps. In past, winters with 7 meters of snow on Kanin were not rare. By: Vid Pogachnik

The Kanin group seen from north, from the pass Sella Nevea.

In the main ridge of Kanin group are located the main and the highest summits in the group. That ridge starts on the border crossing between Slovenia and Italia called Predel pass (around 1100m) and goes first on the Jerebica (2125m) then over some unimportant mountains falls on the pass Cez Brezic (1699m) and then rises up on the Mala Cernelska spica (2273m) and Velika Cernelska spica (2332m). From those two summits goes in the SE direction another ridge that comes over Vrh Ribeznov (2024m) on the powerful mountain Rombon (2208m). The main ridge goes from Velika Cernelska spica in the west direction over Hudi vrsic (2344m), Grdi Vrsic (2327m) on Lopa (2406m). From Lopa the ridge descend on the important pass Prevala (2067m). From the pass Preval the ridge rises up steeeply on the Prestreljnik (2499m). From Prestreljnik the main ridge continue in the west direction over Hudi Vrsic (2478m), Srednji Vrsic (2543m) on the highest mountain in the Kanin group Visoki Kanin (2587m).

Now from the Visoki Kanin go two ridges. One ridge goes on the Italian side on Vrh Krnice (2443m) and Zrd (2324m) and then steeply fall in the valley. The second ridge is the border ridge between Slovenia and Italia and goes in the south direction over some unimportant mountains and comes on Vrh laske planje (2448m). Then the ridge slowly falls down over Velika Baba (2148m) and Skutnik (1721m) to the valley of Soca.

On the both side of the main ridge of Kanin group are two big plateaus. One plateau is on the Italian side (north side) and the second plateau is on the Slovenian side (south side). On both plateaus are many mountains and ridges. It would be thoughtless if I named all mountains.

Mountains on other ridges

Here are named mountain that they are not located in the nearness of the main ridge of Kanin group but they are on some other ridges but they belong to Kanin group. 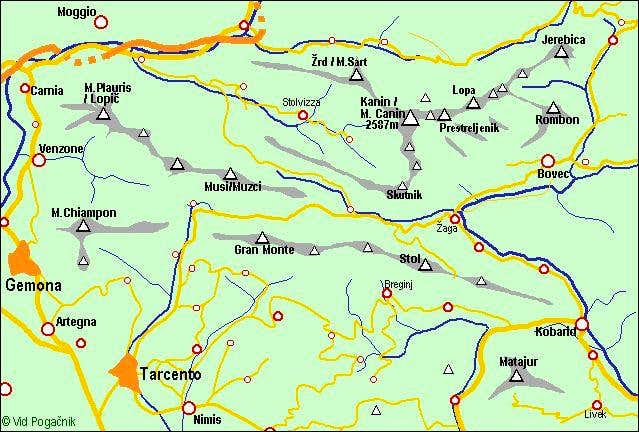