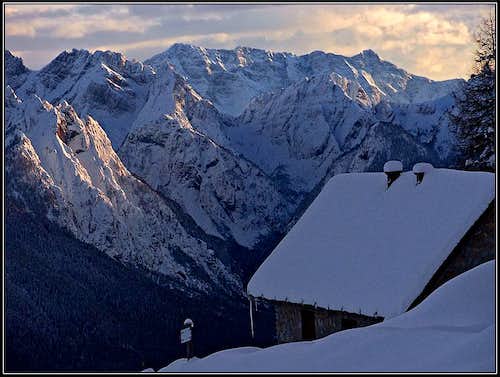 Going from the west towards the east along the whole long main ridge of Carnic Alps, the last important summit is Ojstrnik. The summits further eastwards are covered with forests and only a few elevations still offer views around - remember: the brilliant views on the northern faces of Julian Alps. But as east of Bartolo saddle, 1175 m, the two summits form a distinct small group, let's describe them here. These are Kapin / Monte Capin di Ponente, 1736 m, and Gorjane (Monte Goriane / Goeriacher Berg), 1693 m. They are both wonderful panoramic points. Kapin / Monte Capin is a nice grassy slope, surrounded with the last larches. Gorjane is a small unimportant summit, but below it there's a small village of weekend huts, from the Austrian side perhaps even reachable by a mountain road. It wouldn't be much attractive if there were not this brilliant view around. The whole area is attractive also for mountain bikers and in winter for lonesome skiers. Also Val Bartolo, descending from the saddle of the same name towards the south, is very worth a visit. Already in the beginning it narrows in a quite picturesque gorge where one can find even a small climbing crag. In this gorge a few fortifications, which were once defending Austro-Hungarian empire can still be seen. Soon above the gorge the road is closed for public traffic. Some 100 meters higher the valley flattens and broadens, forming a nice cauldron with picturesque alpine meadows. There are still a few old picturesque houses. The mountain ridge goes from Bartolo saddle on the summit of Kapin / Monte Capin, further on to Gorjane and then down to Thörl-Maglern where Carnic Alps end. The SE slopes are lowering into Slizza/Ziljica valley and the N slopes into Gail/Zilja valley.

From Gorjane there is certainly the most beautiful view on Mangart group. We can see just every corner of it and also the mountains above Val Romana / Remšendol are nicely seen. Beautiful is also the view on the group of Viš and Montaž. More towards the east are other eastern Julian Alps summits. On the other side if Gail/Zilja valley are Gailtal Alps / Ziljske Alpe. The mighty Dobratsch is very close, the picturesque Spitzegel already a bit remote. Interesting are also the views down in valleys. Even broader is the view from Kapin / Monte Capin. It is higher and enables also views far towards the west. 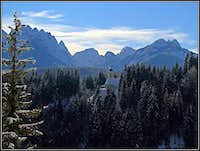 We can start hikes from the villages, lying on the foothills of both summits. On the Italian side, these are: Camporosso / Žabnice, Tarvisio / Trbiž and Coccau / Kokovo, lying by the Tarvisio-Villach road. The entry in Val Bartolo is between Camporosso and Tarvisio. With a car we can drive up to some 950 m. From Tarvisio the approaches are the longest, Coccau is mainly the trailhead for Gorjane. The other option is Thoerl, the frontier town even a bit further towards the east, already on the Austrian side. For approaches from the northern side the best option is Gorje / Goriach village. Of course the southern approaches are due to nice views far more attractive than the northern ones.

1. Kapin / Monte Capin from Val Bartolo, 950 m. Just below the place, where the road is closed for public traffic, towards the E a good, marked trail deters. In several turns it soon climbs out of the gorge. Due to the woods, the views are still not the best. A bit below 1200 m of altitude the path crosses Scalina creek and then winds nrth of its ravine, allways towards the east. After good one hour we reach Sella Canton (saddle), 1413 m, where we find a cross and a big well tuned bell. From the other side a steep dirt road climbs on the saddle where it forks. One branch goes towards the N and later towards the NE and we follow it almost to the summit of Kapin / Monte Capin. When on 1650 m the road turns right into the S slopes, we continue by the SW ridge on top. If we are returning in Val Bartolo, we can descend also towards the north. We find the marks of Karnischer Hoehenweg some 40 meters below the summit, in the E slope. We follow them towards the N and NW all the way to Bartolo saddle (in between we cross afew mountain roads). Then by the valley down to the parking place.

2. Gorjane from Coccau, 711 m. From the village a cart road ascends towards the N-NW. By it also the Traversata Carnica (here marked with No. 510) goes. On a terrace above the village the asphalt ends, a bit better road continues till the last house, where right up a dirt road deters. We follow it all the way to the summit. In the lower part it goes all the time above Canale dell'Inferno (creek), above it makes a few turns through the woods, then one big turn towards the east and then soon reaches the upper meadows. Gorjane village is behind the ridge, on the Austrian side. 3 h till ther. When enough snow, skiing would be possible by this route, the most beautiful must of course be the upper meadows.

3. Gorjane from Thoerl, some 700 m. Also from this village Karnischer Hoehenweg goes up on Gorjane. It is signed with No. 403. It goes all the time by the main ridge, allways towards the west. In the beginning the path is steeper, from the point 1298 m on it is quite flat. 3 h 30 min to the top.

4. From Gorje, 664 m. Towards the south from the village a series of mountain roads goes. We must go by the one which is mostly towards the west. It is also marked No. 480. After several turns the road takes the S direction and finally the SE one, and then finally reaches the village. The marked path takes a few shortcuts through the woods. 3 h 30 min to the top of Gorjane.

5. From Tarvisio. From the town we head northwards along the Borgo creek. Then we go on Borgo saddle, where we turn left and go by the ridge on Monte Nero, further on Canton saddle and as described above on top of Kapin / Monte Capin. Then eastwards on Gorjane. Some 5 hours.

6. Sentiero Orrido Slizza. East of Tarvisio the river Slizza/Ziljica forms a short, but quite picturesque gorge. Already in the 19th century through it a protected path was built. It can make us some fun on a short hike, lasting about 1 hour. The path goes by the SE side of the river and so strictly speaking belongs already to Mangart group, but let's mention it also here. From the main road Tarvisio-Fusine we deter in Boscoverde towards the north and park opposite of the railroad station. The hike leads us (marked) first to the monument of these "Austro-Hungarian Termopile", then down to the river and by it towards Tarvisio. We exit the gorge soon after the ex railroad bridge. 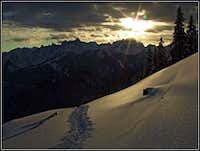 There's everywhere quite a lot of weekend huts, may be in summer you can get on Gorjane also food and drinks.

We can ascend these summits any time of a season. Choose a clear day. In winter, for skiing you must have enough snow.