The oldest of the five major volcanic structures on the Big Island of Hawaii, the mist-shrouded Kohala Mountains house a wonderland of dense tropical forest, magnificent waterfalls and spectacular canyons, to mention a few of the many features. Protected on all sides, the area is safe from development and likely will remain in its pristine condition: To the northeast are the precipitous cliffs of the Waipio and Waimano valleys; to the west and north lie the Pololu Valley and roadless north shore; and due east is the off-limits confines of the Kohala water district. Most of the rest is contained in the Kohala State Forest Reserve and other natural area reserves. 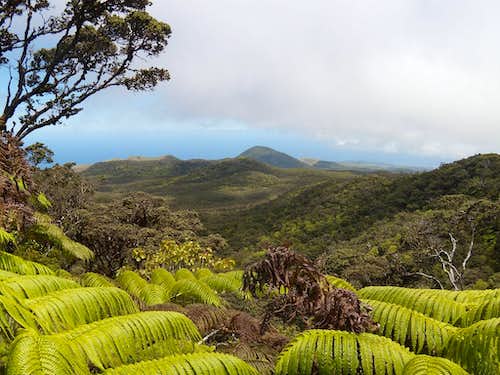 The highest point, known as Kaumu o Kaleihoohie, is an area of very high rainfall, well in excess of 160 inches/yr but not particularly difficult to reach with the right equipment and determination. The peak is also the 10th highest prominence in the state of Hawaii and the 4th greatest on the big Island with at least 2,560 feet of relief from the saddle between it and Mauna Kea, the state highpoint. Along the way to the peak you will be treated to twenty foot tree ferns, a forest of Ohia Lehua trees and mosses of every description – a true highland tropical rain/cloud forest. Of Hawaii's more than 12,000 endemic species of native flowering plants, a high percentage of them grow in the confines of this mountain range. A negative in this area is the population of feral hogs that plague most of the Hawaiian forests. They have done much damage to the native ecosystem over the past 150 years or so. Introduced European hogs in the 19th century interbred with the introduced Polynesian hogs and have run wild over all the islands ever since. The hogs eat fallen tree fern trunks causing places where water can collect into small pools on the partially consumed trunks perfect for mosquitoes to breed. The mosquitoes in turn infect the much endangered endemic bird population with avian malaria, decimating them. Major efforts are ongoing on all the islands to fence off and systematically eliminate the hogs or at least contain them to designated areas for hunters but it is a Herculean task given the vast areas and nearly impossible terrain of the jungle. Hunters have caused the hogs to be wary of humans but there are reports of them attacking rather than running so be aware and wary if you sight them. The fence line at the edge of the forest has gaps big enough for a cow to get through at most of the stream channel crossings so be aware that you might run into a feral cow or two in the area. Introduction of alien plant species is also a problem and the reserve management requires all visitors to carefully remove any seeds or possibly contaminating vegetation from shoes and clothing before entering the forest. The hike is not long, only 7 miles round trip from the south, but must not be taken lightly: This is an area of dense vegetation, faint animal and hunter trails leading off in all directions and frequent and persistent rainfall and dense clouds and mist making orientation potentially difficult. If you manage to get lost, you are really lost! See route description and have state-of-the-art GPS equipment and know how to use it. On the plus side, my Verizon cell phone worked well along the route of this hike, except in the saddle between Eke and the summit.

Many airlines have flights to the Big Island and some have direct flights into Kona from the west coast. My preference is Hawaiian Airlines. From Kona, take Hwy 190 north to Waimea and turn west on the Kohala Mountain Road (Hwy 250). Park on the wide shoulder at MP 5.6 and head up the hill as per directions on the route description page.

The routes described on the route page apparently cross land leased from the State of Hawaii for grazing purposes but appear to also be public access to the forest reserve area. On-line info is somewhat ambiguous but since there are no postings to the contrary and all gates are unlocked, open or broken down on the routes described one must presume this access is allowed. Once across the meadows and over the fence at the forest boundary you are in the Pu’u o Umi Forest Reserve and here are the rules: 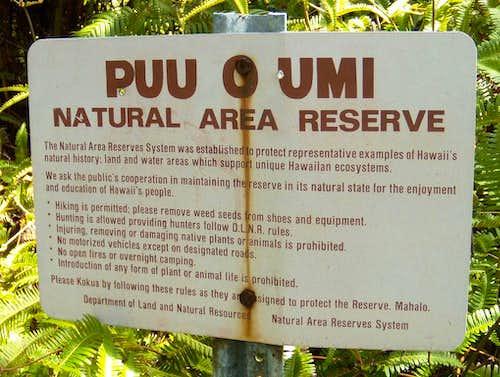 The rules of the forest

No overnight camping is allowed in this area.

Hi Don, it's an M not an N. Also, I posted a map of the route I took up the ranch land that avoids all of the gulch crossings. This is a much more direct route, although there is one NT gate that one has to cross. I'm dubious as to the strictness of it. Map is here: https://www.summitpost.org/direct-ranch-land-route-to-rainforest-stile/1039726 Paul

Hi Paul, Thanks for finding that error! Fixed now. Hope all is well with you. Don