Kawiakini is the highest summit on the central volcano on the Island of Kauai, and is one of the most scenic mountains in the world, not to mention, occasionally, one of the wettest places on earth. The weather guage at nearby Waialeale, less that a mile from the summit, has recorded over 900 inches of rain in some years but averages somewhere in the mid 400's over the long run. Several other places have claimed the dubious title "wettest spot on earth". 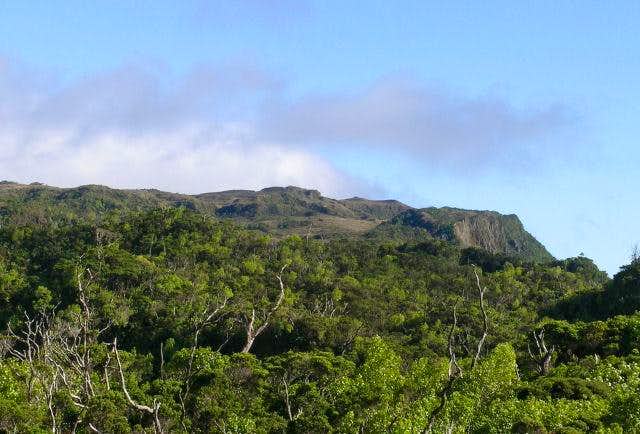 Summit of Kawaikini from the NW

Waialeale ("rippling waters" in Hawaiian)is the name given to the small lake at the northern end of the summit rim, the highpoint near there where the official rain guage is located and a common name for the mountain as a whole.

The volcano itself is long extinct, and millions of years of erosion have contributed to its rugged beauty.

The rain keeps the summit shrouded in clouds most of the time and makes it (officially) inaccessible by foot. To the east are dramatic waterlogged cliffs, which were used as backdrop in Jurassic Park, South Pacific and many other movies. The access to the summit is further guarded by sheer cliffs on the south and the north side and to the west are the thick jungles of the Alakai Swamp. The ancient Hawaiians were able to reach summit by climbing a ridge from the northeast, but the most realistic approach is to slog through the Alakai Swamp, starting on existing trails of Kokee State Park.

At the summit, the ancient Hawaiians built an alter, which still remains. There is also a modern rain guage at the top, used to verify the "Wettest Spot on Earth" designation (about 450 inches a year). The rain guage is serviced by helicopter, which is also how most tourists view the peak.

The tourist industry has taken to refering to the semicircle of cliffs along the summit rim as "The Blue Hole" and "Waialeale Crater" but this is an erosional feature and not a crater or remains of a crater.

With the summit guarded on three sides by cliffs thousands of feet high consisting of wet, slippery and loose volcanic rock, the only possible approach is through the forbidding Alakai Swamp. A trail once existed up what the ancient Hawaiians called "The Great Ridge of Kane" from the NE to make offerings to Kane, the god of creation and fertility. The last documented ascent of this trail was about 1902 and the route has long been lost to the jungle and landslides.


Another trail was built to service the rain guage about 1911, but after the hurricane of 1959 and the advent of helicopters, that trail was abandoned. A couple of additional hurricanes in 1988 and 1992 finished the job. The route of the trail still appears on some maps but only exists beyond the mid-swamp bogs as a workable "trail" in a few short sections and is very difficult to follow. A more viable route has recently been forced through the swamp and will be described in detail in a soon to be added trip report.


There are remains of a small Heiau (altar) on the shores of the small summit lake, Waialeale (rippling waters), and there is some evidence that present day Hawaiians somehow reach this spot and make offerings. Currently (Feb. '06) there is a small wooden carved figure at the shores of the lake.

The way via the Alakai Swamp is about 13 miles, most of it through wet, muddy jungle terrain and over and under fallen trees, the result of two major hurricanes in 1988 and 1992.

According to the Ultimate Kauai Guide, the ancient Hawaiians reached the summit by climbing a ridge from the northeast.

The ridge that the Hawaiians climbed in days of yore can be reached by trail to this spot. It is called the Tunnel Trail, and can get you to the gauging station a short distance SE of the map point. The actual map point is in a tunnel that was carved into the mountain in the 1920's, but the ridge above can be climbed to the summit. Or so I've read. It's a bit more than 2.5 miles one way, but almost 4,000 vertical feet of climbing.

Access to the Tunnel Trail is via State Route 580 (Kaumoo Road) from Wailua. The road is paved at the beginning but becomes muddy dirt where 4WD is recommended. More details are found in Blue Hole route.

A campground is available in Kokee State Park. Permits for it must be obtained at the State Parks office in Lihue (by mail or in person), before you arrive at the park (info). The camping fees are very reasonable campared costs of most other lodging. At Kokee you need to be prepared for cool nighttime temperatures due to the high altitude. Expect temperatures in the low sixties in the daytime and mid 40's at night sometimes dipping even lower in "winter".

On the eastern side of the mountain, camping is said to be illegal, which technically rules out any multi-day hikes. However, there is plenty of wilderness to hide in, and apparently not much in the way of enforcement.

The entire Hawaiian island chain once had a complex and unique ecosystem that had developed in virtual isolation over millions of years. With the arrival of the first Hawaiians about 1500 years ago and especially with the arrival of the first Europeans in the 1770's major changes have occurred. Just a few examples: Something like 85% of the endemic bird population has been wiped out, hundreds of invasive plant species have been introduced, displacing native vegetation, and many non-native animals have arrived, endangering native species. Much work has been done to fence off sections of the island in order to concentrate feral hog populations so they can be systematically eradicated. The fencelines on the upper reaches of the island are there for this purpose and are working according to reports.

Without a doubt, the best guidebook for exploring Kauai is the Ultimate Kauai Guide. It is has excellent maps, great photos and detailed info for waterfalls, trails, beaches and everything else an outdoor enthusiast might want. It includes maps and info on Kokee State Park trails and two trails on the eastern side of Waialeale - the Jungle Trail and the Tunnel Trail. (If the authors did not invent these trails themselves, they were probably the first to record them.) If you get this one guide, you won't need any other. Be sure to see their website for updates and additional info. (This is an unpaid endorsement, honest.)

Lodging prices on Kauai are generally atrocious, but there are plenty of state and county campgrounds at very low rates, and a couple of cheap motels in Lihue. See this page for advice. Also, a good on-line source to locate lodging is Vacation Rentals By Owner: www.VBRO.com I've used this for visits to Kauai, Maui and The Big Island and have never been disappointed.

Lihue has a well-stocked Wal-Mart which is a haven from high island prices (while no doubt sucking the life out of downtown Lihue). It has lots of camping and snorkling equipment, as well as Philippine-made "Hawaiian" souvenirs, at low mainland prices. Lihue is also blessed with every conceivable form of fast food, including 99-cent specials, and most of the basic services of strip mall America. If you depart from these well-worn trails, however, expect high prices.

Nearly all natural attractions on Kauai, such as beaches, waterfalls and state parks, are free. There is so much to see and do on Kauai, there seems no compelling reason to attempt any strenuous hikes on your first visit -- like Waialeale or the Blue Hole. Just hang loose, IMHO!

The web address for the rain gauge link appears to be incorrect. I believe the correct link is http://hi.water.usgs.gov/recent/waialeale.html

In the 1977 edition of his trail guide, Robert Smith wrote: "Waialeale Wilderness Trail, 6 miles, 1500' gain, full-day hike (hike raiting: difficult).............The route-there is no existing trail-to the summit begins about seven miles in on the Mohini-Waialae Wilderness Trail and leads eastward through the Alakai Swamp. The hike requires sound physical condition, good equipment, a topgraphic map, a compass, trail-marking tape, and a stout heart. Unless you begin the hike from the Mohini-Waialae Wilderness Campground, it is not possible to complete a round trip to the summit in one day and since camping is not permitted, it is necessary to complete the hike in one day.
Ralph Daehler, District Forester for Kauai, reported that hiking will be discouraged in the Waialeale portion of the Alakai Swamp until such time as trials are established and rules and regulations for their use are defined. He noted that Waialeale is an important watershed area and has to be protected
I recommend the Alakai Swamp Trail for hikers who are interested in exploring the swamp."

In early August, we climbed/hiked Waialeale and also reached Waialeale Lake at the end of the Waialeale Trail. After two preliminary "get acquainted" hikes that took us within about two and a half "trail miles" of Waialeale, it took about thirty-two hours of trekking over four days after leaving the end of the Camp 10 road. For a detailed description, maps, photos got to
www.geocities.com/volcantrek8/waialeale.html?200521.
Without a doubt, the Waialeale Trail existed at one time and fragments of a well preserved trail still exist. In other areas, it's been completely destroyed by three hurricanes. No maintenance has been done since the USGS switched to helicopters in the '60's to service the two raingages and streamgage next to the trail.
Our route can also be reached via Waialae Camp. I'm using a crummy condo computer but I'll try to upload a photo or two. My climbing partner has the CD with most of the photos. Adios Waialeale Mike
If you're interested in going off trailing in Hawaii, please contact me at volcantrek8@yahoo.com.