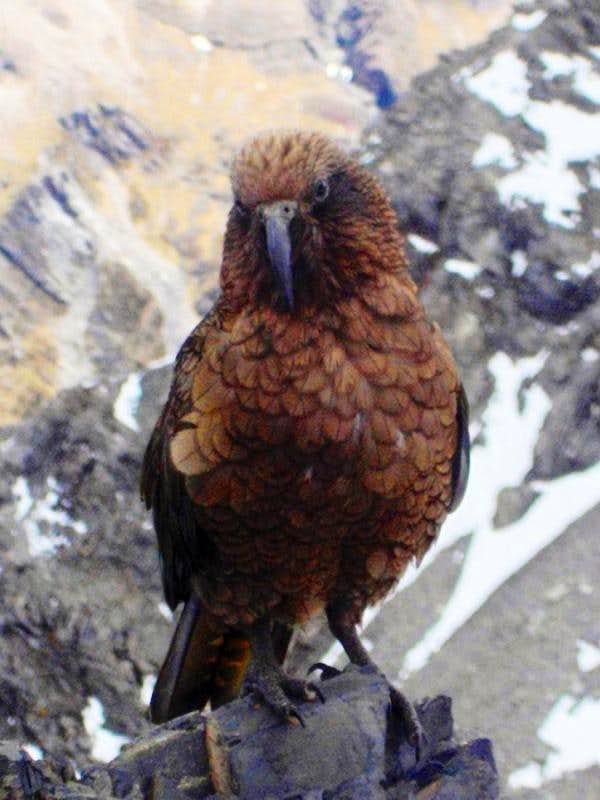 The kea is an interesting native wild bird in New Zealand. It is very inquisitive, and not at all afraid of people. This one visited us right on the summit of Avalanche Peak, no doubt expecting us to leave something of interest. Don't be surprised if it flies off with your belongings if you leave them unattended for a moment! On a different occasion, down in the valley, I saw another one ripping apart the rubber seal around a car window ... January 1, 2007.
« PREV NEXT »

Something about this bird reminds me of ravens.

I'm biased, because I've been watching ravens
everyday for the past 20 years.

Yeah, I can see the similarity. Both quite big birds, both inquisitive, both intelligent - as bird species go. But there are also some notable differences.

While the kea is a threatened species, it's easy to find one. If you're in their territory, they will come and investigate you. In my experience, ravens are much harder to find, despite the fact that there are many more of them.

Humans are no direct threat to the kea, but indirectly, we are responsible for their plight. Simply said, we let loose foreign predators to New Zealand that took a liking to their eggs. Many local bird species are threatened or already extinct because of that.

Another difference is in their habitat. Keas are rather picky in this regard and live only in the forested mountains, of the South Island of New Zealand to be precise. While looking for food, they'll go above the tree line too, or seek out humans near the mountains, because they've learned that we often leave food.

I know, it's nonsense to assign human traits to birds, but to me, the kea comes across as friendly, yet mischievous, ready for action should I be so careless to leave my peanut butter sandwich unattended ;). Like it's only my fault if it takes it, it not stealing it, oh no, I shouldn't have put it out there! And this one hopped around, hiding behind rocks occasionally, as if it was trying to get out of my line of site to approach my pack while I wasn't watching. But when I turned around and looked, it quickly put some distance between us again. Funny creatures!

It isn't nonsense to assign human traits to
animals. We're ALL guilty of doing that, in
order to make better sense of our world.

Such beautiful colours. I like this bird.
Cheers, Hiltrud

Re: What a beauty!

Yep, I like it too, in fact I just smile automatically when thinking about it. They are sooo cheeky!
To be honest though, I think there are better pictures of keas on Summitpost. What do you think about this one?

Re: What a beauty!