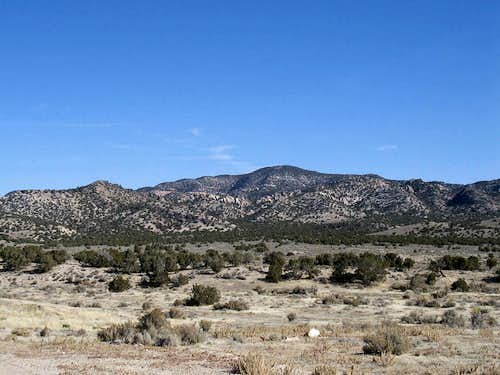 Keg? Mountain. What a strange name in a predominantly Mormon state. I have no answer for the origin of the name but it is an interesting one, one that had me looking twice at my map. Since Keg Mountain is one of Utah's prominence peaks, coming in at #68 on the list, it naturally was one I wanted to visit. More about prominence in a later section but for now, understand that there are a few of us that chase these remote peaks if they are a prominence peak.

Keg Mountain is a remote peak found in a western Utah desert area and is not a place you'd probably want to visit in the summertime when the furnace is turned on. It is a place where you will not meet many others, if any, during your visit and if solitude is your goal, this is the mountain for you. I searched google looking for how Keg Mountain got its name and I found no answer there although I did find an entry by someone else who was wondering the same thing.  The link to that page no longer works but it contained the following fact:
"Captain James H. Simpson and his exploring party were saved from certain doom by a spring they found on Keg Mountain." I wonder if they likened the mountain to a water keg, certainly not a beer keg although for rebellious youth, this might make a good place to hold a kegger.

The western desert of Utah is an arid region and yet it does have areas of juniper and pinyon forests. Water is scarce so bring your own and make certain your vehicle is desert worthy. There is no cell service in the area and I couldn't even make cell contact off of the summit. Satellite phones anyone?

area map
I left US highway 6 at Jericho, a railroad designation (nothing was there) and turned west on the Jericho-Callao road. In about 4 miles you pass a turn off for "Little Sahara", a very popular recreation spot with the dune buggy and dirt bike crowd. There is even a campground there but expect to pay a fee for using the area. Continuing on past "Little Sahara", the pavement turns into a good dirt road which you will follow for the next 33 miles. I used the Benchmark Utah map book and that was good enough to get me to the turnoff to Keg Pass, 39.5 miles from highway 6. A good move is to zero your odometer when you turn off of Highway 6. Then plan to spend 39.5 miles to get to the Keg Pass turnoff.

I'm not providing mileage from Salt Lake City or from I-15 as your Utah highway map is sufficient to get you to the junction of US 6 and the Jericho-Callao road junction. Plan on getting off of I-15 at Santaquin and taking US 6 toward Eureka after which it will swing south towards Jericho Jct. If you get serious about visiting this peak, take the time to study your maps and even get GPS coordinates for key junctions from either Topozone or the national geographic Utah Topo CD's.

There are very few signs on the way but I found the main road to be easy to follow.

I made a foray out to the Drum Mountain range on Dec. 4th, 2007 to check out the possibility of doing Drum Mountain. While I didn't end up with sufficient time to get the highpoint of the Drum Range, I did discover that there is another way to access the Keg Mtn range, with most of the travel on a paved road.

Near milepost 100 on U.S. 6, just south of Lynndyl, highway 174 takes off
and heads towards Topaz Mountain. The pavement covers most of the miles (I didn't drive this alternative route so I don't have mileage to pass along).
Go to point A on the below map, turn right (north on a dirt road) until you come to point B and turn right (east on a gravel/dirt road). Go east until point C, signed for Keg pass and turn north. Then follow directions posted to get you to the potential trailhead (high clearance needed). Next time I am out in this area, I will log the miles and so this information is to just give you the idea of an alternative route that has more pavement than the other way in. 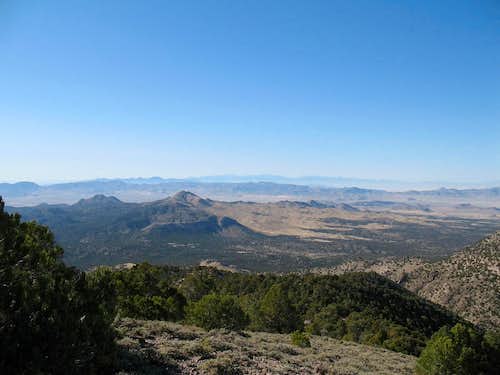 A view from the top
No red tape as far as I can tell. Most of this land is managed by the BLM and if you camp, make it light impact. Pick up after yourself and carry out your trash. Maps are available from the BLM office in Fillmore Utah. 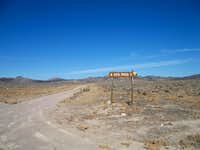 You could find camping up this road
As mentioned above, this is BLM land for the most part and the BLM will allow car camping on the land. Do your best to help the BLM maintain this policy by not leaving trash or fire rings. Use a camp stove and clean up after yourself. I say this because it really makes me mad to see how many folks just leave their trash all over the place.

Its desert but it can be brutal in a bad storm. Roads can quickly change to impassable in some areas and so pay attention to what the weather forecast is. The Delta Utah weather forecast is probably the one that will be the most helpful. 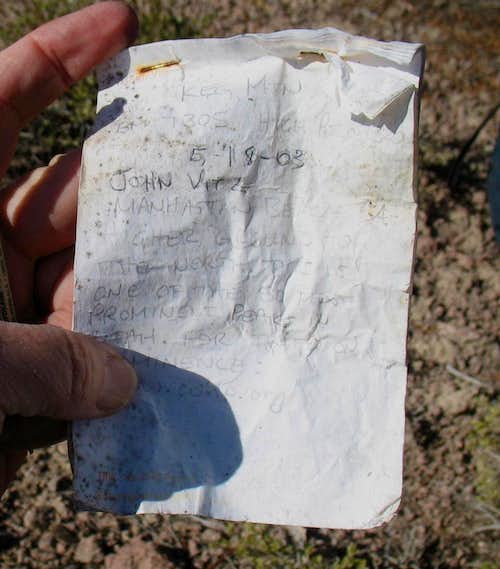 Eric Willhite put up a good page on his visit to this mountain area. Click HERE

Dennis Poulin and Sam Grant have also been kind enough to share their GPS tracks on peakbagger as well. 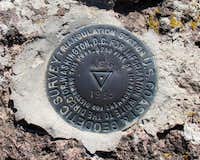 Utah has 85 prominence peaks with 2000 feet of prominence (or close to 2000 ft). Of course, many of them are in the western desert and provide a challenge of just getting to them.

For a good explanation of prominence, check HERE. at peaklist.org.

Here's a great map you can see by clicking on this LINK. 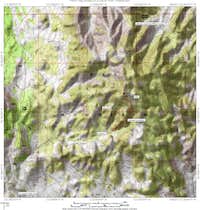 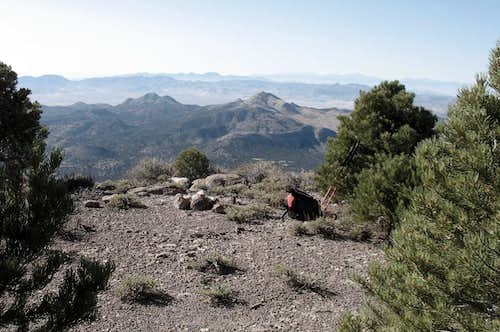 There are probably many ways to get to the top of this mountain but I felt the way I went worked fine. It is 39.5 miles from US 6 to the Keg Pass turnoff and then 5.6 miles to where I parked. Head north towards the pass but take a right onto a lesser road (here) and proceed towards the mountain. The road worsens but never get truly terrible although high clearance is a must. I never had to put my truck in 4WD but rainy weather might change that. I don't intend to find out. I drove in as far as I could take my truck (here) and then just struck off up a ridgeline that seemed closer than the one I had originally
studied on the map. My route worked fine but I did have to skirt around a couple areas on the way up. It took me about an hour and a half to get up and most people would travel faster but I defer to my age these days. I'm just slower than I used to be.

Round trip distance 3.2 miles
Elevation gain: 1200 feet
Time 3 hours including time on top and figuring out my route.
Granted, the stat's aren't overpowering but the isolation could be.
I wouldn't want to have a vehicle breakdown on a weekday, you probably wouldn't see anyone until the weekend, if then. Carry plenty of water,
camping gear, food, and a spare tire or two. Be self sufficient in this kind of country, your life could depend on it.

Again, Dennis Poulin and Sam Grant have both put up GPS tracks of their visit to this mountain at peakbagger.com   -  worth checking out if you use GPS and can download
these tracks.

Note the log entry by MikerHiker, he did this one with a nice snow cover. 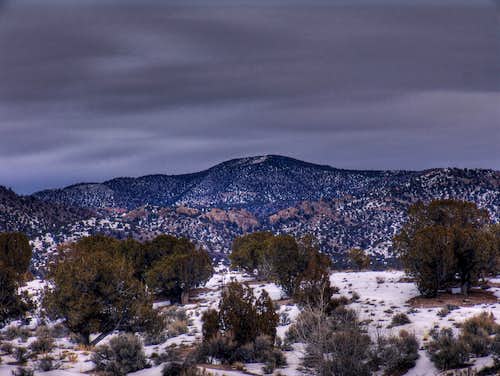