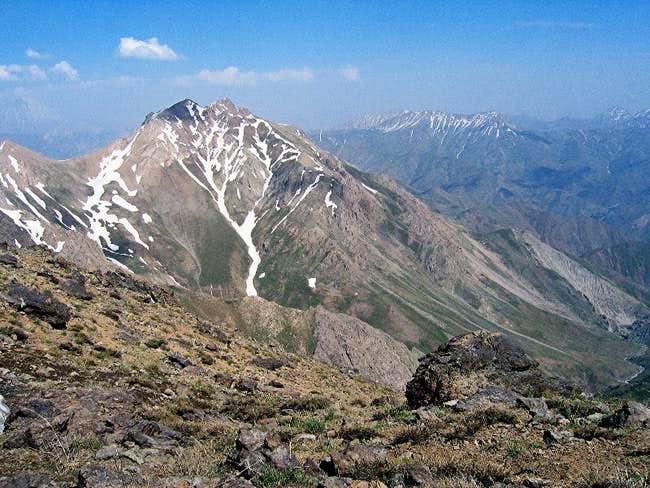 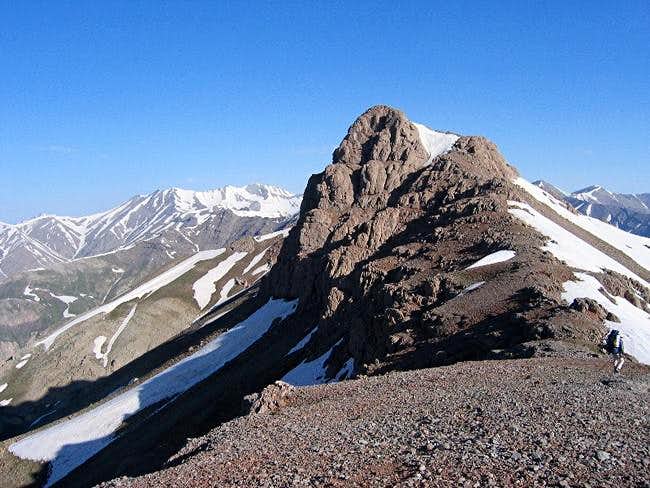 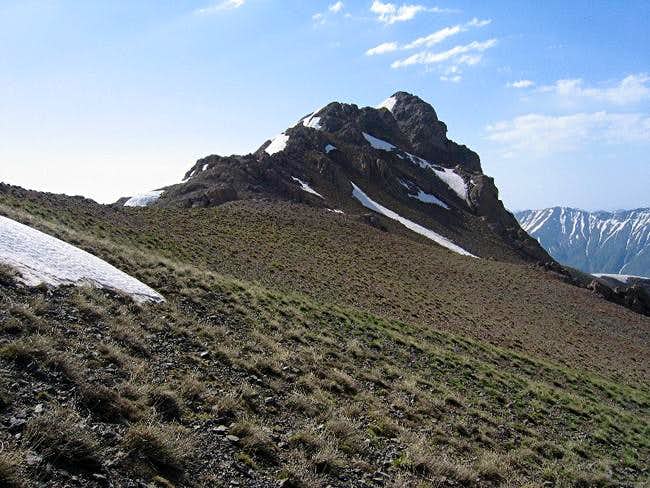 Traditionally, the name “kharsang Kooh” has been used in reference to many of the peaks that rise to the north of the village of Garmabdar. In this discussion, however, Kharsang Kooh will include only two peaks: (This excludes the 3806 m “North Kharsang Kooh” which will be treated as a separate mountain).
1) Kharsang Kooh #1 (west peak) 3930 m
2) Kharsang Kooh #2 (east peak, a.k.a. “Gizno”) 3910 m

The 1:50 000 map does not give an exact elevation for #2 but its contour lines show between 3900 and 3920 m. The schematic map (see the link above) calls #2 “Gizno” and gives it an elevation of 3920 m (My GPS/altimeter showed 3945 m). These two peaks sit at a distance of roughly 650 m from each other (on a straight line) and are separated by a 3870 m saddle. To the south, their common slopes drop steeply down to the village of Garmabdar. To the northeast, the slopes drop just as steeply to the bottom of the Lar River Valley. To the east, #2 is connected to the high points that form the Khatoon Bargah Peak, while to the north a 3690 m saddle separates #1 from North Kharsang Kooh.

Although #1 is the higher of the two peaks, #2 is certainly the more dramatic looking one (Maybe that is why it appears higher in many of my pictures). To the south, just below the summit of #2, you will find a rocky wall 50-75 m tall. This wall can be avoided by approaching the summit from the north. When we were there in late June, the remains of a huge winter snow drift (that probably forms every year) still covered the northern base of the summit of #2. Steps dug into this snow pack by previous climbers, created a “ladder” that led to the top.

Kharsang Kooh is usually climbed via its steep southeastern slopes above the Abnik Village (Just to the west of Garmabdar). I have not tried this route but the slopes seem to be very tedious. This route apparently takes you by a couple of abandoned coal mines and a cave to reach the 3690 m saddle between #1 and North Kharsang Kooh. From there, you will head up the northern slopes of the summit of #1. These slopes, which I have descended, are quite steep and in places will require some hand and foot climbing or traversing steep snow banks, especially early in the summer season.

An easier but much longer approach to the summits of Kharsang kooh, is to start at the Yoonza Pass and hike the ridge-top past the Oshtor and Khatoon Bargah Peaks (Please refer to the Khatoon Bargah Page for more details and see Red Tape below). 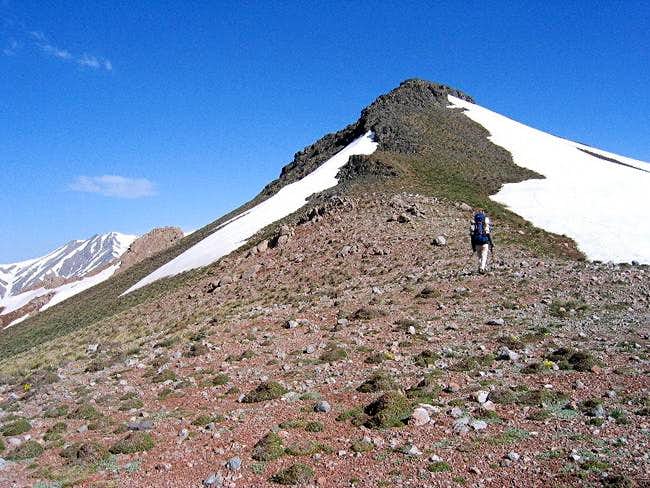 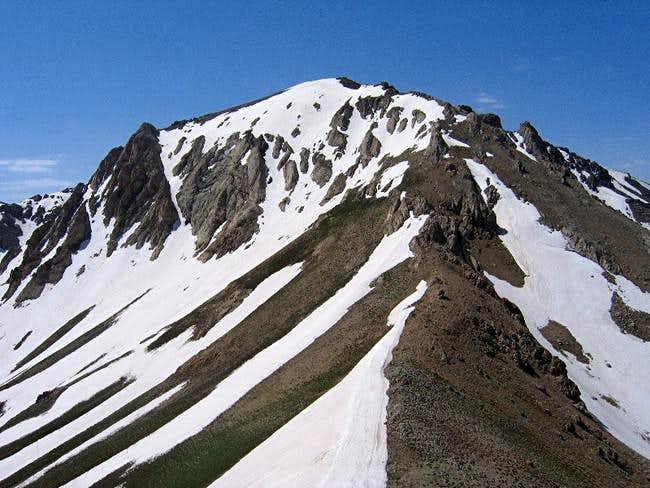 From northeastern Tehran, take the Babai expressway east and then take the Lashgarak expressway north up to Ghoochak Pass (1950 m). Follow the road north down the many switchbacks to the bottom of the Jajrood River Valley (1700 m). Drive 20 Km north to the main square in the village of Fasham (1950 m). Left (west) will take you to the ski resorts of Shemshak and Dizin. Turn right (east) and drive 15 km to the villages of Abnik/Garmabdar (these two are very close. Abnik is further west). If you do not want to go to Yoonza Pass, you should start to the north of Abnik. The drainage to the north of Garmabdar seems to get you onto more difficult slopes.

If you have obtained permission (See Red Tape below), you can drive past the gate up the dirt road east of Garmabdar (passable by most/any car) to the Yoonza Pass (3100 m).

Kharsang Kooh Peak and the villages of Abnik/Garmabdar fall outside of the Lar Protected Zone and will not require any permits. The area east of Garmabdar Village, including Yoonza Pass however, do fall into this zone. Our permit was obtained by my guide and I neglected to ask him where he got it from. Any guide should be able to get this for you. It seems to me that the purpose of the protected zone is to discourage illegal hunting and to restrict access to the scores of the residents of Tehran that flood these mountains on the weekends. Hikers, bikers etc should have no problem obtaining a permit.

Easiest in summer. The road to Yoonza Pass is closed in winter. I personally like late June/early July when there is still plenty of snow on the mountains and the lower slopes are covered with green grass and flowers.

If you are not familiar with these mountains, you will benefit from the presence of a guide. I used Araz Adventure Tours and was very satisfied.