Kilimanjaro from the air, 2003 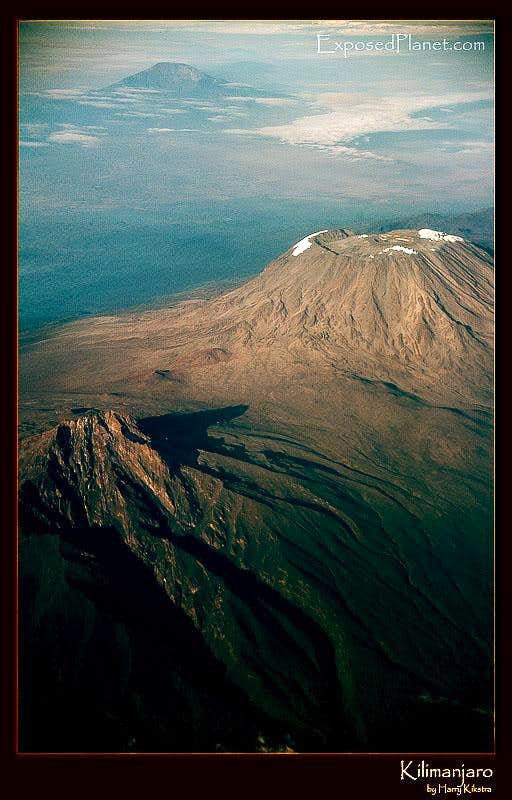 I climbed Kili first in 1998, summiting at X-mas morning, creating a very special experience. Not only was this the first of my "7summits", but it was quite amazing to have a white X-mas close to the equator in Africa! 5 years later I flew over Kili when working on the Planet Race. Most of the crew and contestants were asleep due to the brutal working scheme, but I knew that this image was going to appear as it was amazingly clear when flying from Nairobi. You can see 3 peaks in the image, at the left bottom is Mwenzi Peak, in the center is Kibo Peak. Both of them are part of the Kilimanjaro mountain, with Uhuru Peak -the highest point and therefore the Summit of Africa- being the highest point of the crater rim on Kibo. In the back you can see Mt Meru, a separate volcano, about 60km away from Kibo, close to the city of Arusha. Kilimanjaro was known for its impressive glaciers, but they are disappearing at an alarming speed as can clearly be seen on this image. It does not matter what you think of the different theories for the reason for Global Warming, fact is it is happening and yes, though I actively try to limit the size of my footprint impact on the earth, flights like mine are definitely not improving the situation. If you want to enjoy the experience of hiking between glaciers close to the equator, you better be very quick, as these glaciers might be gone forever in the next decade.. Was already posted on ExposedPlanetExposedPlanet, but might be useful here for comparison reasons, if there are similar pictures from other years..
« PREV NEXT »

... and yes, you are right, the shrinking of the glaciers is frightening.
Very sad...
Cheers
Stefano

Re: A great picture.

thanks Stefano, yep, they will be gone soon..

if that was 2003, and it is now 2007 are there any glaciers left? The famous pictures of seeing the glaciers in the middle fo the African plan are now gone? I am heavy hearted when seeing this picture.

Re: A terrible sad picture..

You will have to look hard and take a long lens in order to make those pictures now.. Many pictures are made after some fresh snow, which can occur daily, but on this image you see the stuff that is really left.

Since the climate of the Earth oscillates up and down, at times with as much as 7 degrees centigrade in 10 years, the glaciers may well be back sometime. There was a time when the alpine glaciers were all gone (postglacial warm period), then they reappeared and reached a maximum during the little ice age. The earth is not static, and we had no right to expect a constant temperature.

Thanks for your vote and comment. I will have to disagree. The glaciers were formed before the much higher Kibo summit exploded off the mountain (it's a volcano) and though they could not be formed at the current height of the mountain, at least due to fresh snow and cold temperatures they were always constant in size until the last few decades. You will have a hard time finding someone who remembers Kili being without glaciers before and you will need a long line of family if you ever want a relative to see them back again, because if that ever happens it will take many thousands of years and a self-destruction of the human race preceding it.

Of course I was speaking of probably thousands of years (although it might be shorter). As for the self-destruction of humanity, I think not, we are a breed of survivors, much like rats, and will be very hard to wipe out, even for ourselves.

A brilliant photo, but a very sad story of the shrinking glaciers. When will people wake up to climate change? My wife and I climbed Kili on our honeymoon back in 1998.