Kings Peak is 2065m in elevation and I believe the 8th or 9th highest mountain on the island. My girlfriend and I have been meaning to do this hike for quite a while now, but it has not worked out. Very glad we finally got around to it! We decided about a week prior that we had a free weekend and were looking for something adventurous to do. This was our first overnight hike of the year. I was a bit concerned about snow, being that it seems to hang around all year in the Strath and we do not have crampons, but I saw a trip report from about 3 weeks previous that looked pretty good. Also, the weather has been smoking hot so I knew the snow was melting quick!
We set out driving from Campbell River Sunday morning and arrived at the trail head just before 0800. The trailhead was pretty easy to find. Although I am from Gold River, I never did notice the small white sign on the left side of the road after Lady Falls that read "Kings Peak" pointing down a gravel road. From the turn off the highway we drove about 1 km and parked at the end of the road. By the time we parked and packed on our gear it was 0800 pretty much on the dot.
We walked around 20mins or so and arrived at another road under some power lines and came to a very beautifully made sign letting us know we were on the right path. The route we took was the "summer route". It is not technical and no climbing gear required. 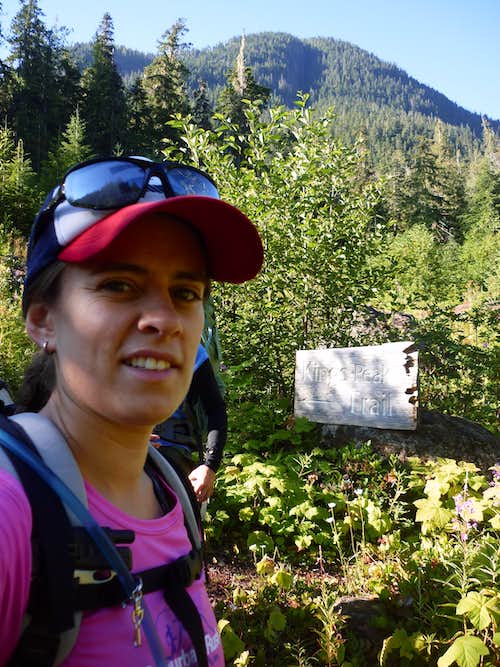 Kings Peak trail sign.
The bottom section of this trail is very well maintained and consists of switchbacks through large beautiful old growth. There is even a nice bridge over the first creek crossing. At a few points we found ourselves crawling on hands and feet up steep root beds and rock bluffs. You certainly gain a lot of elevation in a short period of time. The trail is rarely flat... Along the bottom section there is also a beautiful waterfall, which is a good place to take a quick break. I believe it took us just over an hour to get to this point. 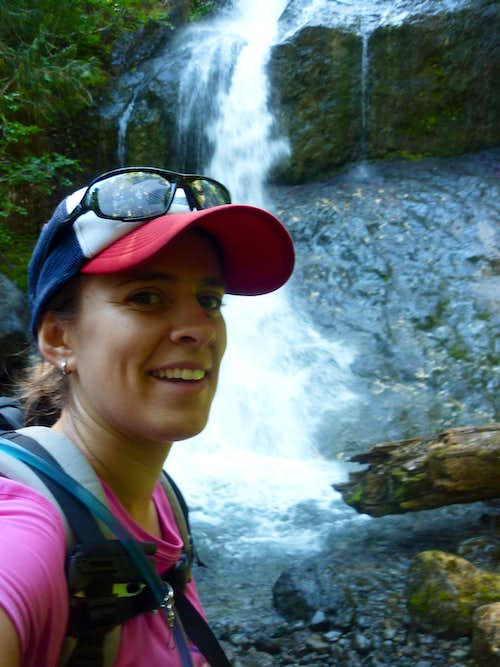 After crossing the creek around 3 or so times we arrived at another small waterfall and had to hop across the creek to the East. From here the trail gets a wee bit sketchy. The trail becomes a small dirt path up the creek canyon. The gravel we were walking on was very loose and it was easy to knock rocks down at my girlfriend following behind. A couple times our dog got ahead and sent some rocks tumbling towards us... We found the safest way to ascend was to stick as close to the creek as possible rather then taking the high route and risk tumbling down into the creek below, which I noticed a few boots had attempted.
At 1120, or just over 3 hours from the trailhead, we arrived at the meadow. It is beautiful. From here we could see how we would ascend Kings Peak following the ridge. We took a break, set up camp, and made a food cache. After about an hour we continued on with lighter day-packs, fresh water, and snacks. It took probably 15 or 20 minutes to get up through the meadow to a steep gully that is slow going and again put us scrambling up on our hands and feet. 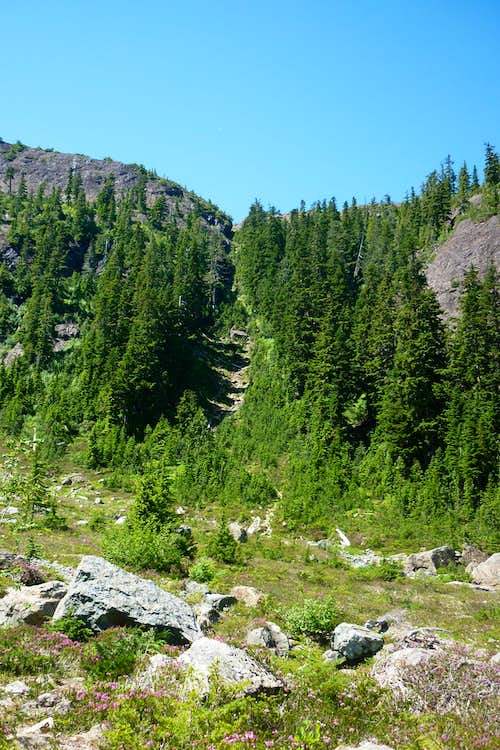 The steep gully
Once we got to the ridge it was probably the flattest hiking of the trip. The trail was no longer continuous, but it was quite well cairned. So many amazing views once we reached this point. 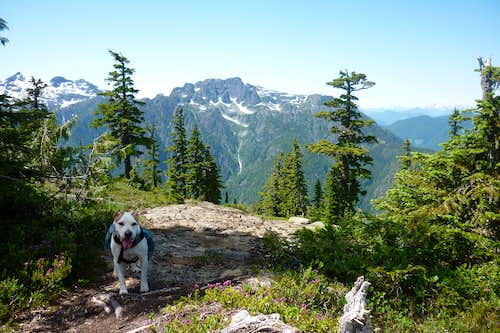 The top of the steep gully
The route we took was along and up to Queens Ridge, which I realized later that we could have skirted around and avoided elevation gain and loss. Once we wrapped around Queens ridge we got some amazing views of the Island's greats: Elkhorn, Colonel Foster, Rambler Peak... Also, we could see Landslide lake covered in snow way below us. We arrived at the summit at 1450. Here we spent probably 50mins or so taking in the phenomenal views before heading back to camp. 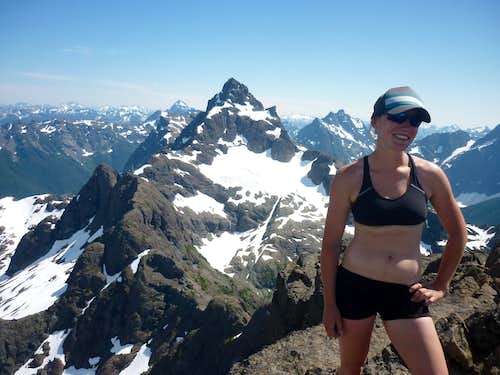 The summit with Elkhorn and Rambler Peak in the background. The Golden Hinde off in the distance to the south/east.
On our way back down we ran into two guys that said they had been "man tracking" us all day... Haha. I did mention a few times to my girlfriend that I thought I heard voices... These boys hiked their packs up just below Queens Ridge to avoid the bugs. Phew, that must have been tiring. 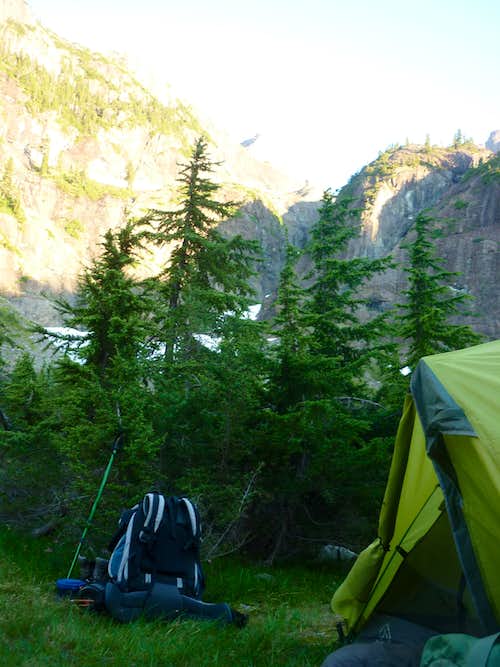 Meadow Camp
We arrived back at our camp at 1745. It felt great to finally take off the 'ol hiking boots and relax. Here my girlfriend really noticed how sunburned she had become... I had given her what I thought was sunscreen before we continued up the Kings Ridge... Apparently it was only bug repellant cream... Oops! As you can see we weren't wearing much for the last bit of our hike... The weather was probably around 28 degrees still and the snow melt creek to the East of the meadow was refreshing. Not far up the creek there was a snow cave! Very cool. 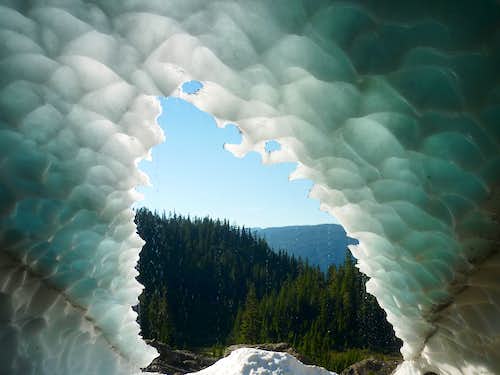 Snow cave
The next morning we had our usual hiking breakfast of oatmeal and coffee before descending back to the car. We left at around 0900 and were back at the car by about 1120. Here we took a short drive to Upper Campbell Lake and hopped on in to cool off before driving back home. What a great hike. I would recommend it to anyone. Maybe next time we will camp in the meadow and do Elkhorn as a day trip from there via the saddle from Kings Peak....
Here is a link to a video I made of the trip:  https://www.youtube.com/watch?v=KcY-TZ6RVFM