Mt Angelus is a short but spectacular objective from the Angelus Hut in the Nelson Lakes area of the South Island of New Zealand. Many folk visit the hut as part of the Travers/Sabine circuit. Far fewer people, however, make the trip up Angelus and my intention was to use the hut as base to climb the mountain and then return to St Arnaud along the high, scenic Roberts Ridge route.

The weather on February 22nd didn’t look that great and neither did the weatherman hold out much hope for an improvement but I shouldered my pack in the St Arnaud carpark anyway and prepared to make the 10 km walk south down the east shore of Lake Rotoiti to the Lakehead Hut. From there the Travers River may be crossed to its west bank, the one I needed to be on. Just as I was about to leave, however, I could see that a water taxi was about to leave also and that it wasn’t full. Bottom line: $15 got me to the Coldwater Hut at the end of the lake and on the correct west bank. Good job – the river was too high to cross at the Lakehead Hut and DoC was advising everyone to cross on the bridge 5 km upstream. What a stroke of luck!

Feeling suitably pleased with myself the walk down to the junction of the Travers and Cascade Tracks passed in a flash and I was soon headed west on the latter as it followed the rushing Hukere Stream up the valley towards Lake Angelus.

The weather had been better than expected up to this point and the sun had even made a couple of brief appearances but as I neared tree line the temperature dropped and the heavens opened. At noon I had a brief and soggy lunch in the last trees before starting the long plod up to the alpine basin above. After an hour my gortex armour was showing a few weaknesses and if I stopped I got seriously cold. How relieved I was now to have happened across that water taxi.

About an hour below the hut things got quite serious. The track crossed the Hukere Stream at the only feasible point below Lake Angelus and whereas it wasn’t exactly a whirling maelstrom, it was certainly a very dangerous crossing, right above a 10 metres high waterfall. In better conditions I would probably have turned back but with shelter less than an hour away, I decided that the risk was worth it, put on my tevas and stepped gingerly into the flood. The current was as strong as expected but I inched my way carefully across and was soon on the other side. A bit more uphill plodding followed until the hut finally appeared through the sheets of rain. I stepped gratefully inside to find a roaring stove and plenty of spare bunks.

The evening passed with all the usual hut bonhomie. I was inveigled into a game of Scrabble, soon established my usual hand of 6 A’s and a Q and slunk off to bed soon after. It was snowing when I got up to answer nature’s call at 3 am.

Next morning dawned to pouring rain and zero vis and I resigned myself to a hut day. By late afternoon a few breaks appeared and I could finally see what a lovely location the hut was in – right by the lake and ringed by alpine ridges. There seemed to be better prospects for the following day, although the hut warden thought not. 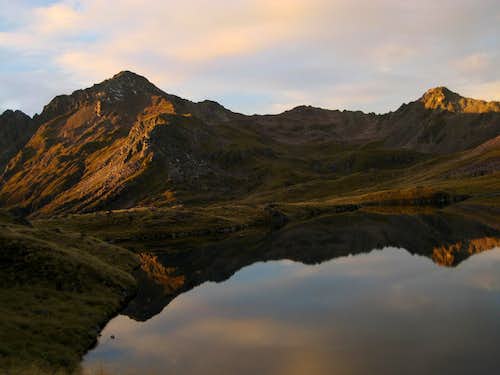 Mt Angelus at dawn
In fact the morning of the 24th dawned crystal clear and frosty and there, finally, was Mt Angelus to the south mirrored beautifully in the lake.

By 8 am I was off along with chance-met Sarah from the UK. We made short work of the approach SW down to the Hinapouri Tarn and onwards on the same line up towards Sunset Saddle. Rather than go all the way into the saddle, however, we traversed off to the south to intersect the west ridge of Angelus and continued up this with a little Class 3 here and there to the top. Long before we got there - you guessed it - down came the clag and gone were the summit views. A glimpse or two of the Travers River over 1,200 metres below appeared and that was about it.

After half an hour waiting for clearing we gave up and headed off down the northeast ridge briefly before dropping off the ridge and down the friendly scree slopes of the north face directly to Hinapouri Tarn and on to the hut.

On my final day I got up to a spectacular sunrise and was already hiking just after 6 am well before anyone else was up.
After an initial steepish climb up from the hut my route took me northwards up and down and along high Roberts Ridge to the west of Lake Rotoiti and with wonderful views in all directions. About 2 hours along the ridge, just after the contour around the west slopes of Mt Julius, I stopped for a break and sat down facing south. There before me was the sort of view of Mt Angelus that people wait for years to photograph! I dropped my water bottle, grabbed my camera, brought it up to my face and looked through the viewfinder. CLOUD – just bloody CLOUD. And that was that.

I completed the rest of the hike in the mist until finally dropping out of it in the last hour. From the Roberts Ridge/Pinchgut Track trailhead I bummed a ride round to St Arnaud from a friendly group of Kiwis (are Kiwis ever anything else but friendly?) and reached my car at noon.

Many thanks. And congrats on your superb PoTW.