This mountain is located at the eastern end of the Zillertal Alps near the connection to the Hohe Tauern at Birnluecke pass. It is part of the main ridge of the Alps and the watershed between the Adriatic Sea (rivers Etsch/Adige – Po) and the Black Sea (rivers Salzach – Danube). More upon name and history later.
From the summit a ridge branches to the north that runs to Schlachtertauern mountain (2754m) and that separates the Krimmler Achental valley from its side valley Windbachtal. To the west the near Pfaffenschneidkopf (2918m) blocks the view down to and from the Ahrn / Aurina valley.

Distances to the south are short and from this side a marked route leads to the summit – so most visitors come from south. To the north long valleys lead to Krimml, the first village on Austrian side.

Northwest of the mountain is Schattseidkees glacier, northeast is Klockerkarkopf glacier. But there is not much ice left in these hot times…

Its position between the Venediger Group and the Zillertal Alps makes it worthwhile to climb Klockerkarkopf / Vetta d'Italia. Especially the view from its balcony onto the glacier-covered 3000m peaks from Grossvenediger to Roetspitze is spectacular.

For the common normal route from Italy:
Trailhead is the village of Kasern / Casere (1595m) belonging to the municipality of Prettau / Predoi in the upmost part of the Ahrn / Aurina valley. This valley is the prolongation of the Tauferer / Tures valley that starts at Bruneck / Brunico in the NE part of south Tyrol. Bruneck / Brunico can be reached via Brixen / Bressanone, Cortina d'Ampezzo or Lienz in Austria

For the north routes from Austria:
The place to go is the village of Krimml (1067m) in the upmost valley of the Salzach river – famous because of its waterfall which is the highest in Europe.
This is to reached
- from Innsbruck via Gerlos pass
- from Munich via Kitzbuehel and Pass Thurn
- from Salzburg via Bischofshofen – Zell am See
visitors coming from south first have to cross Felbertauern pass or Brenner / Brennero pass

Climbing the mountain is possible in a long daytrip from the village Kasern/Casere (1614m). But it is less strenious if you stay at the following hut:
Rifugio Tridentina / Birnlueckenhuette (2441m), 3 h ascent on marked trail from Kasern / Casere

For accomodation in the valleys you might look for a hotel or bed&breakfast at:
- Ahrntal - Prettau
- Krimml 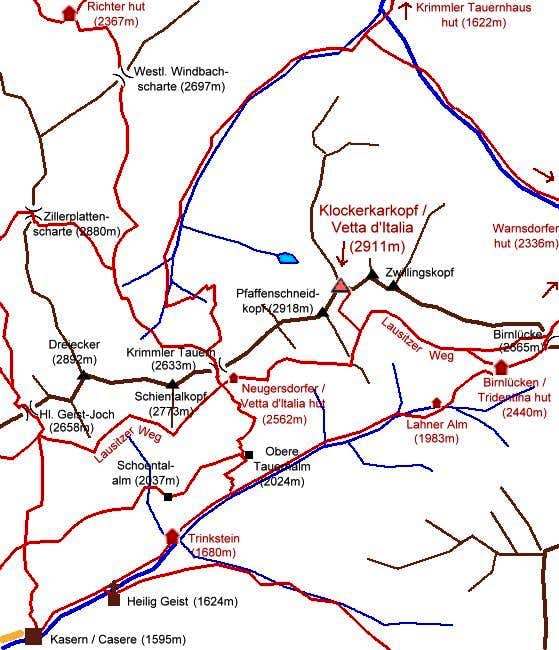 The normal route to the mountain is a marked path, very steep with some loose rocks in the upper part, secured by some pieces of rope, suitable for an experienced hiker in good summer conditions;
5 h from Kasern via Neugersdorfer Huette
2 h from Birnluecken / Tridentina hut

Other routes are not common. My guidbook lists:
- from NW over Schattseidkopf glacier (or what has remained of it): 5 h from Krimmler Tauernhaus, UIAA I – this is better done with ski!
- From N from Schlachtertauern mountain, 3 h, UIAA I, on the right side of the connecting ridge. But Schlachtertauern mountain has to be climbed first in 4 h from Krimmler Tauernhaus, 4 h, UIAA I. No marks, no trail. Here you will surely be alone…
- Traverse to Pfaffenschneidkopf (2918m), 15 min, UIAA I. Along the ridge, some blocks. There you gain the better viewpoint for the Ahrn / Aurina valley.

plate on the summit
This is a "political mountain" – because it is (nearly) the nothernmost mountain of Italy!

Until 1919 the whole south tyrolean area was part of Austria. As we all know, Germany and Austria started the First World War in 1914 and lost it in 1918 while Italy was among the winners. Though the battles in the Alps had claimed many victims – more because of avalanches and other winter dangers than because of fighting – there had not been major territory gains. But then at the peace talks in France the lands were distributed.
To claim southern Tyrol for Italy an Italian politician named Ettore Tolomei had already made a map where he translated the original German names into Italian to prove that this would be Italian property – because he was convinced that the natural border of Italy had to be the watershed of the main ridge of the Alps. He had found out about Klockerkarkopf as the northernmost mountain of this watershed and made an "expedition" in 1904 where he claimed to be the first climber and named the mountain "Vetta d'Italia" (= head of Italy). The allies believed, and the treaty was signed.
Who knows how Germans/Austrians would have acted if they had won?

No one serious wants to change borders in central Europe today as all parties belong to the European Union. The Ahrn / Aurina valley is a popular holiday destination for Italians, Austrians and Germans. But it is still a political topic in South Tyrol if the Italian names of the mountains in general and Klockerkarkopf / Vetta d'Italia in particular should be preserved.

If you look carefully at a map you will notice that east of the mountain the ridge spreads a little more to the north – there is the true northernmost point of Italy, called Westlicher Zwillingskopf (2837m).

Claude Maugier points out that also the existing german names are a product of history. He writes:
The Ettore Tolomei semantic disaster spread all over the Bolzano/Bozen province...This attitude of his, has to be compared to other post WW1 political changes in Europe : almost everybody started a kind of delirium campaign in order to legitimate a strictly determinated and limited in time and space historical situation. This was a typical nationalistic XIX th century concept. These territories, before the Roman period, were occupied by Rhetians, with various celto-ligures dialects spoken here and there. Once latinized (partially), this territory saw an increasing proportion of German population settle between XIII th and XIV th centuries (among which a good proportion of Saxon miners, specialists in iron and silver metal works), thus modifying once more the spelling and the writing of place names. This was also the period during which what we know as "family names" started to be fixed and officially written (by the catholic church), as well as cadastral limits. In many occasions the "true" names are just impossible to identify without a good amount of linguistic work, provided that sufficient material remains !
Just two examples. A mountain named by Tolomei "Cima Dura" (hard, tough summit...!), was the former german "Dureck", which is simply a former Rhetian "Dur-eg" = the place where the water comes from. In the middle Etsch-Adige valley stands the village of "Gargazzona" (Gargazon in German), and nobody knows today that it simply designates a "Kar-Cassanos" = "oak hill" (like Carcassonne in southern France). The latter is already a mixture of celtic and pre-celtic terms. But Celts (and Romans) were pragmatic people and understood nothing about nationalism... If an old name was already available, they included it into their "place names files". And EU is an excellent opportunity to reflect about this. We are all from the same old families.

A variation of the german name is "Glockenkarkopf" that can be read often, even in some maps. But is seems to be a derivation of the original name "Klockerkarkopf".

The area around the mountain was – before WWI - labour area of the sections of the German alpine club in eastern Saxonia (called "Lausitz"). These mountaineers built the Lausitzer Hoehenweg hiking trail that helps very much to approach the mountain. They also built a mountain hut near Krimmler Tauern pass, called Neugersdorfer hut. My relatives come from this town in Saxonia so I have a personal relationship to it. After WWI borders between Italy and Austria were closed and since then the hut is property of the Italian state that runs the hut as a station for Italian finance police. As there is not much use for police in this peaceful mountain area in central Europe I still have the hope that the hut can be used in the future as a mountain hut as it was supposed to. The trip to the hut is a worthy daytrip, the views to Dreiherrenspitze / Picco dei Tre Signori and Roetspitze / Pizzo Rosso are astonishing and there is a lot of "hiking traffic" in the upper Ahrn / Aurina valley in summer time.

Another little hut – called Lausitzer hut – was built at the very summit of Klockerkarkopf, but as time went by it went to ruin.

Krimmler Tauern pass (2633m) is west of Klockerkarkopf and can be visited in addition. Over this mountain pass leads an old historic trade route that has been used since the times of the Celts app. 2000 B.C. The old historic trail that had been built by the Romans can still be seen and is used for big parts of this route.
Krimmler Tauern is also the highest point in the - at least Eastern - alps to be crossed regurlarly by cows: the – Italian - farmers in the Ahrn valley are owners of some pastures in the northern – Austrian – Krimmler Achental valley. In June and October when this "cow trek" is done there is normally much snow on the route!
Krimmler Tauern pass is also popular for (mostly German) mountain bikers on a trip crossing the alps from north to south – though the bikes have to be pushed for several hours.

The first ascent was made by Dr. Fritz Koegel on July 10th 1895 who did basic explorations in the area and who wrote an extended article about the eastern Zillertal Alps (Reichenspitzgruppe) in the yearly book of the German-Austrian alpine club, ZDÖAV 1897, 188. Maybe this was not known by Ettore Tolomei when he climbed the mountain with his party in 1904 and claimed to be the first. Later he was interpreted as he was the first Italian to reach the summit.

Other mountains have been climbed decades earlier for the first time – but the area around Klockerkarkopf just seemed to be not important enough. state border at Birnluecke pass
there is few for the parking lot in Kasern / Casere if you arrive there after 8 a.m.
In Austria there is a fee for using the panorama trail along Krimmler Wasserfaelle. The northern / Austrian side of the mountain belongs to the Hohe Tauern National Park, but this does not restrict climbing activity.

Otherwise there are no restrictions - even not at the state border.

September
July to September/October depending on snow conditons

Winter: Klockerkarkopf is a destination for a medium hard ski tour from north, with basis at Krimmler Tauernhaus. But I don't have a description. The route runs into the Windbachtal valley and branches off to climb the mountain from NW side.
The summer route from south is too steep to be done with ski.
Kasern / Casere is a great destination for ski tours though not to Klockerkarkopf. Krimmler Tauern pass and Schientalkopf west of it are a worthwile ski tour.