By the end of the summer of 2016, I decided I'm going to try visiting all European country highpoints. For years leading up to this, whenever I went to an area, country or mountain range, I felt attracted to its highest point. If I could get up there, I wanted to, hiking or climbing if necessary. Perhaps my decision last summer wasn't really a conscious one, but just an acknowledgement of what I was all along: a highpointer. 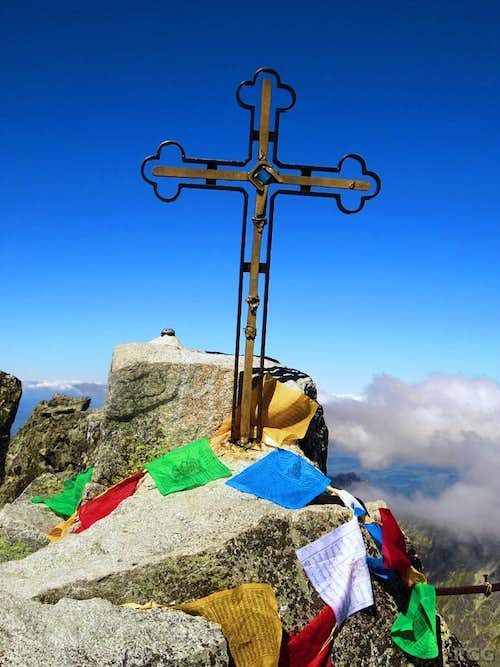 Gerlachovský štít summit cross
After climbing this one, I made my decision
Almost a decade earlier I went to Luxembourg on a hiking trip. Before hopping on the train, I looked for information and learned that Kneiff is the country highpoint. I also read about some of the confusion surrounding it. Years later, after joining SummitPost, I was surprised how little information the site had about it, and some of it was plain wrong as well. However, because I had few pictures, I didn't feel inclined to write a page about Kneiff for I couldn't illustrate it very well.

However, after admitting that I'm a highpointer and realizing how important it is to have accurate information, I changed my mind. For some countries the highest point is easy to find even without a map. It's hard to make a mistake about a pointy summit with a cross on it. But Luxembourg is different: it is one of a group of countries for which finding the actual spot is the most challenging aspect of visiting it - and so I created this page to make this easier for others.

Satellite view, with green paddle marking Kneiff
View Larger Map
Kneiff isn't really a mountain, let alone a rock. Not much to look at, and no spectacular summit views. A decent picnic spot perhaps, nothing more. But it happens to be the highest point on the Ösling plateau in the north of Grand Duchy of Luxembourg, and that makes it the country highpoint.

Kneiff lies in the municipality of Troisvierges, in the north of the country, less than half a kilometer from the border with Belgium. In fact, as Luxembourg is a small country, the nearest border is never far away. The furthest is the French border, not even 80 km to the south.

It's not long ago that Kneiff was determined to be the country highpoint. For many years, nearby Burgplaatz (1.07 km west by northwest of Kneiff) was considered the highest point. There is even a tower there, with a sign next to it that still claims it to be so. New measurements by the end of the last century showed otherwise. The history is very well described in the (French) article "Le point culminant du Luxembourg" by the state topographic service, and it includes a very detailed topographic map of the area pointing out both Kneiff and Burgplaatz. 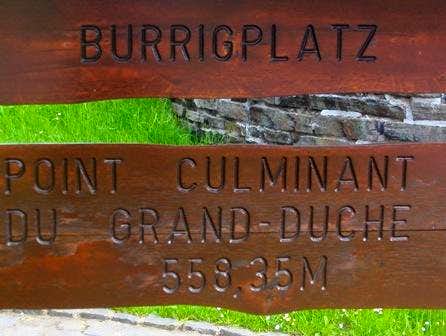 Wrong sign: Burgplaatz is not the true HP of Luxembourg!

Small as it is, Luxembourg has no less than three official languages: French, German and "Lëtzebuergesch", the latter being a German dialect. As a result, geographical names often appear in somewhat different forms. In addition, spelling has changed over time, so different sources may give different names, adding even more to the confusion.

Where Is It Exactly?

The white-on-red star marks Kneiff. Click on a symbol for more information
The main reason - and perhaps even the only one - to go to Kneiff is to visit the country highpoint. Because the area around it is a flat plateau, it is quite hard to find the actual spot without a good topographic map or GPS-device (and knowing the coordinates). Fortunately, there is an excellent scale 1:5000 one by the Luxembourg "Administration du cadastre et de la topographie", i.e. the cadastre and topographical administration. In addition to the static map mentioned above, the Luxembourg geoportal provides a very detailed interactive map (I have no permission to embed it here, otherwise I would - just follow the link instead). 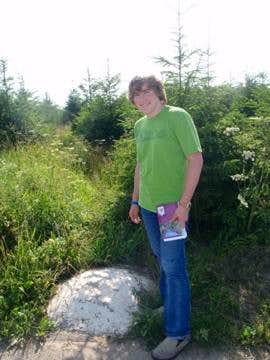 Andrew Rankine at the benchmark
As both the static and dynamic map show, there is a survey benchmark (◬ on the maps) alongside the road (50.15769°N / 6.03718°E). It has "Kneiff 559" written on it. Browsing the web, I came across a number of trip reports of people that visited this benchmark, thinking they were on the country highpoint. I presume that seeing the name Kneiff on the benchmark had something to do with that.

However, a closer look at either of the maps makes it clear that the highpoint is not by the road, but a little further south, and it is not 559 m but 559.8 m. And even without this map, looking south from the roadside I couldn't escape the distinct impression that the terrain is higher. According to the map, the true highpoint lies 44 m (±1 m) from the marker, heading 200° (±5°). It's a farmer's field, so the exact location is impossible to determine, and might even change each time the land is worked. As long as the tree is still around, just walk towards it from the benchmark and you should go right cross it. 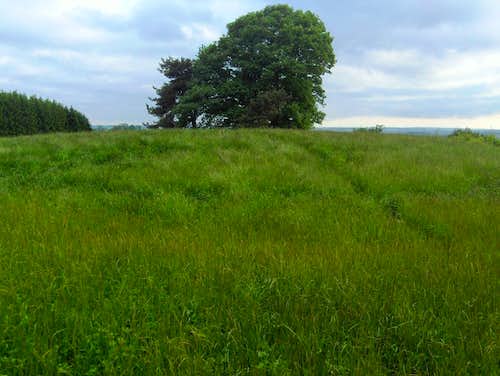 Kneiff, the true HP of Luxembourg, is on a farmer's field between the road and a tree

At the border at Schmëtt, the N68 becomes the N7. Follow it in the direction of Wemperhaard for 3.2 km, then take the turnoff to the right. The benchmark is another 200 m up the road, on the right.

When entering Luxembourg at Wemperhaard, there is a roundabout immediately after crossing the border. Take the first exit, the N7 towards Huldange (and Schmëtt). Follow for 1 km, then take the turnoff to the left - same road as above. Again, the benchmark is another 200 m up the road, on the right.

From the south, the A7/N7 connects Luxembourg, the capital city, to the north. At the Wemperhaard roundabout take the second exit to continue on the N7 towards Huldange (and Schmëtt).

From the southwest, the N12 coming from Troisvierges leads to the same roundabout. Third exit.

The nearest train station is at Troisvierges. It's a 5 km walk from the station to Kneiff, starting out along the N12 to Wemperhaard, to the northwest.

From Schmëtt bus 555, direction Ettelbruck, stops at Knauff, a restaurant close to Burgplaatz (only 2 minutes from Schmëtt). The tower is just over 400 m west by northwest of the bus stop, along a small road. For Kneiff, walk 600 m east along local road N 7. Take the turn off to the right, heading south. The benchmark is another 200 m up this road on the right.

Bus 686 connects Troisvierges and Sankt Vith, Belgium, passing within 250 m north of Kneiff. The nearest bus stop is at Wemperhaard - Braken (13 minutes from Troisvierges), from where it's just over a kilometer to the turnoff from the main road. Coming from Troisvierges, the bus continues to Vith via Knauf, but normally does not stop between Wemperhaard and Schmëtt - I suggest checking with the driver. 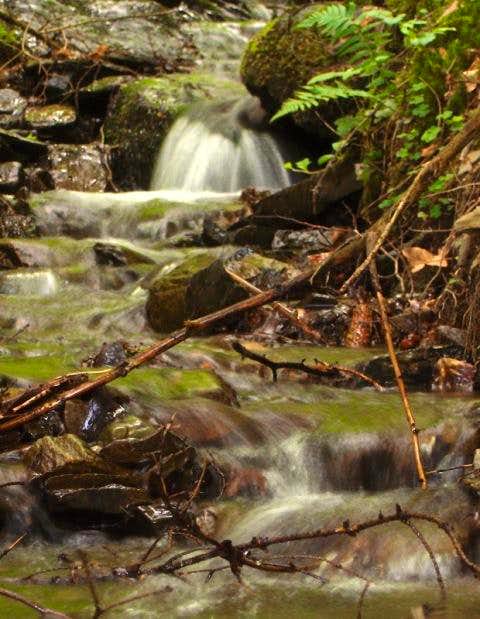 A tiny tributary to the Our provides fresh looking water. Good to drink - after purification.
Overall population density in Luxembourg is high. However, most people live in and around the capital, and the north is rural. Consequently there is limited choice of accommodation there.

I had been hiking for a few days, mostly following the scenic Sentier d'Our (which translates to Trail of the Our - the river Our defines part of the eastern border of the country, with Germany) and planned to stay at the large campground at Weiswampach. However, when I arrived, shortly after 6 pm, the reception was closed for the day. No real problem though, for there was still plenty of daylight, so I filled my water bottles, kept on going and reached Kneiff a day earlier than planned.

By car, by bike and even using public transport, you can easily get anywhere in the country. And Belgium is close by, with the Belgian country highpoint beckoning not all that far north. 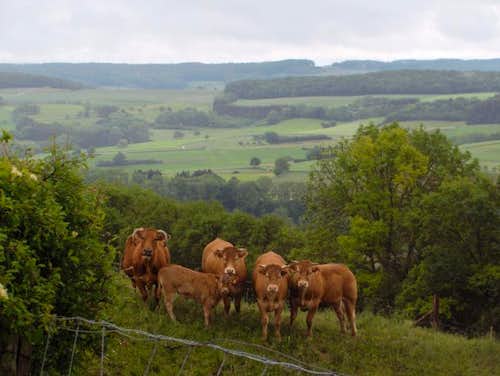 Typical rural view in Luxembourg (this isn't from Kneiff)