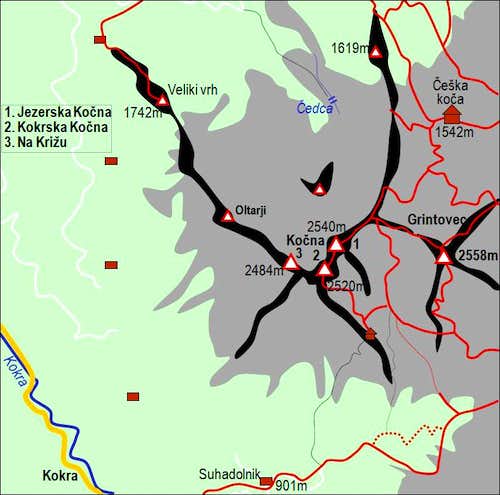 Moonhiker - the E ridge from the top
The grading system for hiking and scrambling routes is here.

0. General. From 900m to 2540m, some ups and downs below the south face of Grintovec. Predominantly good marked paths, on some places secured with pegs and steel ropes. Paths also require a lot of care as the terrain is crumbly and not all exposed places are secured. Gear: Good shoes and poles.

On the ridge
From the southern side, from Suhadolnik farm, there are a few possibilities to reach the summit of Kočna. None of them is direct though. On a separate route page I described the 'Direct south scramble', which ascends fairly directly on the second highest peak - Kokrska Kočna. On this page I will describe the routes which all reach Dolci valley - between Kočna and Grintovec - and from there go on top from the eastern side (by the east ridge). Two of these routes are marked while the third one is a hard direct ascent in Dolci valley by abandoned shepherds paths.

Driving up the Kokra valley you turn right at the end of Kokra village (scattered houses) and drive up the narrow road to Suhadolnik farm (902m). You can park there freely, but we usually leave some small money in the box. Otherwise a bigger parking place is on the last road curve below the farm.

From Suhadolnik farm you proceed eastwards by a marked path which soon cuts through the woods and reaches the forrest road again on the beginning of Suhi dol meadow, 1000m. Here it is possible to go directly northwards and reach bivouac by an easy climb (Direct south sramble), but we shall proceed by the marked path. This goes again in the woods, proceeds eastwards and so reaches the place, where the valley is closed by a 200m high rocky step, called Taška. Here the paths branch. 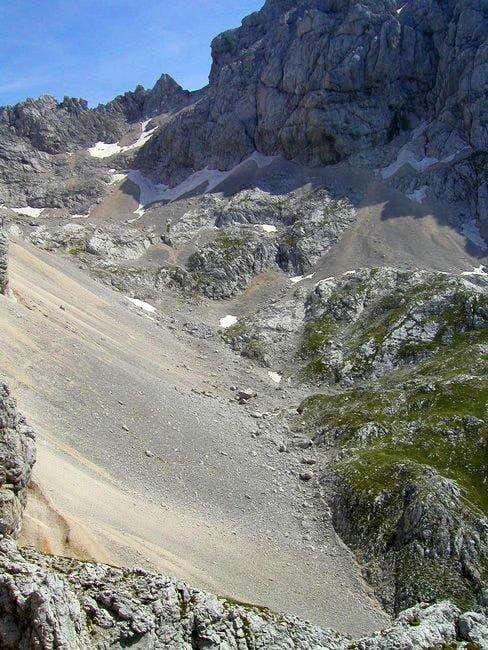 Bor - In Dolci valley
1. Direct Shepherds ascent to Dolci valley. From the place where the marked path crosses the dry creek bed, we continue straightforwards till the end of the vally. The cart-road ascends left over the slope, it branches a few times, but we allways keep right. After some 15 minutes above the creek bed the cart road finally turns sharp left - away from our route. There we go directly up (slightly towards the right) almost till the end of the ravine between Kočna and Grintovec. The main ravine is however closed by a steep rocky step, so we tahe the secondary ravine, left of it. It is grassy, we may even find rests of a tiny path up there. In some 10 minutes we reach a rocky rib and continue up by a steep and unpleasant grassy slope. This part might be detoured also by a passage even more to the left. On top of the ravine we finally turn right, take narrow and exposed ledges which leads us accross the slope (or even a bit down) and around the edge so reach tehe lower part of Dolci valley. We are close to the rocky abyss above the main ravine. The hardest part of the ascent is behind us. On the left is a cave in the rock where more than 100 years ago Suhadolnik's shepherd was spending summer. From this place we go direcly up the valley, by steep grassy slopes, intermitted with rocks. It is still more or less a pathless terrain. Finally in the middle of the valley (Srednji Dolci) from the right the marked path from above Taška joins us - see the approach #2 below.

2. From above Taška. The second approach into Dolci valley (Srednji Dolci) goes from above Taška step. But also over Taška two ascent variants go - they are both marked.

2.a. Directly over Taška. The original path climbs the Taška rocky barrier directly. It is far more beautiful than the new route which goes right around. From the cart-road marks lead us across the dry creek bed and then towards the rocky step. The path goes by the right edge of the ravine until it reaches a small cave in rocks. There the steepest part begins. Steel pegs and cables lead us directly up, then the path turns right and steep wooden steps help us get up. Above, the narrow path crosses the steep slope. In this part it is already quite panoramic - we have a nice view on Kočna, the summit on which we go, but in this section the rout is going away from. After crossing another ravine the path does a few turns up and exits on the comfortable second variant, coming from the right. Now the path is broad, it crosses the slopes and the ravine of Suhi dol, beyond which we soon reach the lower meadow, where once a shepherds hut was standing (and the old Frischauf's hut - today in ruins).

2.b. The new route over Taška. Afters crossing below the dry creek bed, the new route deters right ans ascends in turns through the woods. We are already on the slopes of Kalški greben, then the path starts crossing these slopes to the left and finally reaches a rocky ravine, full of boulders. A few minutes we continue upwards the ravine, then the path exits it left out and in steep turns goes up. The upper part is also a bit exposed, but the path is well protected. After gaining enough altitude, the comfortable path crosses the slopes almost horizontally, from the left the direct variant joins us and we continue across the main ravine to the lower meadow in Suhi dol.

By both variants we need till this meadow some 1h 30min.

On the meadow we must deter left (towards the north)! The main path to Kokrško sedlo (saddle) and Cojzova koča (hut) proceeds by the valley up - eastwards and is far better marked. 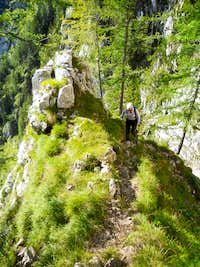 bojana - Grdi graben path
From the crossroads we can only hardly follow the marked path. Not many people go here and it also soon becomes narrow and exposed. Steep rocks of Grintovec south slopes rise above the path and it also goes up and down on a few places. In Grdi graben we lose some altitude, so on the other side we need to gain it again. Then the path is crossing the steep slopes of Grintovec and on the most exposed parts it is also protected. Finally it reaches the bottom part of a broad valley between Grintovec and Kočna (Dolci). We are on the place where routes #1 and #2 join. From there we continue up the valley.

3. From Kokrsko sedlo (saddle) - Cojzova koča (hut). This is in fact no more the southern ascent, but as it joins in Dolci the ascents described above, we shall mention it. From the saddle the broad path goes on the summit of Grintovec. Reaching the lower part of its roof we come an a crossroads. Right we can go on top of Grintovec, continuing left the path descends into Dolci valley. We again lose some 200 meters of altitude. We are still in Srednji Dolci (Middle Dolci), all paths came together here.

On this place paths are branching again. The left variant uses a narrow ravine and ascends on the shoulder in Kočna south ridge, where the bivouac stands (1952m). From there the marked path ascends northwards by scree, then crosses it in the west direction, enters easy rocks (secured with ropes and pegs) and in easy climb reaches the summit of Kokrska Kocna (2520m). The main summit of Jezerska Kocna is still some 300m towards the NE. The marked path goes by the ridge or little below it (secured) and reaches the main summit in good 15 minutes. From Suhadolnik farm cca 5 hours. That route over the bivouac was more in detail described in 'The Direcs South Scramble' route and is not our primary interest here. 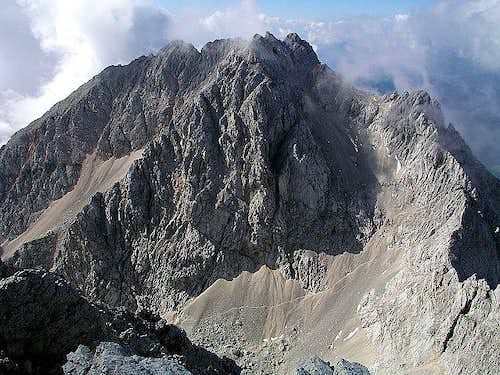 The summit part of Kočna - the descent over screes is nicely seen
The summit ascent.
The other variant doesn't touch the bivouac. It proceeds northwards by the broad Dolci valley and climbs on its end on the Dolška škrbina (notch), 2270m (actually a bit left of it - we reach the ridge a few meters higher). Here we are first time impressed with the north walls shadows. This is the place where the northern approach (Kremžar Route) joins us.

Now one route leads to the summit of Kocna - the east ridge of Kočna is awaiting us. 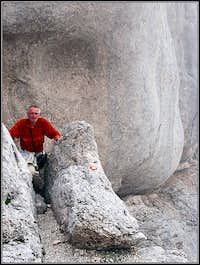 At the 'belly'
At first glance the huge, rounded walls will not allow us any passage. But on the most tricky part a shallow ledge leads us under rounded 'bellys'. Most of mountaineers here push their rucksacks in front of them, also if you go more on the outer side, the passage is not easy. But difficulties are soon over and a comfortable ledge leads us further towards the West. Only at the end we climb a little, gain the main ridge and over a ravine again proceed south below it. Finally climbing upwards brings us to the highest point. From Suhadolnik farm cca 5 hours.

Descent.
To descend in Dolci you can use the big scree field, which steeply descends almost from the main ridge. After climbing down from the summit rocks, we slide carefully by screes down. On top they are steep and have also one narrow part where quite some care is needed. But in any case a better variant than going under the 'belly' by the east ridge. Provided, that on the other side your rucksack is not waiting for you.

On the summit of Kocna take care of lightning. Red rocks indicate quantities of iron, which is very dangerous in bad weather.