It was the month of July, and it was perfect for a monsoon trek. Nobody responded to the messages I sent across on whatsapp, but Vinod Mahadik. My old climbing partner, and with whom I have several memories – first climb, Lingana, first Himalayan climb – Thelu, and the Basic course in Mountaineering. 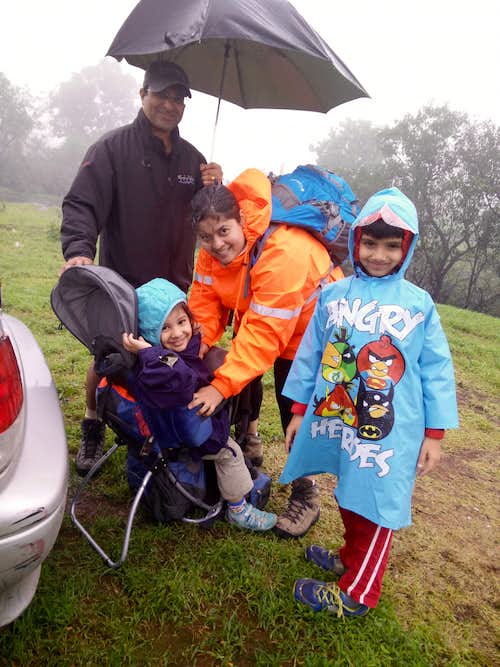 Getting Ready for the hike

He said, he would be coming along with his wife and daughter. I knew from my research that the fort wasn’t a tough one, and one could easily climb it. I didn’t know of any tricky patches and what we would do, if we encountered any of them. But, anyway – we took a chance, as he said that he has the carrier, in which he would have his daughter sit, and he and his wife would take turns carrying her. 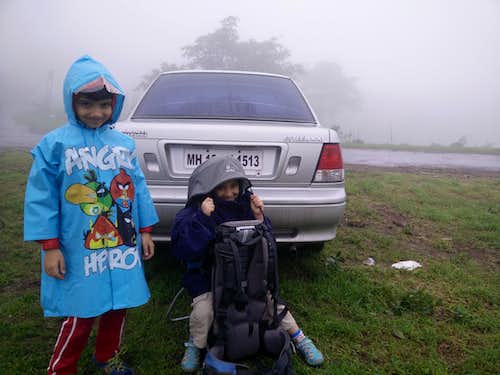 Yuvaan and Ms. Mahadik
My car wasn’t available, so we decided to take Vinod’s car. His car is quite an old one, but he assured that it would easily to past Lonavla and come back, as the entire road was paved.  We took off from Pune at about 8 am in the morning, and went straight to the base of the fort, past Lonavla. 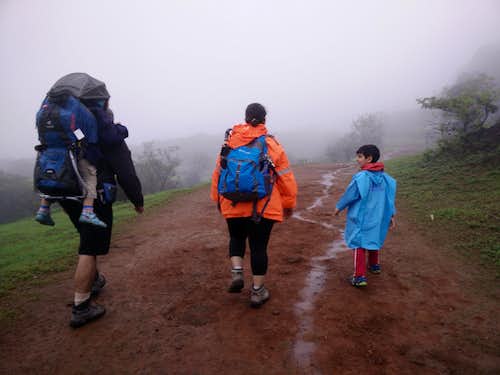 Hike Starts
Instead of taking the expressway, we took the old Pune-Bombay highway, which was as pretty as ever – in its full green glory! Streams were running down the mountainsides, and all the mountains had a thick cover of green trees. 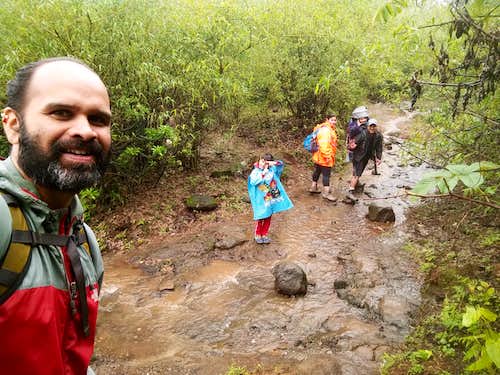 We reached the base, got our rain gear out, as it started raining. I made Yuvaan cover himself up in a Poncho, and I used my jacket. Vinod and Gayathri covered themselves up, and put their daughter in the carrier. We set out on the trail, which we initially had to find. But, it wasn’t hard, and after we asked a couple of people around, we found the headstart.

Streams were running down from everywhere, and we could see Korigad in the clouds, and I wondered how the steps were carved out to go to the fort. It wasn’t long before all our boots / shoes had gotten wet, and we were stamping our way through muddy waters, with rain coming down in full force. Fortunately, we had everything packed in plastic bags, inside our sacks, so nothing got wet. 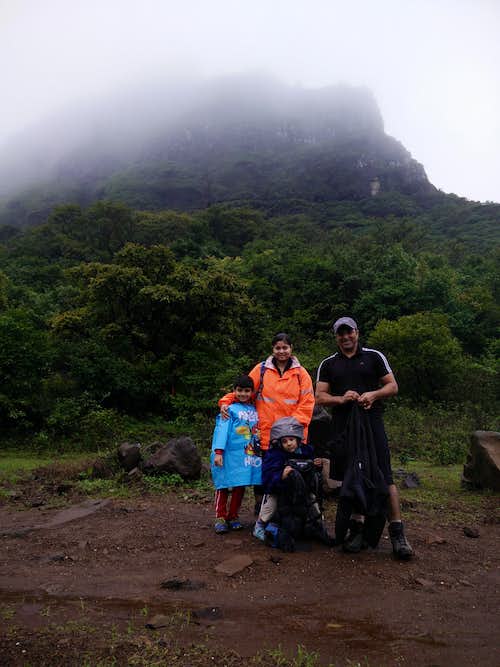 At the base of Korigad

Yuvaan had a great time marching up the trailhead, and we reached a point where there was a temple, after which steps which were cut in rock, started. And, it was so nice to see almost the entire stream coming down the stream! We just had to be a little cautious, as there is always a high chance of slipping on such rocks. 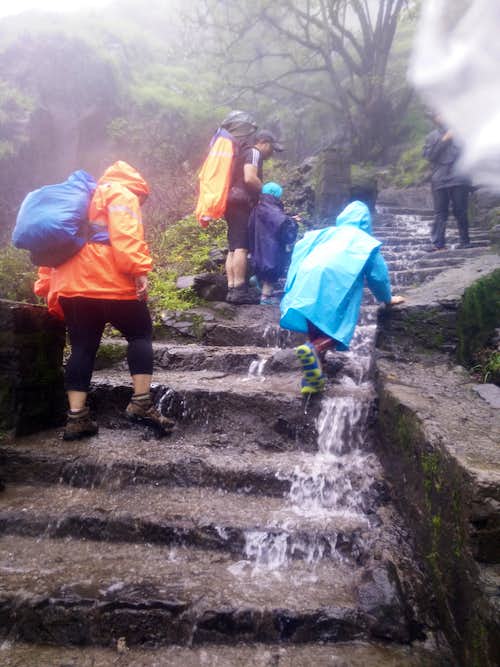 The entire valley below was engulfed in clouds, and it was a mesmerizing view everywhere. After about 15 minutes of hiking up the steps, we reached the main gate of the fort. As it was raining cats and dogs, we just had to change into something dry. So, in the cloud-engulfed fort, we made our way to the temple on the fort. Besides the temple, there was a huge pond, which I assumed would be quite deep. 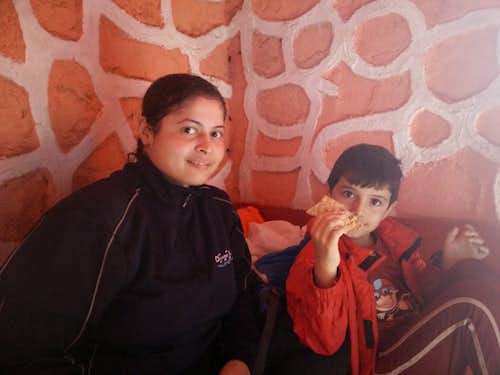 After getting dried up, and in comfortable clothes, we had our lunch, and drank plenty of water. Unfortunately, we didn’t have an extra pair of socks. So, had to put on the wet socks – both for myself and Yuvaan. And, I figured, even if we had dry socks, they would get wet as soon as we wore wet shoes. So, in a way – it was good. I was just concerned that Yuvaan doesn’t catch cold. 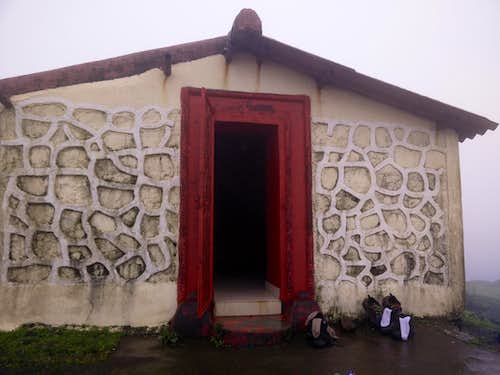 All wet boots - kept to dry

We decided to go around the fort, trying to see if there are any historical remnants of the times when this fort was used for multiple purposes. We saw another bigger temple, in which – herds of cows and buffaloes had taken refuge from the rain. 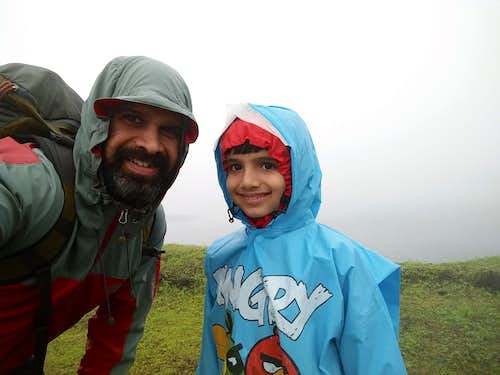 Two of us
Then, we walked over the entire length of the fort’s fortification wall. It was quite a long one, with adequate width for us to walk on, but on one side – there was a steep fall, a couple of hundred feet. A slip of foot would’ve meant – the end. 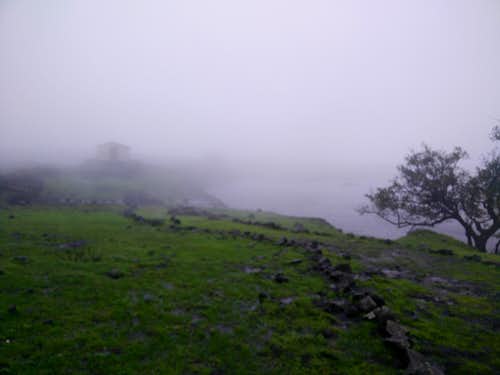 At the end of the wall, there was a huge cannon, which probably has been there since ages! It was christened “Laxmi Tof”, and Tof in Marathi – means cannon. It was a big one, and was supposedly the biggest one among the ones on the fort. 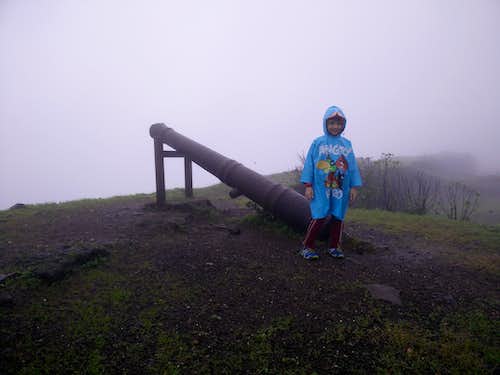 After having seen almost the entire fort, we decided to call it a day, and hike back down. The rain has partially stopped, and we thought of taking it as an opportunity. We hiked down the fort, amidst the chirping birds and music from flowing streams. And, to our luck – as soon as we got into the car, it started raining heavily again! 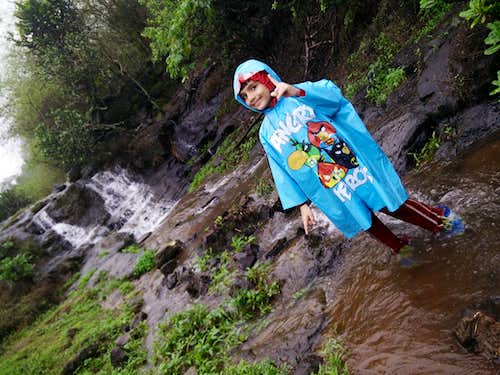 Story telling...
This way, we were lucky. However, another blow came to us, when we learnt that something snapped, and the car’s wipers won’t work. In this rainy season, how is one supposed to drive, without working wipers? But, Mahadik, being Mahadik – said – we should just carry on, and he would clean the glass with his hand, and then slowly drive with the parking lights on. This was scary and funny at the same time, but we really didn’t have much of a choice. 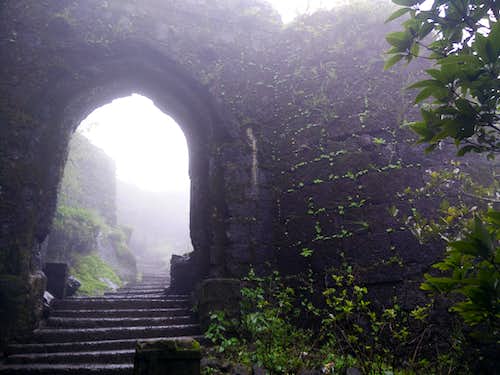 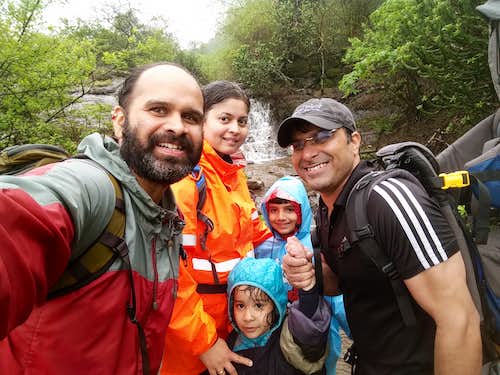 All of us - posing!
This way, we reached Bushi dam, and to our shock – the entire road was blocked by people. 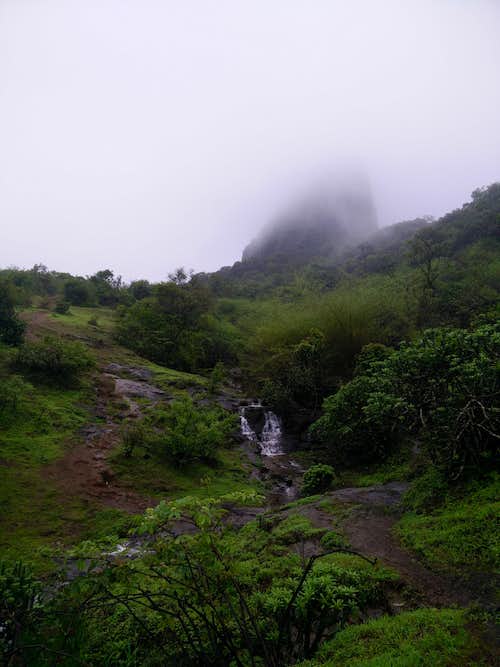 View of Korigad
People people everywhere – god knows what they were doing. 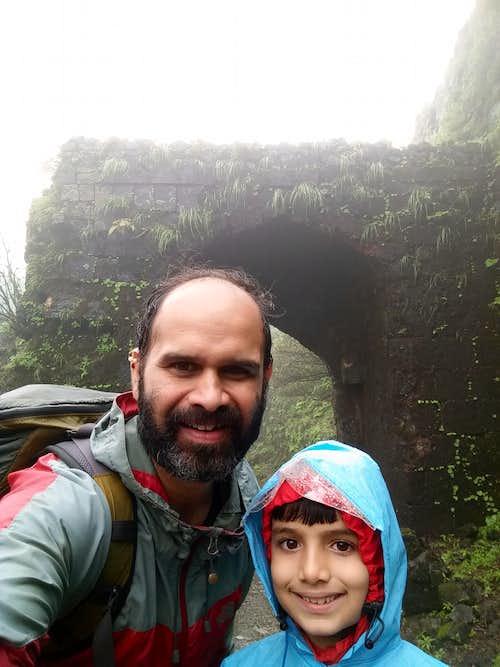 While descending down
But, this block led to a waste of almost one and a half hour, after which we could get free. All of us were so hungry that on the way to the highway – we stopped at a nearby McDonalds, and hogged on the burgers and fries with coke. With full tummies, we returned back home to Pune, with the wipers still in a non-working condition. But, once we hit the highway, the rains had stopped, so we were fortunate in a way. A nice scenic drive was the end of a day beautifully spent! 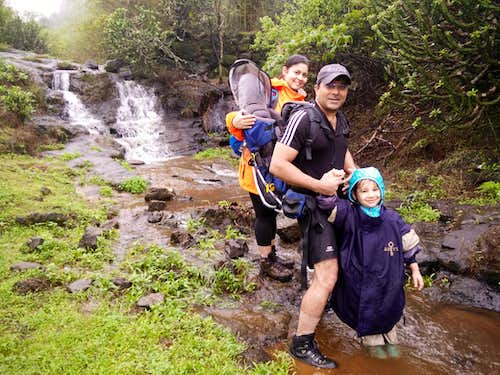