One of the most impressive and beautiful peaks in Polish Tatra area. You can reach the summit by marked route or by several difficult climbing routes. Koscielec has always been very popular both among hikers and alpine climbers. Seen from north Koscielec presents itself as an inaccessible spiry pyramid reminding medieval cathedral what explains its name ("kosciol" in polish means a church). First ascent: 1805 - Antoni Hoborski First winter ascent: 1908 - Mieczyslaw Karlowicz and Roman Kordys On the 8th February 1909 huge avalanche fallen down from from north-eastern slope of Maly Koscielec killed Mieczyslaw Karlowicz - young Polish symphonic composer and Tatra climber and explorer. After that tragic accident Polish TOPR - Tatra Volunteer Mountain Rescue Service was formed by Gen.Mariusz Zaruski. 1911 - Mariusz Zaruski and Stanislaw Zdyb make record performance for those times reaching the summit on skis. 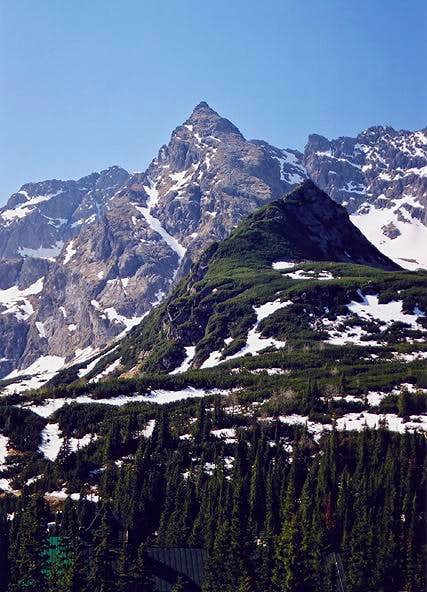 Koscielec and Maly Koscielec above Hala Gasienicowa The side ,north ridge of Zawratowa Turnia forms a prominent rocky massif of Koscielec which divides Gasienicowa Valley into two branches. Koscielec massif consists of 2 peaks separated by Koscielcowa pass(2115) : The main ,north peak of Koscielec(2155) and the southern one ,even a bit higher Zadni Koscielec(2162) North to the Karb Pass(1853) through which leads the most popular black marked route to the summit of Koscielec ,there is a lower extension of Koscielec ridge with rocky culmination of Maly Koscielec(1863). The whole massif is build of granite rocks typically for High Tatras

From Cracow take bus/train to Zakopane, then take bus to Kuznice. Now follow yellow or blue tourist marks, both go to Hala Gasienicowa where there is a huge mountain refuge "Murowaniec" (1500) and crossing of many marked routes . 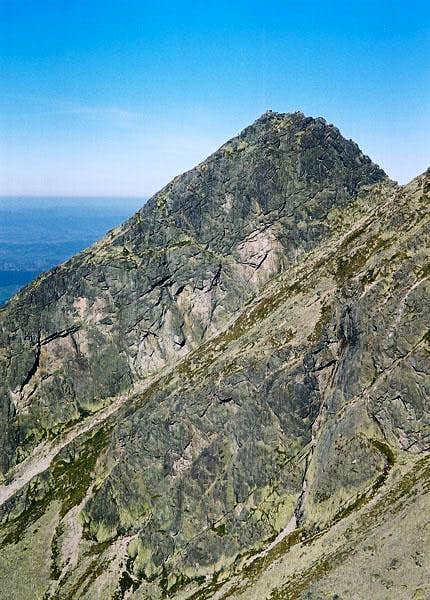 Koscielec - West Face Lots of interesting climbing routes on Eastern and Western walls of the massif . The best weather is on August and September . June - July frequent t-storms. In winter it depends on snow and usually very capricious weather conditions.

Lots of accomodation possibilities in Zakopane and the area from expensive hotels and luxury pensions to hundreds of private rooms ,hostels and camp sites . There is a camp site of Polish Mountaineering Assciation(PZA) , near the road from Murowaniec Chalet to Brzeziny. In Zakopane there are many camp sites. Climbers may also use the Chalet ( The price for the bed oscillates between 8 and 13 US$). For more information check this link : Murowaniec Chalet (english version)

This is Tatra National Park, so there are some strict rules of wildlife conservation (there are boards, in Polish, German and English) with lists of interdictions. Hiking is alowed only on marked routes. No fauna and flora can be disturbed or collected. Entry charge to the Park is about 1 US$. per day. On 21.12.2007 Poland and Slovakia signed Schengen Agreement and accessed to "open borders" Schengen Area, however one must remember that National Park regulations prohibiting crossing the border beside marked trails in the whole area remain in force.

Don't underestimate the mountain!In1962 on the summit ridge of Koscielec died Jan Dlugosz-one of the best post-war polish climbers.He had done many frst ascents in Tatras(f.e Wariant R on Mnich-the most difficult route on the mountain or new routes on Kazalnica's north-east wall)in Alps(f.e. Central Pillar of Freney on Mont Blanc with Christian Bonnigton and Donald Whillans)or in Caucacsus(new route on Dikh Tau).
So please be aware-Tatras are dangerous for everyone!!