Jalovec is not a mountain for (ordinary) skiing. The ski descent from this steep, sharp-edged rocky pyramid over its SE roof is allowed only to extreme skiers. But from Planica valley two nice options for tour skiing end below its summit ridges. The first one (steeper) is the tour through Jalovec couloir and the second one is the tour from Kotovo sedlo (saddle). Even in foreign guidebooks the Kotovo sedlo (in German: Kot Sattel) ski tour is recommended as one of Julian Alps classics.

In winter or spring, you will be able to drive into Planica valley only to the parking place at big ski flying devices (cca 925 m). From there you continue towards Tamar hut (Dom v Tamarju, 1108 m) either by the left road (for hikers, sledges etc.) or by the cross country track on the right. In any case, you will need for 200 m of altitude approximately 1 hour. 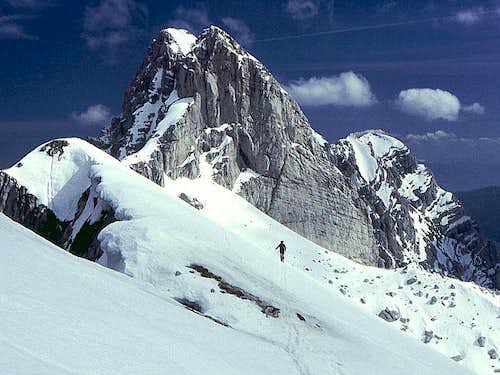 From Tamar hut you continue by the valley of Planica. After some 30 minutes you reach out of the forest and you continue by the right side (looking upwards) over moderately steep slopes (gravel in summer). It's a steady tour - straight forward, or, when slopes are steeper, in turns upwards. On the left we see the giant vertical walls of Mojstrovke, Travnik and Šite, on the right the slopes of Ponce - Vevnica - Kotova špica crest are a bit less steep. As the valley gets more narrow it gets also more steep. In many turns we are approaching the mouth of Jalovec couloir. If snow is not too hard or icy, we can do the whole ascent with skis.

Before reachinj couloir the slopes on our right open widely and we ascend over them on a broad plateau below Kotovo sedlo (saddle). It's quite usual to stop a little by the big rock, which offers a modest shelter - to have a drink of tea or a beer. Now the final 200 meters of ascent are ahead of us. We choose the highest point in the middle of the broad saddle. The slopes are a bit steeper again just below it, and so we reach the altitude of some 2225 m (the saddle is 2138 m). It's all we can do - choose the highest snow patch and prepare for a nice downhill.

We are skiing down by the same route - all the way down to the parking place, which means some 1300 meters.